Last weekend, a big fuss was made over Arsenal losing to Watford. Convicted thug, Troy Deeney, went straight to the nearest television studio, in his best court suit, to declare that Arsenal simply did not have the cojones.

Did Deeney stand there in the changing room, lamenting his team mates, telling them how they had let themselves down, their family down, the bumblebee mascot down, and how they did not have the cojones? Probably not. He probably drove straight to Birmingham for a few beers with his mates before stamping on the head of a defenceless student.

Troy found out how quickly the earth spins round. It is easy boasting about how you smash an opponent as soon as you come on the field when you win, but how about all them times you lose Troy?

The weekend showed just how tough the Premier League is. Manchester City apart, every other top team as showed a lack of cojones at some point.

On Saturday, Manchester United lost against the then favourites-to-be-relegated Huddersfield. The Huddersfield players showed a lot more class than Troy Deeney, as none went on TV abusing their opponents. It was Manchester United’s first defeat of the season. But an unexpected one.

There was also tears in Liverpool as the Scourers lost away to Spurs.

It was not just losing, but it was the manor of the defeat. 4-1.

Liverpool remind me of Arsenal, when they lose against a top side, they lose heavily, 4 against Spurs, 5 against Manchester City.

They have also dropped points against Watford, Newcastle and Burnley, and sit 9th in the league. Jurgen Klopp’s crown has slipped with a drifting win percentage. Now under 50% with a worse record than the likes of Brendan Rodgers.

No mention of their players lacking the cojones though.

Then we have Chelsea. The current Champions.

They showed some cojones on Saturday to come back from 2-1 down to beat Watford. But then the weekend before they played Crystal Palace, with 0 goals and 0 points this season. They lost 2-1. Having already lost at home to Manchester City, and that opening day defeat to Burnley, they sit with an identical record to Arsenal.

Do their players lack the cojones? Or does it just show that bar Manchester City, every other side is a little bit average. 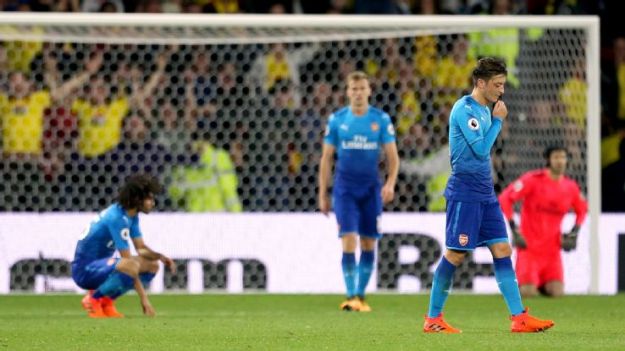 We then come to Arsenal, We know about Watford and Stoke, and that defeat to Liverpool. Lots made about the club in crisis, but we are level with Chelsea and ahead of Liverpool. A long way behind Manchester City though – and that is what is important.

Spurs got a good win against Liverpool to go level on points against Manchester United. But it was not too long ago that they were struggling to win at home – draws against Swansea and Burnley. They are in fine form at the minute, yet still they are closer to Arsenal 94 points ahead) then they are to Manchester City (5 points behind).

Very little talk about cojones when they failed to beat Burnley or Swansea.

Manchester City look awesome. But then Leyton Orient would look awesome if they spent over £500m in 3 summers, on top of the billion pounds they spent in the 6 or 7 years previous.

With what they have spent recently, Manchester City should be winning titles every year. There last success in the league was 4 years ago. And they have just a single League Cup since.

We are not giving ourselves the best chance of success. At least if you try, then fail, at least you have tried. In recent transfer windows, we have not tried.

This season, every side will drop points against teams they really should beat. It happens every season. It is why the bookies are rich and the punters poor.

The only side that looks infallible so far is Manchester City. But then we are only 9 games in.

An early prediction, Manchester City will further ahead of second, than second is ahead of 6th. The other 5 sides are all a similar level of averageness – even if the press like to paint one club in crisis and the other as brilliant.

It will be a rollercoaster of a season.

9 thoughts on “Which Premier League sides lack the cojones?”