When he joined in January, there was plenty of talk that Pierre-Emerick Aubameyang  was a disruptive influence.

There was talk that his arrival would cause friction with between the Gabonese striker and the man bought in the summer, Alexandre Lacazette. That two players competing for one position, and one with the ego of Aubameyang, would result in the French striker being unhappy and leaving.

Calling Aubameyang a disruptive influence with an ego was basically lazy journalism.

They saw a young black man with spiky hair and tattoos who liked sports cars and jackets and assumed he had a massive ego, without really knowing the player. It was labelling, the same we see with Raheem Sterling.

Every multi millionaire footballer has a top of the range car, usually more than one, but it seems only certain players are criticised for it. Usually young black players.

They also claimed he was a disruptive influence. But there had no evidence of it. Just hearsay. Even though those that knew him, or were close to the Dortmund set up debunked the rumours. They said he had a couple of issues over the years arriving late for training after visiting Milan or Paris, but that was all.

He was a team mate. A jolly character who bought people together.

The press ignored the facts and wrote their stories for hits, clicks and advertising revenue.

Instead of competing against each other, seeing each other as rivals creating friction, Aubameyang and Lacazette have actually struck up a bromance, and it should not be a surprise to anyone. 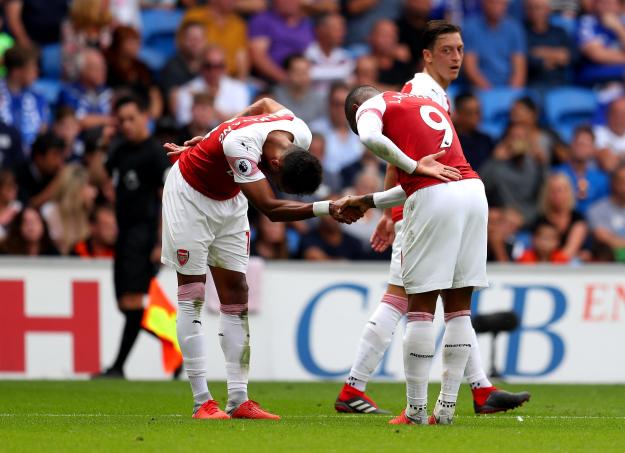 Aubameyang and Lacazette were born just two years apart, they are both in their late 20s adjusting to life in a new country.

Lacazette was born in Lyon, France, spending his entire life in the French city prior to moving to Arsenal. Aubameyang meanwhile is much more travelled in his career.

Aubameyang’s career has taken him from Italy, to France, then Germany and now England. What is often forgotten about is that whilst he plays for Gabon he was actually born in Laval, France.

He lived in France for 17 years before moving to Italy to join AC Milan’s youth set up. They then loaned him back to French clubs before selling him to Saint-Étienne in 2011.

He is the son of former Gabonese captain Pierre Aubameyang, but is as much French as he is Gabonese.

Like Aubameyang, Lacazette is also from a French immigrant family. His family originate from Guadeloupe.

So here you have two men of similar age, both bought up in France to immigrant families, both the youngest children, both living in London for the first time. Is it really a surprise that they are drawn to each other, seeing themselves as friends rather than rivals?

They clearly socialise together, and their off the pitch connection came through during the game against Cardiff on Sunday where they linked up well.

Playing the pair up front together, at the sacrifice of either Mesut Ozil or Henrikh Mkhitaryan is an exciting option.

2 thoughts on “Bromance of Arsenal strikers”