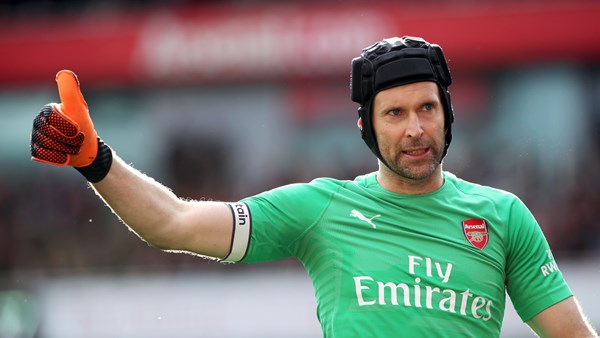 Arsenal are facing a goalkeeping crisis.

Bernd Leno has been a top signing and has established himself as Arsenal number one ahead of Petr Cech.

At the end of this season Petr Cech’s contract expires. Arsenal have a decision to make whether to offer the veteran stopper a new contract or let him see out his career in France or back in the Czech Republic.

On loan at Napoli is David Ospina. The Colombian’s contract with Arsenal is not due to expire until 2020.

If Arsenal decide to dispense with the services of Cech, it would make sense that Arsenal keep Ospina as number 2 next season.

The huge problem is beyond that. Arsenal do not have a natural number 2 coming through.

Imagine the scenario; Leno get’s injured in the first game of the season. Out of for entire campaign. A number 2 needs to be able to step up into the role of number 1. Martinez is not that.

Manchester City’s number 2 is Claudio Bravo, who spent 2 years as Barcelona number 1 and was Goalkeeper of the Tournament at the 2017 Confederations Cup.

In summary, to be a number 2 at a top club you need to be an experienced goal keeper, an international. Martinez is neither of these.

Behind Martinez is Matt Macey. The tall Englishman is now in his mid-20s.

Macey is performing well at Plymouth, but it is doubtful if he would have what it takes to be Arsenal Number 2. I would expect him to replace Martinez as number 3 next season.

The crisis Arsenal are facing is below first team level.

According to the club website, we have one goal keeper in our academy. 23-year-old Macedonian Deyan Iliev. He is another, like Macey and Martinez, who does not have what it takes to make it to the top.

After Iliev, the next goal keeper in line is talented 17-year-old Arthur Okonkwo.

Okonkwo has a bright future, with many who watch the youth teams claiming he is the best young keeping prospect we have had since Wojciech Szczesny. But he is 17. He is still a baby in goal keeping terms.

There is a 6 year age gap between Iliev and Okonkwo and Arsenal need to fill that gap.

Over the last 12 months, Arsenal have released a lot of goal keepers who had previously filled this gap.

Joao Virginia joined Everton this summer. The 19-year-old was rated by many at the club. Arsenal also released Ryan Huddart (21), Hugo Keto (20) and Alex Crean (19). These 4 goal keepers leaving have left a huge gap between Iliev and Okonkwo – and an even bigger talent gap between Cech as Number 2 and Okonkwo at the bottom end.

Last summer Arsenal signed Estonian Karl Jakob Hein. He is just 16 and was signed to fill the gap behind Okonkwo.

Over the summer, what Arsenal need to do is fill the gap between Iliev and Okonkwo.

It is likely that Iliev will leave, alongside either Martinez or Macey. That will mean 8 years between Macey and Okonkwo.

Sven Mislintat’s scouting team, and the youth scouts, will be scouring the UK and Europe for the top 21 year old goal keepers.

Someone (or even 2) that could come in and take the place of Iliev in the U23 team. Someone who within 12 months could be putting pressure on Macey or Martinez to become Arsenal number 3. You would be looking at them being 20-22.

It will be a challenge to find someone.

You will not be able to sign someone currently doing bits in a senior team. It is unlikely they would be happy stepping down from first team football to academy football – unless that are outside the top leagues in Europe.

You could pull a first team goal keeper from Poland or Norway, for example, but you are not going to be able to target someone like Alban Lafont from Fiorentina.

Although Arsenal might completely rip up the structure of the club and target someone like Lafont or Bartłomiej Dragowski (another Fiorentina youngster) and have them fill the duel role of Arsenal U23 keeper, and Arsenal 3rd choice keeper.

Arsenal will address the skills gap in young goal keepers this summer. It will not be a major signing, but it will be someone who can come in at U23 level and push for the first team squad within 12 months.