In a team with nine changes from the Olympiakos match last Thursday, and of those players, six are under twenty years of age (or under). Our line-up tonight shows Mikel Arteta’s intent to put youth at the helm in an important match here at Fratton Park this evening. The facts are stark and plain: win, and we are in the draw for the quarter-finals of the oldest cup competition in the world; lose and we face an uphill struggle in order to finish in the European places of the Premiership for next season. It is as simple and cut and dried as that.

Right from the start, the home side put us under pressure, which certainly tested our defensive capabilities somewhat. Lucas Torreira was carried off the pitch after, what initially appeared to be, a simple bread-and-butter tackle executed by defender James Bolton and was replaced by Dani Ceballos in the fifteenth minute; we then attempted to impose a possession-style match on our opponents which didn’t work, as all it did was serve to prove that our football became dull and fairly pedestrian. The worrying thing was that despite our attempts to break out of our half and launch assaults on the Portsmouth goal, they still managed to regroup and apply pressure on our goal, stretching the Arsenal defenders wider and wider across the pitch. Amazingly, and thankfully, we took the lead three minutes into injury time, when a superb Reiss Nelson cross from the right found Sokratis Papastathopoulos, who wasted no time in firmly placing the ball in the back of the net with a strong right-footed shot which ultimately meant that we went into the half-time break in the affirmative. 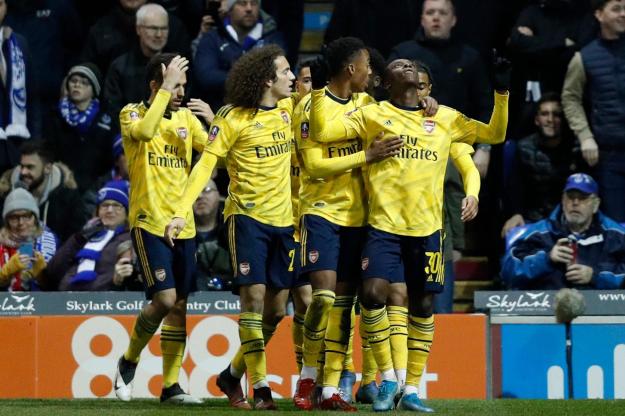 We started the second half with renewed confidence; it’s amazing what a goal just before the break can do! Anyway, six minutes after half time, another Reiss Nelson cross from the right saw Eddie Nketiah bundle a right-footed shot into the roof of the net to put us two goals ahead on the night. With the luxury of a two-goal lead, we were able to apply basic game management to the proceedings with a possession style that saw us control the game now. With twenty minutes of the match remaining, Reiss Nelson’s cross was met by the head of Gabriel Martinelli, which went high and wide, that was a missed opportunity for us to grab a third goal on the night. Just minutes later, young Bukayo Saka twisted and turned the Portsmouth defence inside out, and was unlucky not to score with his ascending shot that Alex Bass athletically tipped over the bar for an Arsenal corner. As the game was making its way to a natural conclusion, we found ourselves in the enviable position of being comfortable in an away cup game. Joe Willock was substituted for Granit Xhaka after eighty-six minutes, and the introduction of fresh legs in midfield only served further our desire to see the match out with a victory, which, despite one or two forays on our goal by the home side that dissolved into nothing, is exactly how the match finished here on the South Coast.

Despite a sluggish early start with a few close calls, we did enough to win the match and become the first club this season to reach the quarter-finals of the FA Cup tonight. Reiss Nelson was an absolute revelation on the right, providing excellent, accurate crosses for the strikers to run onto; indeed it was his cross that enabled Sokratis Papastathopoulos to open the scoring in the dying moments of the first half. Pablo Marí was impressive on his first team debut, as was Eddie Nketiah and, although he was on the pitch for the most briefest of times, Ainsley Maitland-Niles, who replaced the aforementioned Reiss Nelson with a few minutes left on the clock. David Luiz showed mature leadership skills to inpire the Young Guns, as did Sokratis Papastathopoulos too. All in all, it was a clinical, professional victory, one that we desperately needed after the debacle of last Thursday’s defeat at The Emirates. Remember everyone, keep the faith, get behind the team and the manager, as this season is going to be crucial for our future success in all competitions. Stick with the winners. Our next match: West Ham United at The Emirates on Saturday, 7th March at 3.00pm (Premier League). Be there, if you can. Victoria Concordia Crescit.