After the appalling human cost of the First World War. in which thousands of men were maimed and seriously injured, a unique and original idea was thrust into action by Jean-Bernard Lévy, owner of rising French football club Racing Club de France in the summer of 1930. He proposed an annual charity match between the emerging Parisians and Arsenal Football Club of London, England, who had just won their first FA Cup and were on course for the First Division Championship (their first triumph) the following season with all proceeds going to injured and disabled French servicemen from the Great War which finished twelve years previously. 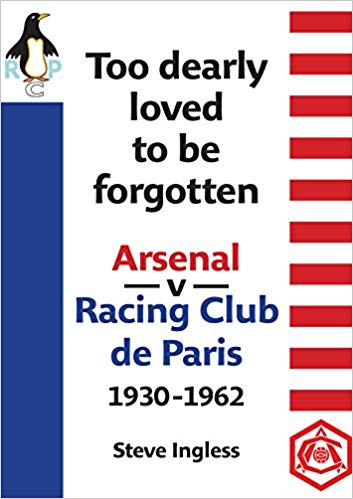 The first match was truly the stuff of legends; after being 1-2 down at half-time, HerbertChapman’s imperious Arsenal team literally steamrollered their hosts and ended up 7-2 victors at the end of the match. Because of the frenetic Parisians (and also the large amount of money raised), Arsenal were invited back again the next year, and every year after that until 1962, allowing for the hiatus of the Second World War of course.

Only on two occasions did Racing Club de Paris play at Highbury; in 1932 (just after their name change) and again in 1954. Of the 27 matches that were played, Arsenal were victorious on 19 occasions, Racing Club four, and the same amount of matches were drawn. All this information (plus much more) has now been gathered together in a unique book, Too Dearly Loved To Be Forgotten: Arsenal v Racing Club de Paris 1930-1962 by Steve Ingless.

This book not only tells the story of the matches between the two clubs, but also a history of the life and times of British and European football through its most crucial and formative years; without many of the events and footballers mentioned here, the game today may well have been a radically different sport

to the one served up on a weekly basis ten months of the year through different mediums. The publication is lavishly illustrated with rare photographs, medals, programmes and contemporary cartoons; there is also eight colour pages as well as an extensive records section. All in all, it’s a superb addition to any football library, and a must for all Arsenal supporters who are hungry for knowledge about this wonderful club’s illustrious history.