Arsenal majority shareholder Stan Kroenke has made a cash offer to buy all remaining shares int he club in a deal worth £1.8bn.

Kroenke, who owns 67.09% of Arsenal through KSE UK, has received “an irrevocable undertaking” from Russian billionaire Alisher Usmanov to sell his 30% stake in the club.

Stan Kroenke said: “We at KSE are moving forward with this Offer leading to 100% ownership of the Club. We appreciate Mr Usmanov’s dedication to the Arsenal Football Club and the storied ethos and history the Club represents.” 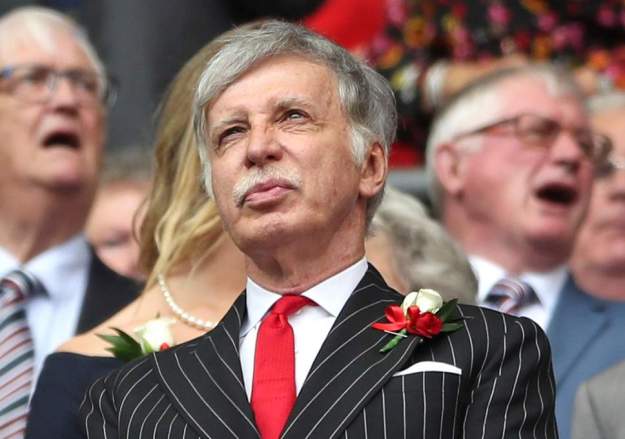 Kroenke’s holdings in the club began with an initial 9.9% bought from ITV plc in April 2007. Initially treated with hostility, Kroenke fell into favour with the board upon when Russian billionaire Alisher Usmanov and London-based financier Farhad Moshiri bought a stake held by former Arsenal vice-chairman David Dein through Red & White Holdings.

Kroenke brought his stake in the club up to 20.5% following a purchase of shares from fellow director Danny Fiszman.

On 1 May 2009, Arsenal announced that Kroenke had bought a further 4,839 shares from the Carr family, including Richard Carr, also a director, which made him the largest shareholder of the company with 28.3%.[17] On November the same year, this increased to the maximum 29.9% limit.[18]

A rival bid for the club came from Red & White Holdings, as Usmanov grew his share in the club to 18,204 shares (29.25%) of the club. This is the largest single stake owned by a non-board member.

This led to press speculation of a bidding war between Kroenke and Usmanov. However, Kroenke agreed not to purchase more than 29.9% of the club until at least September 2009, while the rest of the board agreed not to consider a sale of their shares to “non-permitted persons” until at least April 2009, and had first option on each other’s shares until October 2012.

In April 2011, Kroenke extended his ownership of the club by purchasing the shareholdings of Nina Bracewell-Smith (15.9%), Danny Fiszman (16.11%) and other directors of the Arsenal board, taking his shareholding to 66.64%.

In recent weeks, there has been speculation that Usmanov was willing to sell his shares in Arsenal.

There is plenty to fear of Kroenke owning 100% of Arsenal, the main one being that if he owns every share, he could take the club private. That would lead to the clubs money being his money to do with as he wishes. He would no longer need to submit public accounts, and we as a club would be at the mercy of him.

With Ivan Gazidis set to depart for AC Milan and Arsene Wenger having left the club after 22-years, Kroenke buying the entire club will be just create even more turmoil in the boardroom.