Everyone happy this morning? I certainly am. And its not just because I got to have a freshly poured pint on Saturday.

Whilst the couple of pints of Birra Moretti I had Saturday evening went down fabulously, it was what happened earlier in they day that made my weekend.

Arsenal won, away from home, keeping a clean sheet.

2 weeks ago when we lost to Brighton, many feared the worst.

Up next was a trip to Southampton, which had not been a happy hunting ground. That was followed by the FA Cup tie away to Sheffield United. And then we had to brace ourselves for a tough run of playing Wolves, Leicester, Tottenham and Liverpool in the space of 11 days.

We are now nicely back in the running for a European spot through the league and in the FA Cup semi-final.

7th will be enough for Arsenal to make the Europa League. It is the position we currently occupy, and just 3 points off of Wolves in 6th.

They are queuing up behind us, however. With Sheffield United and Burnley just behind. Then a bit of a gap to Tottenham in 10th.

We play Spurs next Saturday. A game hinged with sadness as it would have been our first trip to their shiny new toilet bowl. We will just have to wait for next season.

I read yesterday that St Totteringham’s Day could actually happen next weekend.

It would require Spurs to lose their next 2 games (home to Everton, away to Bournemouth) and Arsenal to beat Leicester. Arsenal would then need to take all 3 points at the Edmonton Community Stadium next Sunday.

In a season where we have sacked a manager for the first time in 23 years, finishing above Spurs would be seen as a small achievement.

When Jose Mourinho took over, their fans all got a little bit excited.

“We have the 3rd most points in the league since he took over”.

They have since won just once in 6 games, and lost 5 in their last 12.

Meanwhile Arsenal have gone from strength to strength under Mikel Arteta.

Bar the disappointing results against Olympiakos in the Europa League and Brighton in the Premier League, Arsenal have been magnificent.

12 wins from 21 games is a solid start to his managerial career. Anyone who can not see the improvement under Arteta is either deluded or agenda ridden.

The improvement can be seen both on the pitch and our results.

Players seem to have really bought into what Arteta is doing. They have adapted quickly to the change in formation, responded quickly from the poor result on the pitch, and seem engaged on the pitch. 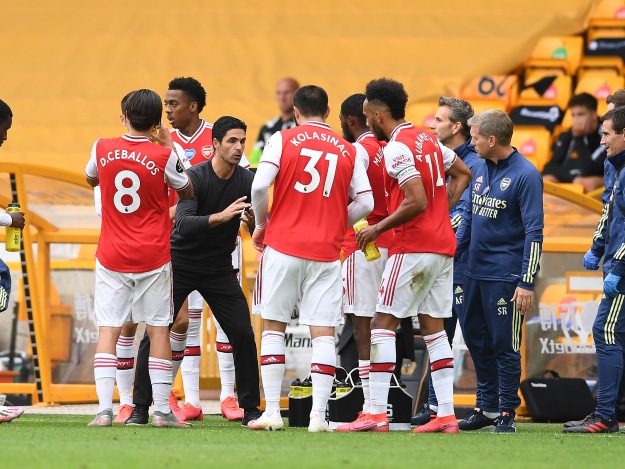 The form of Granit Xhaka, Ainsley Maitland-Niles and Shkodran Mustafi has been pleasing.

3 players who would many would have had down as leaving this summer have stepped up their game.

The way Arteta is dealing with Matteo Guendouzi and Mesut Ozil also shows his influence.

Under Unai Emery, the manager v Ozil become a huge talking point, splitting the squad. This time round it seems everyone is behind Arteta and his decision making.

If people still deny the improvement under Mikel Arteta, just take a look at the league table pre and post Arteta: 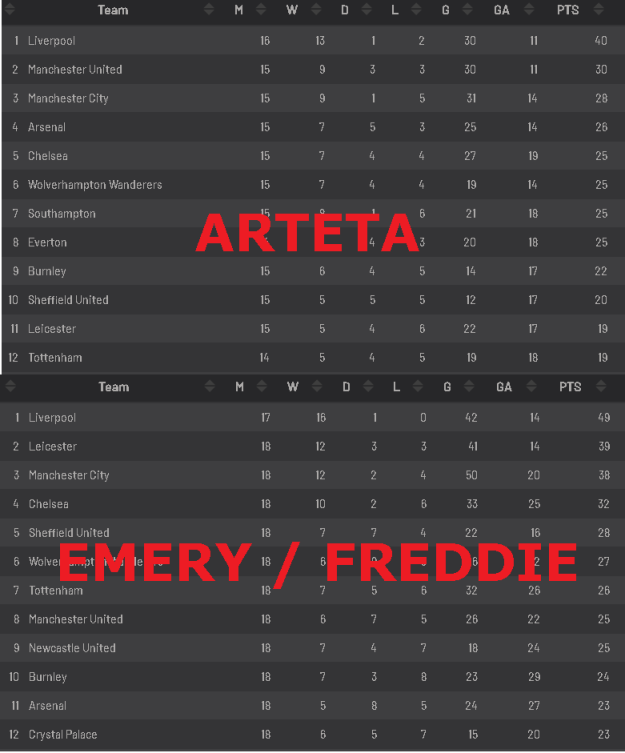 Under Emery and Freddie Ljungberg, Arsenal were averaging 1.27 points a game. That increases to 1.73 under Arteta.

To put that in perspective, if Arsenal had averaged 1.27 points a game throughout the season, we would be on 42 points. That would have us 13th.

Over a 38 game season, the difference in points would be 16. Yet some will say we have not improved…

Arteta has got Arsenal ticking again. There will be more bumps in the road as recovery continues, but there are plenty of reasons to feel more positive this morning.

I am off to Wetherspoons for a breakfast.

Have a good day,