The victory over Brighton took us to 7 games unbeaten in all competitions. Winning 6 of the 7 and drawing away to Chelsea.

Admittedly, bar Chelsea we have played no one of note, but you can only beat what’s in front of you, and we are doing exactly that.

I do not see too many people criticising Man U for only having played poor teams this season.

After the disaster of Stoke & Liverpool, this run between the two international breaks has boosted our confidence and shot us up the table, as well as put us in a very comfortable position in the Europa League – allowing us to rest everyone for the home tie against Red Star Belgrade; 2 days before we travel to Manchester City.

We sit quietly in 5th, level with Chelsea and a point behind Spurs, ahead of Liverpool. The Manchester clubs are 6 points ahead of us, but we are in the mix.

With upcoming games at Watford and Everton, before a home game to Swansea, we have a great opportunity to keep the run and close that gap at the top at the magically 10 game mark.

We are title contenders.

Despite the run that we are on, some people just seem to like to moan.

We beat Brighton 2-0, and at no point did we look at conceding a goal. And people have labelled us “boring” and “predictable.”

The same people put George Graham on a pedestal, a man who made his career on being boring a predictable and gaining 1-0 wins.

Give me boring and predictable Arsenal over exciting Liverpool any day of the week. The last 7 games for the Scousers have seen 22 goals scored. They have won just 1. 3 points is 3 points. And yesterday we got 3 points. Liverpool got 1.

9 Premier League home wins in a row, and people are sitting around moaning. Get behind the team. 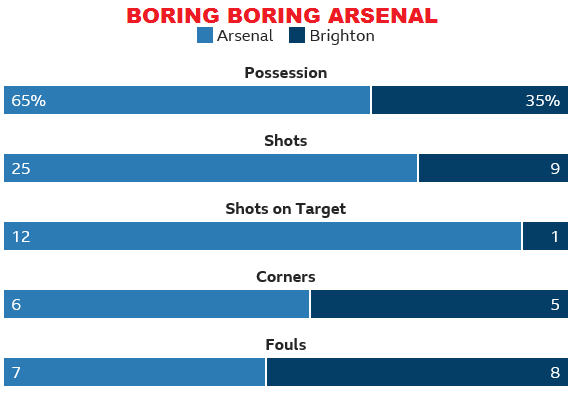 Be careful what you wish for.

You will be pleased to know that I am going to take two weeks off blogging during the international break.

The blog has set new PBs in readership this year but I need a break. I am sure some of you will be pleased with that.

Have a good two weeks

4 thoughts on “Brighton, Moaning, Alex Oxlade-Chamberlain and the International Break”