Well that was an interesting match wasn’t it…

Somehow, despite every senior player on the pitch being atrocious, we got through, we won, we are in the hat for the next round of the Copacabana Cup after beating Norwich 2-1 in Extra Time.

Hero of the night was Arsenal youngster Eddie Nketiah who came off the bench to save the day for Arsenal. 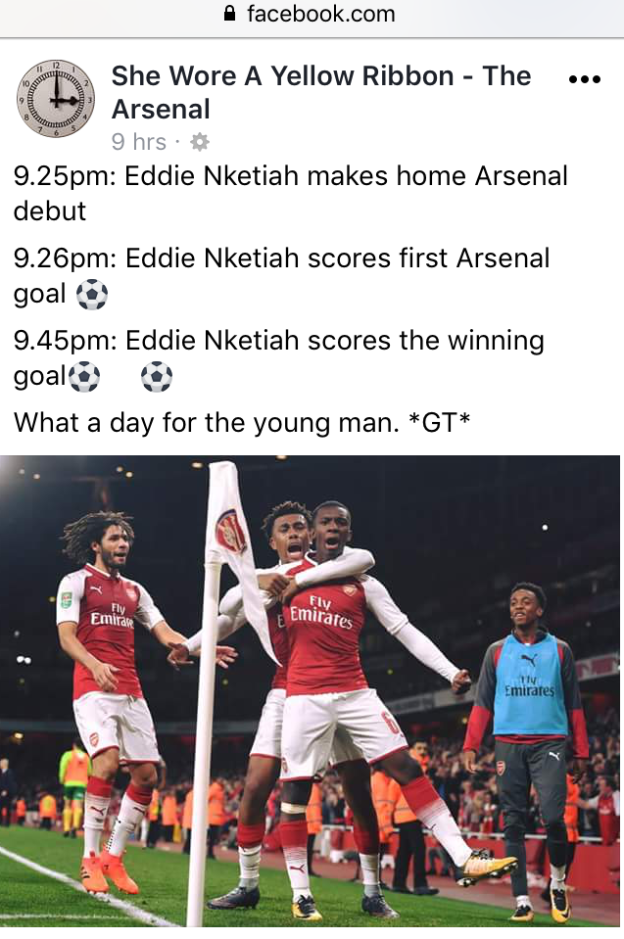 Over the years I have debated with GC on numerous platforms about having local lads in the team. I have always been of the opinion that if they are good enough, they will get in the side, and they we are a global football team in a global game chasing top honours. We are not care in the community, we should not deliberately have a weaker side just to accommodate local lads.

Yes, in theory, I would love us to be like an Athletic Bilbao, where we have 11 lads all from Islington in the starting XI, but then we would be a mid table side with no hope of success, like Bilbao.

But it was pleasing to see yesterday Arsenal give game time to 10 academy graduates.

In the days of modern academy’s, not all 10 were local born lads who have been with the club since they were 8.

Goal keeper Matt Macey, making his first team debut, was signed from Bristol Rovers at the age of 18. At just 23, he put in a solid performance with a couple of exceptional saves. A critic would say he should have been out quicker for their goal, but overall he can be please with his Arsenal debut.

Macey became the first English goal keeper to play for Arsenal in a senior game at home since moving to the emirates Stadium.

Reiss Nelson – from Elephant and Castle – impressed once more in the wing back position. With Arsenal pretty much through in Europe, I would not mind him starting a few games behind the striker, as he is clearly a talented attacker. And still just 17.

On the other side of the pitch, Essex boy Ainsley Maitland-Niles (from Ilford) did well. He is clearly not a left wing back, and a few of our attacks broke down when he had to cut in on the right side. If we do give Nelson a chance higher up the pitch, I would like to see Maitland-Niles move across to the right where he will be more comfortable. He could prove to be good long-term cover for Hector Bellerin.

Chuba Akpom, now 22, will probably be frustrated by his nights work. The Canning Town lad did not play poorly, infact him coming on injected much needed pace at the top of the field. His frustrations will be that whilst he made his debut 3 years ago, he is still awaiting his first goal, whilst Nketiah got two on his debut. Akpom’s future is shakey as other younger strikers begin to impress.

Eddie Nketiah has only been with the club for 2 years, having been released by Chelsea in 2015. The Lewisham lad took both his goals very well, and I am sure there will be plenty of loan offers from Championship sides on the table in January.

What a night for @EddieNketiah9. So happy for him and not surprised at all!

Josh da Silva (another Ilford born Essex boy) and Joe Willock (Waltham Forest) also got another appearance under their belt, both coming on in the second half of Extra Time.

Arsenal also had 3 senior players on the pitch who came through the youth system.

Stevenage’s finest, Jack Wilshere continued his rehabilitation playing 114 minutes. This after a 15 minute run out on Sunday.

The extra time probably means he will now not play against Swansea on Saturday as Arsenal take it slowly with him. Everyone’s hears would have been in their mouths at one point when it seemed he was holding his groin, but he battled through.

Francis Coquelin, who came through the academy system alongside Wilshere – via France – had a poor game. His technique was shown up once more, and he has to realise that he is not a playmaker. He should be told not to cross the halfway line.

The final academy graduate, and most successful in recent years, was Lagos born Alex Iwobi, who has been with the club since he was 9. He had a mixed game, but it must be remembered he is still just 21. Not much older than many of the other youngsters, yet considered a senior player.

Writing this blog, it is interesting how far and wide young players now come from. The dream of XI Islington Boys will never happen. The 10 academy lads did have a lot of Londoners in it, but the closest you get to a proper local lad is Joe Willock, who was born not too far from the Hale End Academy.

It is actually interesting walking through Walthamstow Central Station at about 7pm. You see a load of youngsters in their Arsenal tracksuits getting on the train home, to whatever part of London the reside in – the journey to Lewisham or Elephant & Castle that Nelson or Nketiah would have made as teenagers is an hour long one.

None of the Arsenal youngsters performed poorly, but they were nearly let down by their senior pros.

Olivier Giroud did nothing. He struggles when teams defend high.

The current formation does not suit Theo Walcott. He is not an Alexis Sanchez. He does not have the technique to play in tight spaces behind the striker. If we are going to continue mirroring the formations no matter who plays, Walcott surely has to drop to the bench.

Coquelin, as previously said, was poor. He thinks he is an attacking player, but too often play breaks down with him in advanced positions.

Wilshere and Iwobi also had poor games. Neither seemed to know who was playing central midfield and who was supposed to be attacking.

All 5 had poor games, and none of them will be screaming to start in the Premier League team.

One senior player who did look good was Mathieu Debuchy.

Debuchy has had an unlucky time of it at Arsenal, with injury and the development of Hector Bellerin meaning that he became surplus to requirements.

He has thrown his toys out of the pram more than once and his time at the club looked to be over this summer. But he played well yesterday.

As long as his attitude remains positive and he stays fit, he provides good cover for Bellerin at right wing back, and on the right hand side of the defensive 3. I do not think he lost a header yesterday.

Debuchy should look at Nacho Monreal and the way the Spaniard has re-invented himself and, despite being 32, take the same positive approach.

On the two points that Norwich fans are moaning about, it was never a red card for Mohamad Elneny. The Norwich player was a long way from goal, Holding was up with play, and the Norwich player cut infront of Elneny.

What could Elneny do? Anyone who drives knows that if, on a motorway, a car swerves infront of you and slams on the breaks, no matter how quick you reactions are, you will go into the back of them.

As for the penalty, there was almost no contact. He did not pull him back. He did little wrong. An example of the fact that contact does not mean it is a foul.

I was impressed by 20 year old James Maddison. I first saw him a couple of years ago as a teenager playing for Coventry, and he looked very comfortable on the ball. He would not have been out of place in an Arsenal shirt last night. The lad has a big future.

So we are in the quarter final of the only domestic trophy Arsene Wenger has never won. Manchester United and Man City are also already in the hat, with Chelsea and Spurs to play tonight.

The big clubs are often criticised for not taking the tournament seriously, but there is going to be a big presence from those sides in the QF.

Too early to be dreaming about another trip to Wembley?

The rememberance t-shirts are up on the shop now..
Youths, ladies, mens upto 5xlhttps://t.co/UU8goaMVBO