I know I am in the minority, but for years I have been a fan of Theo Walcott.

Injuries aside, he is one of the most underrated players, not only at Arsenal, but in the Premier League.

His issue is that he is not a pretty player. There are no step overs, he does not make the highlights reel, he is a very basic player who relies on pace and finishing.

Over the years, I have seen people rate the likes of Alex Oxlade-Chamberlain, Andros Townsend and Yannick Bolasie above Theo Walcott. These players are a lot better on the eye then Walcott, and someone like Bolasie shows more tricks in a single game than Walcott does in an entire season.

But then a trick, a bit of skill, is only worthwhile if it leads to a goal – whether it be a goal for the individual, or contributes to a team mate at the end. A bit of skill that leads to nothing is pointless. It is showing off. It is something for the highlight reel.

Take Bolasie. He shows incredible skill, step-overs, fakes, dummies, yet he has just 10 Premier League goals to his name in 103 appearances. That is less than 1 goal in 10 games. What is the point of having that much ability if it leads to nothing?

Sadly, in the Banter Boys era of football, where fans get excited over a GIF of a player nut mugging an opponent, someone like Bolasie becomes vastly overatted, to the point sides are willing to spend £30million+ on a player who does not score, does not create, yet looks good on YouTube.

Walcott averaged 1 goal in 4 in the league, 1 in 3.5 in all competitions. These are statistics that very few wingers in the Premier League have battered in the last 10 years. Walcott has a better goals to games ratio than Arsenal legend Freddie Ljungberg.

Last year, Walcott scored 19 goals in 37 games. That was more than the likes of Raheem sterling, Marcus Rashford, Alex Oxlade-Chamberlain, Danny Welbeck and Jesse Lingard. Yet these players are often put above Walcott as being better, being more influential.

Saying that, I feel Walcott’s time at Arsenal is quickly running out. His issue is not his own talent, he is still a clinical finisher, although his pace has dropped a little, but where he fits in within the current formation.

With Arsenal playing 1 up top, and a narrow two behind him, Walcott does not have the attributes to play in any of the current 3 attacking positions.

Despite early protests that he was a striker, Theo Walcott is not an out and out striker. Whilst he can be dangerous through the middle, he does not have the hold up play to be up top on his own.

The current holders of the two behind a single striker are Alexis Sanchez and Mesut Ozil. Walcott is no where near as good as these players. And in that position, he is also behind the likes of Alex Iwobi, Aaron Ramsey and Jack Wilshere. 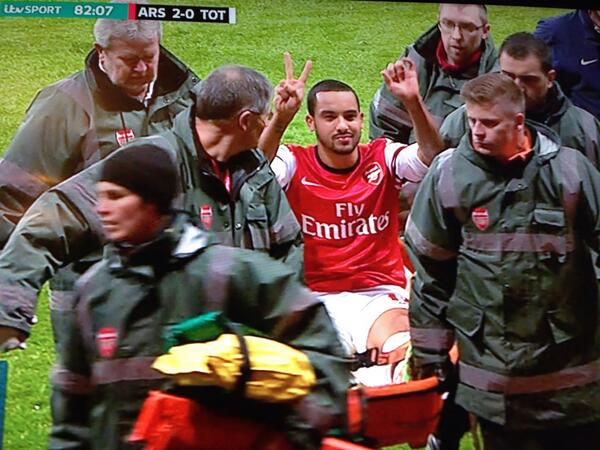 Walcott does not have the technique, close control or passing ability to perform in the tight areas that Ozil and Sanchez thrive in.

Against Norwich, playing behind Olivier Giroud, Walcott was awful. He only looked a threat when he drifted outside and found some space – leading to a few marginal offside calls.

But in the 3421 formation, you can not afford one of the 2 behind the striker to want to spend 90% of his time advanced, on the last line. You need them to get involved in the build up play. To drop deep and create. This is not using Walcott to the best of his ability.

A bit like shoehorning midfielders into the wrong position, playing Walcott in the position he did against Norwich felt like a case of having to give Walcott game time rather than playing your best available players in their best position. The likes of Joe Willock or Reiss Nelson would have done a much better job in behind Giroud. Or push Jack Wilshere alongside Alex Iwobi in that position.

Playing behind a striker is just no Walcott’s game – I remember England tried this once to disastrous consequences.

None of this means Walcott is a bad player. 19 goals last seasons shows he is a good player. All this shows it Walcott is struggling to find a place in the current team, and if 3421 is going to be a long term formation, then Walcott becomes surplus to requirements – in the first team at least.

Where Walcott will still be important is he is still our best right winger. Better than Welbeck, Iwobi, Nelson and more. If we are chasing a game, and are looking to change formation from 3421 to 433, Walcott is the option to bring on at the right hand side of the front 3.

No matter what you might think of him, Walcott is more likely to get a goal than Welbeck or Iwobi. So Walcott still has a job to play within the squad.

The problem then comes to when we play the B team in the Europa League and League Cup.

Do you play Walcott out of position, to the detriment if the team, giving him game time so that he remains sharp and ready to perform when called upon for the A team. Or do you give the B team the best chance of winning the League Cup (or Europa League) and drop Walcott completely and just hope that he does not rust up due to lack of game time?

What is for sure is I would be very surprised if Walcott is at Arsenal for another longer than another 18 months. He has just become surplus.

The rememberance t-shirts are up on the shop now..
Youths, ladies, mens upto 5xlhttps://t.co/UU8goaMVBO