Yesterday I discussed about how being the wrong side of 30 does not suddenly stop Pierre-Emerick Aubameyang by being a top class striker.

A look around the top scorers of Europe tells a story of the “old men of football” outperforming the youngsters: 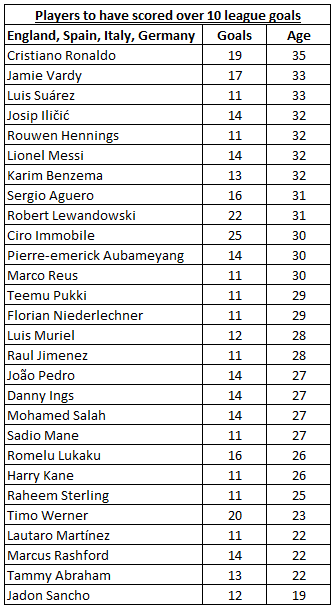 The top two in England – 33-yeard-old Jamie Vardy and the eternal Sergio Aguero – are both older than Aubameyang – with the Arsenal striker 3rd on the list.

Over in Italy, Ciro Immobile tops the list – he turns 30 at the end of this month. Cristiano Ronaldo at 35 is 2nd, with Romelu Lukaku 3rd. At 26-years old he is one of the youngest on the long list.

Germany bucks the trend; with 2 of the 3 top scorers being under 30 – although 31-year-old Robert Lewandowski still tops the charts. He is backed up by Timo Werner (23) and Jadon Sancho (19).

If Arsenal do decide to let Aubameyang (and Alexandre Lacazette) leave this summer, they have to be looking at bringing in a proven goal scorer. Not take a risk on someone from Portugal, Holland or France. The above list would be the starting point.

You would want the Aubameyang replacement to be no older than 27 years-old. That way Arsenal get least at 3 seasons out of him before we are in the same situation as we are now.

Mo Salah, Sadio Mane, Harry Kane, Raheem Sterling, Marcus Rashford and Tammy Abraham are all playing for Premier League rivals. We can draw a line through them.

You can also remove Jadon Sancho as he is not a striker – I would not be upset to see him on our left wing next season.

Joao Pedro and Danny Ings are in the same sort of boat as each other. Having a good season, but are either Arsenal quality? No.

Romelu Lukaku only joined Inter Milan in the summer so he is unlikely to leave.

Werner is the stand out name on the list. Just 23-years-old, he already has 100 senior goals. He has been linked to Chelsea and Liverpool already. If he comes on the market, any top side after a striker will be after him.

If Arsenal do decide to cash in on Aubameyang and Lacazette, Werner must be top of the list. But I imagine Chelsea and Manchester United are thinking the same for next summer.

As for Martinez, I know nothing about him.

The reality is there is not a lot of quality proven goal scorers in world football that have youth on their side.

One option would be to look outside the top 4 leagues, and instead focus on Holland, France and Portugal:

The obvious one of Kylian Mbappe aside, there is also not much outside of the top 4 leagues.

Would you rather Aubameyang up top or Cyriel Dessers, Habib Diallo or Victor Osiemhan?

Moussa Dembele is the next best after Mbappe, but is he really up to Aubameyang’s level yet? Surely a better option would be to keep Aubameyang and sign Dembele as a replacement for Lacazette.

Likewise Myron Boadu is clearly a talent, but like with Gabriel Martinelli he is young and it will be a risk to have him as first choice.

I would rather keep a 31-year-old Aubameyang, backed up by Martinelli, than spend big on someone who is not really good enough.

Football is changing. Goal scoring is no longer a young mans game.