It is 2 weeks until Arsenal’s next game due to the ridiculous decision to have a winter break (in February).

International breaks are bad enough, but at least there is a bit of football during them. This is 2 weeks of no football for no reason. Not because of the weather, not because of religious reasons. Some weirdo just thinks it will increase England’s chances of being successful (it won’t).

Arsenal are off to Dubai for some warm weather training. A 4 day break. I imagine the trip will be very different to those that Ray Parlour and Paul Merson have written about in their autobiographies.

Not really sure the benefit of a warm weather training camp.

Surely in this day and age of marginal gains, you would want players training in similar conditions that they are playing under? Bit like Mikel Arteta instructed ground staff not to water or cut the grass ahead of the Burnley match.

I imagine the 3 night trip is more about getting the players together, away from the distractions of life, rather than needing warm weather to train in.

There is a lot to ponder for Arteta during the break. Most importantly will be the future of Mesut Ozil. 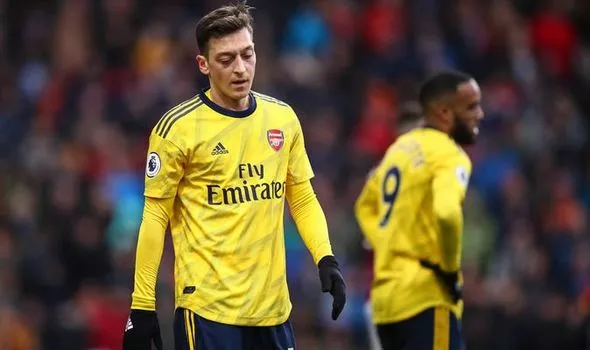 The much maligned German has not really kicked on since his handful of OK performances in Arteta’s first few games, and he has returned to his anonymous best.

Arsenal reportedly rejected a deal from the Middle East during the January transfer window due to not having the time to get a replacement in. Following another poor performance, this time against Burnley, the club might decide to let him stay in Dubai for the rest of the season before moving him on in the summer.

This is not an agenda against Ozil. It is just stating the facts that he is not producing enough.

Ozil is not the only man at Arsenal under pressure going into the winter break.

Alexandre Lacazette has not scored for Arsenal since the game against Standard Liege in the Europa League. That was back on 12th December. His last league goal came a week before against Brighton.

Last years Arsenal Player of the Year is clearly a man lacking confidence – highlighted by his inability to get a simple header on target against Burnley.

He is preferred to Pierre-Emerick Aubameyang upfront due to his ability to play with his back to goal and his hold up play. But the truth is he is no Olivier Giroud when it comes to being the pivot; allowing others around him to benefit from his lay-offs.

Arteta seems to be trying to get him to be playing in a similar way to what Jurgen Klopp has done with Robert Firmino – coming deep and being more of a creator than a goal threat.

Firmino is great in the “false 9” position and many of Liverpool’s goals comes through him dropping deep and creating space for others. Only Kevin de Bruyne and Trent alexander-Arnold have more assists in the league this season than the Brazilian.

Meanwhile Lacazette is 61st on the list with just 2 assists.

Goals is something we have struggled for under both Unai Emery and Mikel Arteta.

With not too many options at the club, both will likely continue in the side – although Arteta must be tempted to play Aubameyang or Gabriel Martineli down the middle. There is also an option of playing Dani Ceballos over Ozil; or going with a more defensive midfield of Matteo Guendouzi, Lucas Torreira and Granit Xhaka.

The later midfield would completely free up the front 3 from any defensive duties, and give the full backs more cover when bursting forward.