Here we go again, the start of yet another campaign in Europe, a journey that began for us way back in 1964 with an away win against the Danish side Staevnet in an early incarnation of this competition, The Inter-Cities Fairs Cup. As our older supporters remember, we were destined to be victorious in this contest in 1970, when the tournament was renamed and remodelled as simply The Fairs Cup, which of course, was our first European trophy; who can possibly forget that wonderful April night at the Old Place?

Tonight’s visitors hail from the Ukraine and are at the time of writing, sitting fourth in a twelve club Ukrainian Premier League, a competition which they have never won, although they have succeeded in the Ukrainian Cup nine years ago with a 1-0 victory over Shakhtar Donetsk. They have started brightly this season, winning four out of six matches, and are well on the way to at least equalling their final league position of third in the 2017-18 season, if  not higher, should faith and fortune be on their side when the competition ends next June. Mr. Emery’s choice of team tonight is both a refreshing and interesting one; amongst the eight changes on the field comes Bernd Leno, Stephan Lichtsteiner, Rob Holding and returning tonight from injury, Alex Iwobi. On the bench is a collection of usual first-teamers, Mesut Özil, Alexandre Lacazette and Mattéo Guendouzi amongst others. It should be an illuminating evening of football. 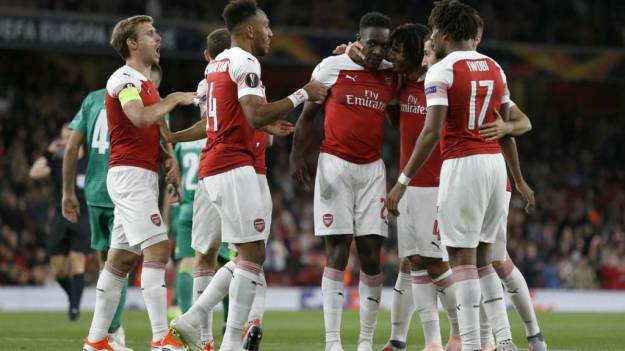 The usual slow start-up with typical sparring between the two sides is something that we have become used to, so tonight came as no surprise. Arsenal slowly dominated the game, with several chances becoming available for various players at different points; ironically it was Stephan Lichtsteiner who had the best opportinity of the early stages with an unlucky attempt which was deemed to be offside. Clearly, as the first half wore on, it was plainly obvious that FC Vorskla Poltava came to the Emirates simply to hold up proceedings, which they did constantly. However, such negative play leads to mistakes, and ultimately a price was paid. Just after the half-hour mark, the chaps counter-attacked in a classic smash-and-grab movement, and the ball found Alex Iwobi wide out on the left. With the opposing defenders closing in, he passed the ball across the 18-yard box for Pierre-Emerick Aubameyang to score comfortably. From then on until the break, Arsenal pressed and pushed the opposition and in doing so, more chances came, the best of them courtesy of Pierre-Emerick Aubameyang who hit the base of the post a minute or so before the break. The second half started as the first finished, with Arsenal’s domination; Danny Welbeck’s header which found the back of the net, within three minutes of the kick-off, followed by a superb Pierre-Emerick Aubameyang strick ten minutes later, his second goal of the match. After a flurry of substitutions, Mesut Özil scored the final Arsenal goal on 74 minutes. FC Vorskla Poltava scored two late goals, but it really made no difference; Arsenal ran out worthy 4-2 winners on the night, and despite one or two scares, overall were the better, more professional side.

The two goals that we conceded were worrying, particularly the second one – we appeared to switch off and allowed their player to take a shot, which we cannot afford to do as this competition rolls on; if we do, we will be punished heavily for our lackadaisical attitude. There were good points, however; it was great to see 18-year-old Emile Smith-Rowe make an impressive début in midfield, also Lucas Torreira played like the playmaker we know that he can be, with pinpoint passing and tracking back to help the defence; although Bernd Leno didn’t have a great deal to do, he looked confident and able to play the type of game that Mr. Emery requires of his players with regards to the distribution of the ball quickly from the back, and be comfortable in doing so. Anyway, Everton await for us next on Sunday afternoon, and that match will tell us more about this Arsenal squad than this one-sided game tonight. Remember everyone, keep the faith, get behind the team and the manager, as these early days are going to be crucial for our future success in all competitions. Stick with the winners.

Only 17 left of the wireless chargers…thank you everyone, they will be posted 1st class today..https://t.co/UU8goaMVBO pic.twitter.com/guKBJG8fPd