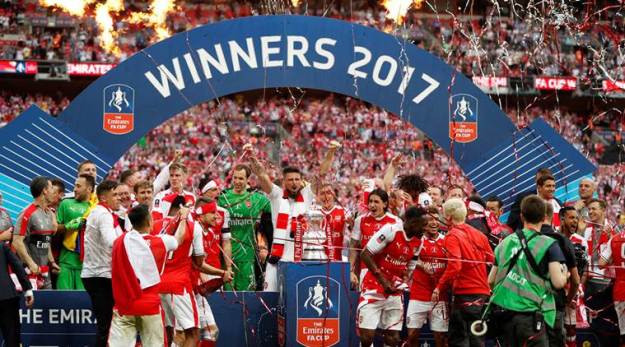 The defeat against Southampton have re-calibrated some fans expectations.

Personally I always thought this season, our minimum expectation would be to see us challenge for top 4 once more. A good season would be finishing 3rd (I expected Manchester City to run away with it, and Liverpool to finish adrift of them, but well ahead of 3rd). An average season would be 5th, just a handful of points behind 4th.

Despite losing to Southampton, my expectations have not changed. We are just 3 points of Chelsea in 4th, and 5 points behind Tottenham in 3rd.

Over at McBookie, you can get odds of 13/8 for Arsenal to finish top 4. These seem extremely long considering that there is just 3 points between us in 5th and Chelsea in 4th.

I would not sacrifice the League Cup this week for the weekend game against Burnley.

Firstly it is against Spurs. At no point is losing to Tottenham an “acceptable sacrifice”.

We need to take the game seriously and start off the next 22 game unbeaten run.

I would always take a trophy above finishing top 4.

And then we have the FA Cup. We face either Blackpool or Solihull Moors. It is another competition we must take seriously.

In 2019 we have the Europa League. By the time you read this we would know who we have in both the 2nd round and whatever round is after (is it last 64 or 32?)

The Europa League is perhaps an easier route to the Champions League than finishing top 4.

We were unlucky last year (or masters of our own downfall). We faced Atletico Madrid and it was woeful finishing and a defensive error that cost us the game, the trophy, a place in the Champions League and ultimately Arsene Wenger his job.

The Europa League is the competition we should take so seriously.

Fans argue over “trophy or top 4”. Well winning the Europa League gets you a trophy and that place in the Champions League.

In Unai Emery we have the right man for the Europa League. No one has won the competition more, and he has lifted the trophy on 3 of the last 5 occasions.

We have to be realistic in the league. It is going to take us time to sort out the mess Arsene Wenger left the squad in. Half a dozen transfer windows and £350million at least. Manchester City have the spending power and the Scousers are 3 years ahead of his.

Liverpool are running a similar self-sufficient model as we are.

In 3 or 4 seasons time, Emery would have built a title challenging squad. In the meantime we need to keep growing and, unlike Liverpool, win a few trophies on the return to greatness.

Losing to Southampton changes nothing. It does not shift what our targets are. It just adjusts some fans expectations.

Back Emery, back the management team, back the Arsenal.

2 thoughts on “Arsenal to switch focus to the cups”