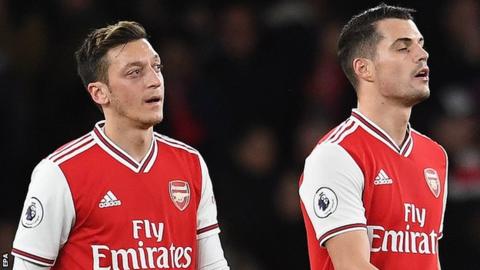 Football history is being made this week, in the guise of a new football carrier, namely Amazon Prime Video, which is why we have the crazy kick-off time of 8.15pm on a Thursday night; is this yet another glimpse of the future? We’ll see. However, we have far more important fish to fry here at The Emirates; it is important beyond mere words to win this match against Brighton and Hove Albion, as we desperately need to pull ourselves together and start winning, as the alternative is far too dark to consider.

Well, it all started off fairly competitive enough, as it always seems to do with this version of Arsenal, irrespective of opponents; but soon enough, the usual frailties came to the fore. Despite both Alexandre Lacazette and David Luiz coming reasonably close to opening the scoring with their efforts, it was the visitors that impressed with their accurate passing, thus pressing our midfielders into submission. Brighton were so efficient in their work here at The Emirates, that it would be fairly accurate to say that we had trouble actually getting out of our own half for large periods of the first forty-five minutes. Bernd Leno, as we have seen in recent matches, is undoubtedly becoming the saviour of us all; but even he, with all his magnificent acrobatic saves, found himself picking the ball out of his own net after Adam Webster put the visitors ahead after some kind of ridiculous muddle in the Arsenal penalty area with nine minutes left on the clock before the end of the first half. After conceding such a ridiculous goal, we were simply playing catch up in various areas of the pitch, with almost no pockets of resistance becoming visible at all.

However, at last, at the beginning of the second half, Nicolas Pépé was brought on to replace the ineffective Joe Willock, and the stadium became excited as to see exactly what our record signing could do. For the next ten minutes, we did actually look quite impressive, which led to Alexandre Lacazette equalising the scores with a header from a Mesut Özil corner; but within a short while, we reverted to type, sadly. Despite both Kieran Tierney and Gabriel Martinelli being introduced to the play by Freddie Ljungberg (at the expense of both Sead Kolašinac and Alexandre Lacazette) we still managed to look ordinary. David Luiz did score after sixty-three minutes, but it was cancelled out by a VAR decision; it made no impact after all anyway, as Neil Maupay scored the winner with ten minutes left of the match with a glancing header from an Aaron Mooy cross. Although the play in the last few minutes was seen out in the Brighton half, it was basically, too little, too late again.

And so, Black December continues. This is now relegation form, pure and simple as that. No responsibility on the pitch, no responsibility from the Board of Directors, and in the middle of it all, a stranded Arsenal legend who is desperately trying to stitch together a winning side from this desperate group of players, who quite frankly, are just not good enough to wear the Arsenal shirt. This squad of players has literally just fallen to pieces in front of our very eyes, and are an embarrassment to everyone associated with the club. We hear rumours of who the new manager may well be, but realistically, just who would want to try and sort this mess out? We are in complete freefall, and unless a manager with backbone and purpose is appointed soon, then I fear for the immediate future of Arsenal Football Club.

Remember everyone, keep the faith. Our next match: West Ham United at London Stadium on Monday, 9th December at 8.00pm (Premier League). Be there, if you can. Victoria Concordia Crescit.