Arsenal’s Europa League journey continues tonight with the tricky away trip to Napoli. The Gunners go into the 2nd leg tie with a 2-0 lead following victory in London last week.

Whilst they are taking a fairly comfortable lead to Naples, it is by no means a tie-winning one.

Napoli have a tremendous home record this year – 2nd in Serie A. Their only defeat this season at the Stadio San Paolo was a 2-1 defeat to table toppers Juventus.

Earlier this season they beat Liverpool at home in the Champions League.

Napoli’s ground will be a fortress of hate, and you couple their good home form with Arsenal’s poor away and it is going to be a rollercoaster of a tie. 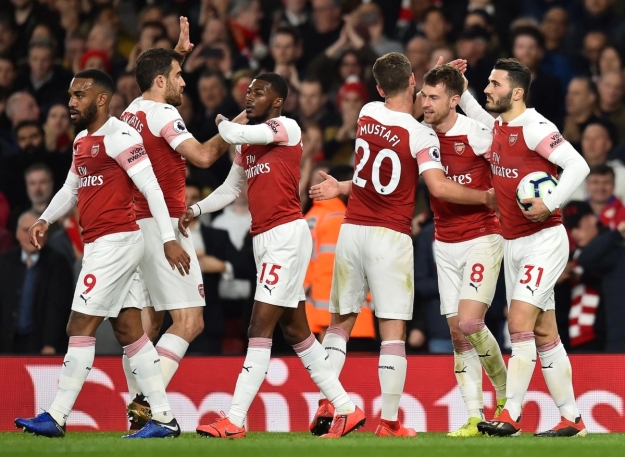 Victory against Watford on Monday was Arsenal’s 3rd away win since December 1st. The other two coming in the FA Cup against Blackpool and against bottom of the table Huddersfield Town in the Premier League. It is certainly not the form that would have you feeling comfortable travelling to Italy today.

The game against Watford showed just how psychologically damaged Arsenal are away from home.

Despite being a goal up and facing 10-men from the 11th minute, Arsenal laboured to the win. Vulnerable at the back and lacking creativity up top, Watford had their chances.

At least Arsenal did come away from Vicarage Road with the 3 points which pushed Arsenal into 4th and ensured they have two routes to Champions League football next season.

Last season Arsenal won just 4 games away in the league. This season it is 6. 10 away wins out of 35 is worrying form.

Worryingly, Arsenal have also lost both knock-out away legs in the Europa League this season – away to BATE Borisov and Rennes.

The positivity from Arsenal’s point of view is the clean sheet that they bring from London. This gives the side a huge advantage and would mean that if they do get the away goal; Napoli would need to score 4 to go through.

Arsenal’s last away match in Italy was at the Last 16 stage of last season’s Europa League, winning 2-0 against AC Milan. They have also progressed in Europe 16 out of 17 times they have led by two or more goals.

Napoli have not overturned a first leg deficit in Europe since 1989 – a run of 8 consecutive ties, whilst Unai Emery has one more Europa League knockout stage matches than any other manager – 25.

Whilst all the historical statistics point to Arsenal progressing, there is that away form.

The first goal tonight will be key.

Arsenal get it and the tie is dead. Napoli surely will not score 4. If Napoli get it, and get it early, it is “game-on”.

All those going out there, stay safe and look after each other
Hopefully by tomorrow morning we are all booking package holidays to Benidorm for the semi-final.

Back to The Emirates, and of course, back to winning ways, which is de rigueur for our home matches this season. How different tonight’s match in both attitude and aptitude from the horrendous car crash that befell the team at Goodson Park just 96 hours hence (or thereabouts). Tonight’s match was a tale of two midfielders, the departing Aaron Ramsey and the remaining Lucas Torreira, both of whom completely oozed class and dominace here in North London this evening.

Aaron Ramsey’s opening goal was surely nothing short of sublime, and coming as it did, on quarter of an hour after the start, showed Arsenal’s intent. As we have seen before with the Welsh Wizard this season, the move he started became the goal he finished. A nifty pass to Mesut Özil, who then gently pushed the ball on to Alexandre Lacazette which travelled quickly to Ainsley Maitland-Niles; the man who started the move then received it and in the blink of an eye it was in the back of the Napoli net. Just like that. Confidence in a football team is always 90 per cent of the proceedings, and for the next ten minutes or so, Arsenal showed their class. Ten minutes after taking the lead, Lucas Torreira received the ball on the edge of the Napoli area, and merely took a chance with a quick shot that caught the unfortunate Napoli defender Kalidou Koulibaly on its way to wickedly going high and over goalkeeper Alex Meret and into the net to make it two-nil to Arsenal. The remaining twenty minutes of the first half became a running battle between our strikers and the Napoli defenders as to who was to gain the upper hand. By rights, it should have been us, with both Alexandre Lacazette and Pierre-Emerick Aubameyang getting mighty close with some superb shots, provided by our midfielders, who were doing sterling work in providing them with the necessary tools to finish the job. Despite all this and more, we went into the break two goals to the good and a promise of an even better second half.

Undoubtedly the happier of the two managers, Mr. Emery kept his nerve and the team as it was before in a never-ending search for that elusive third goal. The Napoli manager, our old friend Mr. Ancelotti had other ideas and put pressure on our defence which managed to hold firm throughout, even with the heart stopping moment when Napoli did manage to finally get the ball past Petr Čech and into the net, only for the match officials to correctly rule it out for offside. Phew. The match levelled out, and Mr. Emery made three substitutions in ten minutes; Henrikh Mkhitaryan, Alex Iwobi and Mohamed Elneny for Mesut Özil, Alexandre Lacazette and Lucas Torreira. Off we went again. Despite some wonderful football emanating from the football brain of Aaron Ramsey, we just could not get that killer third goal to take to Naples next week. Still, a good win, and one that we can hopefully build on next Thursday.

What price Aaron Ramsey, we ask ourselves? He seems to be on the way to becoming more of a complete midfielder as he gets closer to the exit signs to start his new career at Juventus. With performances such as this tonight, we are starting to question the wisdom of allowing him to leave North London. We are now all surely praying that this clever footballer doesn’t come back to haunt us one day; but the world of professional football works in mysterious ways, as well we know. Still no Denis Suárez, who is becoming almost Garbo-like in his non-appearance on the pitch, sadly. It would have been good to see Mattéo Guendouzi stretch his legs for a while at some point in the match, but as the game was going our way early on in the proceedings, his skills were not required tonight. And so, it’s Naples for the chaps next week, and we are all hoping that we can see the job through well enough to get to the semi-final draw. Remember everyone, keep the faith, get behind the team and the manager, as these early days are going to be crucial for our future success in all competitions. Stick with the winners. Victoria Concordia Crescit.

Tonight is the tough Europa League tie against Napoli.

The two sides faced each other in the Champions League back in 2013/14. Arsenal won the home game 2-0, Napoli the away game by the same scoreline.

Napoli are much improved since then and are comfortably the second best team in Italy behind Juventus.

Keeping a clean sheet will be just as important for Arsenal as scoring a goal tonight. A 0-0 is just a good a result as a 2-1 win with away goals still relevant in the Europa League (although no longer relevant in the Champions League).

Napoli have never beaten an English side away from home in Europe. There record reads P8 W0 D1 L7.

It will be a tough game tonight.

Arsenal target Christopher Nkunku has reportedly turned down a new contract with PSG.

The French youngster’s current deal runs out in 2020, opening the door for Arsenal to secure their man this summer for a reduced fee.

Back in January Arsenal were heavily linked with Nkunku for around £15million. Talk this morning is that it could take up to £30million to bring the versatile midfielder to London. This is vastly exaggerated taking into account his contract situation.

With Aaron Ramsey leaving in the summer, Arsenal are on the look out for someone who can replace his versatility and high energy game.

In January the club took Denis Suarez on loan from Barcelona with an option to buy him for £17.3 million at the end of the season. The Spaniard has struggled to break through at Arsenal and reports are the club have gone cold on moving for him in the summer.

This would leave Nkunku was the number one target to replace Aaron Ramsey at Arsenal – as long as the price is right.

The 21-year-old Frenchman will add something different to Ramsey going forward.

He is not quite as technical as Ramsey, but he is better at driving forward with the ball. He will certainly offer a different option if we are unable to pass our way through a team.

This season he has played central midfield, behind the striker, on the wings and at right back for PSG. Being on the bench, he would offer Emery plenty of different options depending on the game situation.

This is one deal I expect us to get over the line this summer.

Speculation was rife as to the reason for his departure.

Some said it was due to a falling out between himself and Raul Sanllehi, others said he felt marginalised due to Unai Emery’s growing influence. Some pointed to disagreements between himself and his scouts, whilst others talked about his frustration about transfer targets being over looked. Ultimately it was the most logical reason that was true.

Mislintat applied for Arsenal’s Technical Director role and was quickly rejected. Mislintat was unhappy, felt he was ready to step up to a more senior role, and resigned.

It happens all over the country in all industries.

An employee applies for an internal vacancy which will be a promotion, gets rejected, so looks for similar roles elsewhere.

The reason for the rejection was Mislintat lacked experience as a Technical Director – he had spent his entire career involved in scouting. It would have been a risk for a club the size of Arsenal to appoint someone who had no experience in such a big role.

Arsenal wanted someone who had done the job before, hence the approach for Spanish technical director Monchi.

Again you see this up and down the country in all industries.

Big companies often poach CEO’s, Managing Director’s or other high ranking staff from other companies rather than promote from within, unless the person within is only making a small promotion step.

Due to lack of experience, when Mislintat went out to the market, he probably found himself rejected by a lot of big clubs. The likes of Manchester United – also looking for a footballing director – were not interested. So he had to lower the standard of club he was targeting.

This had led him to take up the role of Sporting Director at VfB Stuggart.

Stuttgart are currently in the Bundesliga relegation zone, which highlights just how low Mislintat has had to look to get the position he wants.