2006-07
Ok, so we have had 1 season of no trophies, 1 season with an empty trophy cabinet, I think we were all ok with that. We were moving to a new ground and knew that things were going to be tough for a spell. Transfers would be difficult and sales would be more high profile than purchases. We wanted to compete still and were told that the move to the stadium would help us to allow this, maybe not straight away but it would come again.
Transfer wise we had swapped Cashley for Gallas and £5million, Alex Song came in, Tom Rosicky joined from Dortmund and Julio Baptista came in on loan from Madrid which saw Jose Reyes go the other way. We lost some important players in the summer with Bergkamp retiring, Pires leaving for Spain (Should never have been allowed) and Sol Campbell left for Portsmouth when we all thought he was going abroad. 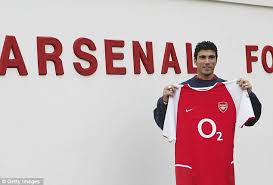 The first competitive game in our new stadium, Emirates, was against Villa where we could only manage a draw after going 0-1 down, Arsenals first ever competitive goalscorere in the Emirates Stadium? Anyone? Answer was Gilberto Silva. Villa`s goal came from Olof Mellberg who will forever be the first ever competitive goalscorer in our ground.
We qualified for the Champions League by beating Dinamo Zagreb home and away, our group for the competition was Porto, Hamburg and CSKA Moscow.
We started the season well enough, we again lost our second game of the season as we did in 2005-06, this time it was away to Man City. We had 5 wins in our first 10 games losing only twice to City and West Ham, one of the wins came against United at Old Trafford with a late Adebayor goal.
November was a horrible month, out of 5 games we lost 3 times against West Ham, Bolton and Fulham all away from home, the 1 game we won was against Liverpool at home and we drew at home to Newcastle.
3 defeats in a row, just like last season pretty much confirmed we would not be anywhere near the title, away at Everton, away at Liverpool and home to West Ham all coming in March. We had also slipped up at Sheffield United over the Xmas period.

Scanning through the results I can see we drastically improved our results against the big teams, only losing once to Liverpool away. We beat United home and away and drew against Chelsea home and away, we beat Liverpool at home to give our record against the other top 4 teams a much needed boost. The problems are again the same as the season before, consistency, beating the small teams. West Ham did the double over us!,we also lost to Sheffield United, Bolton and Fulham which is not the sign of the title winners. We were comfortably 4th and tied on points with 3rd place Liverpool. We were not making any progress in being able to challenge for the league but were having small improvements, for example against the top 4.

We went out of the Champions League in the first knockout round to PSV after an 83rd minute header from Alex put us 1-2 down on aggregate. We managed to top our group and still went out in the qualifying round! Who would have thought that could happen, especially with so many opinons flying around about finishing 1st or 2nd in the group stage lately!

We went out in the FA Cup in the 5th round to Blackburn in a reply after we could only draw 0-0 with them at home in the first game. In the 3rd round we played Liverpool away, the game where Rosicky scored 2, one of them being an absolute peach! Im sure you remember it.

The Carling Cup was the year we got to the final and played Chelsea. We had managed to put out Liverpool where Baptista scored 4 at Anfield, WBA, Everton and Spurs in the semi final.
The final I went to and Theo scored one of my favourite ever Arsenal goals. We were not fancied as winners at all, we started a team of youngsters and reserves amongst a couple of first teamers. We managed to go 1-0 up but that man Drogba scored twice meaning we lost another final we had reached. Im sure you remember it all kicked off as well with both managers having to go onto the pitch to calm things down, Kolo and Adebayor were sent off in the late stages. Diaby did kick John Terry in the head though and knocked him out cold, every cloud and that! 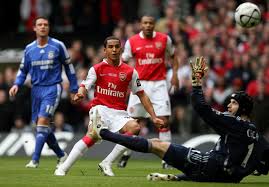 In summary we had reached another final giving ourselves another chance to win a trophy. We were not close to finishing top of the league but results had improved and consistency was the missing ingredient. We went out of the Champions League too early I think, and didn’t do anything of note in the FA Cup. Being up against Chelsea in the final made it difficult to win the Carling Cup but we have to take that as being in with a chance of winning another trophy.

2 seasons with no trophy and counting!

My Tweets
Join 98,930 other followers