In writing the reviews for the 8 baron seasons we have endured I wondered if I would have to write another one this summer improving the number to 9, again reviewing why we didn’t manage to win something. Half way through the season I really did believe that I would have to as we started slipping away in the league and drew Bayern once again in the Champions League. Luckily the FA Cup was our saviour and I’ve now been privileged to see us win it 4 times, something not many fans of any club will ever see.

I don’t want to make this review to long and complicated as we all know what happened in the season that just passed. Key moments and games are the things I’ll be targeting and obviously the FA Cup run which has helped us to have a happy summer before it all starts again in August.

We visited the Far East for a pre-season tour finishing up with the Emirates Cup which we didn’t win…..again. Transfer wise saw us have a bit more of a clear out of the youths with 10 not having their contracts renewed. We sold Mannone, Gervinho and Santos, Meade and Squillaci all signed for new clubs on free transfers. We had a bit of a surprise on players coming in with us finally seeing a big transfer fee spent on bringing Mesut Ozil to us from Madrid. Finally a big name player joined us for big money although a lot of fans commented on the fact that Ozil’s position wasn’t desperate for recruits like our striker position was. We flirted with Suarez and Higuain all summer with a deal for Higuain apparently being agreed, Madrid then raised their price and we switched attention to Luis Suarez and a clause in his contract. Liverpool refused to honour the clause and demanded he stay which in the end he did. We also brought back Flamini on a free, probably the signing of the summer and youngster Sanogo came in from Auxerre. 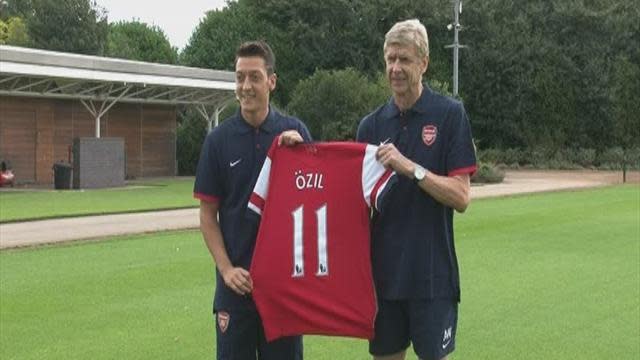 Ozil lifted everyone’s spirits especially as we had already had a disastrous start to our season with an opening day defeat to Villa which brought out more anger and bile to the Emirates than I think I’ve ever seen. Thankfully it seemed to be a very minor blip because we then went on a fantastic run seeing us shoot to the top of the table where we stayed until early February. In that run we failed pick up enough points from any of the top sides we played which ultimately meant we would not keep our league title challenge going until May.

We did beat Tottenham, but then so did a lot of teams, we beat Liverpool at home too but couldn’t beat United away in their worst season since the Premier League began which was extremely disappointing. We then went and lost away at City and could only draw against Chelsea at home after Mourinho parked the bus in one of the most boring performances from a visiting side to Arsenal I think I’ve ever seen.
Despite this we stayed top and had a good Xmas period with a win at Upton Park then up at Newcastle and then at home against Cardiff. We let 2 points slip at Southampton with a very bad performance. I went up to the Emirates to watch the game in Club Level and it proved to me that we were still capable of putting in a bad shift. Champions are able to win ugly and pick up wins when they don’t play well, this game proved to me that we were unable to do that consistently.

Not long after that result saw us go to Anfield where our season fell apart. We were ripped to shreds with the new exciting style of football that seems to be working across Europe and we were 0-4 down within 20 minutes. It was a disgusting performance and we were due to see this type of performance again unfortunately at Stamford Bridge where we lost 0-6. We couldn’t beat Stoke away either and by 22nd March we were back down to 4th which is where we stayed and finished. Everton beat us well at Goodison which was another disappointment, especially as they were pushing for our 4th place spot, it was a huge game and we rolled over without so much as a whimper.
We will never know what would have been had we signed a striker in January, I can only assume nothing was available which would have helped us as surely Wenger would have done it?

The league disappointment was frustrating for all fans to watch but thankfully we had a good cup run which kept our hopes of silverware alive.
We didn’t have an easy run of games in the FA Cup which we never seem to! Starting off in the 3rd round against Spurs tells you it’s going to be a difficult run. Coventry, Liverpool and Everton were the next run of games and thankfully they were all at home. The Semi Final saw us go the distance against Wigan at Wembley where we won on penalties to take us back to a FA Cup final for the first time since 2005.

We beat Hull in extra time to spark a weekend of wild celebrations and happiness. The parade on Sunday 18th saw a reported 250,000 people line the streets to see the players and the trophy which has ended our wait for silverware.

I believe all of our hopes are now to have a good summer, to sign players we need to sign and start well next season. This season has showed us we are not that far away, we lost key players for chunks of the season whereas had we had good solid replacements to come in we may have been able to carry on challenging. As I write this I’m having conversations on twitter with fans about whom we should sign and where we need players. The big rumour is for Cesc to return so I thought I’d offer my opinion on that before I sign off.
Cesc Fabregas is a world class quality player, that is undeniable, however, for me we need players in other positions before we go for Cesc and I’d spend our transfer budget on others. Midfielders at our club currently are Jack, Ozil, Ramsey, Arteta, Flamini, Cazorla and Rosicky, do we need another one? Go and get a striker Arsene, for me.

Have a cracking summer, Im off to Finsbury Park tomorrow for the Arctic Monkeys and also taking in V Festival which should satisfy my music appetite for a while.
See you in August, thanks for reading.

2 thoughts on “And in the 9th Season we finally won!”