I have been a Gooner for 25 years.

My dad wasn’t a big football fan and didn’t really have a team, so one wasn’t passed down to me. After moving a few times because of my dads work, our family settled in the delightful county of Essex. I went to a private school in Old Harlow and sitting next to me was David Seaman’s son, Daniel.

We became friends and it was the talk of the school that an Arsenal and England footballers kid went to that school and I sat next him every day. Daniel invited me to a birthday party at his house, naturally it was a football party and I wanted to wear an Arsenal shirt. So my parents bought me one. I have been a die hard Gooner ever since

Just for the record at the party we had a penalty shootout. David was in goal… I gave him the eyes, he went left, I went right and the rest is history. Some say he let me score, others (me) say he didn’t.

My dad and I fell in love with the club and going to games. I was a Junior Gunner from then on and was a season ticket holder for 11 years. In 2008 I moved to New York where I discovered there are something called, supporters clubs. Going to Highbury and the Emirates every week you don’t really think about the millions of fans around the world that can’t be there. I was blown away by the amount of supporters that showed up to the pub for every game. They knew every song and it was like being in the Tollington to watch games.

In 2011 I got married and moved to my wife’s home city of Miami, FL (horrible I know). I looked for a supporters club like the one in New York but there was nothing, so along with a friend in 2013 decided to start the Miami Arsenal Supporters Club (MASC). I got on paintbrush and created a logo (below) and contacted Arsenal America and became an official branch. I started on social media trying to recruit Gooner’s in Miami having no idea whether there were any.

Miami is a big football city given it’s Latin influence. So there are a lot of Real Madrid, Barcelona, Boca Juniors etc fans. The first game for the MASC was the opening game of the 2013/2014 season. Our pub was a British pub called Elwoods owned by a Chelsea fan and 35 people showed up. I was astounded. We lost 3-1 at home to Aston Villa so not a great start but MASC was off and running. 3 years later we have over 500 members and are the biggest supporters club in Miami.

We have a huge following on social media and have been featured on many media outlets including; NBC, ESPN, Bleacher Report, TalkSport Radio, Arsenal’s facebook page and even the official Arsenal website. 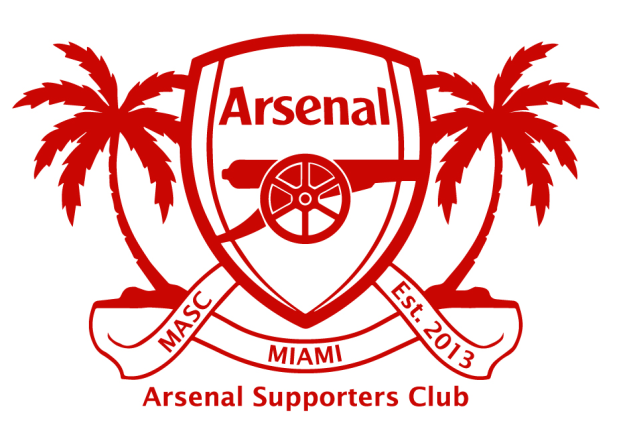 It is hard being away from the Arsenal and not being able to go to games, but this is the next best thing.
And that’s my story.
Thanks!
Chris N. Allan
Founder & President
Miami Arsenal Supporters Club