The news was as expected. Santi Cazorla has been told to undergo surgery for Achilles tendon injury.

A quick Google of recovery times shows that after surgery, someone will be able to walk unaided after 6 – 12 weeks. But will not be able to return to full activity for 6 months. Taking into account we are a football club, not a normal person going physio once a week, you could probably guestimate that Cazorla will be out for 4-6 months. Pretty much ruling him out for the season.

It is then safe to assume that Santi Cazorla’s Arsenal career is over. 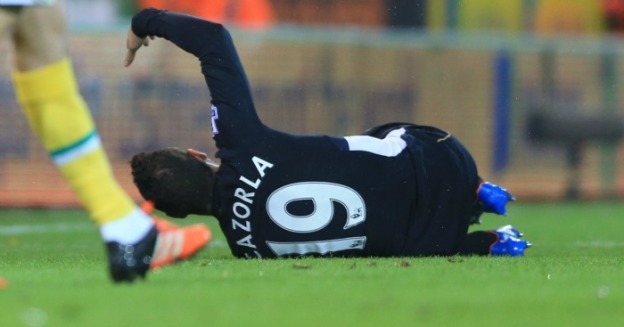 He is 32 in a few weeks and with 1 year left on his contract, Arsenal were already debating as to whether to reward him with a new contract. There had been little talk of one being on the table. Cazorla had also spoken a few times about finishing his career in Spain.

With his age and his recent injury record (2 serious injuries in 12 months) it will be a very big risk for Arsenal to offer Cazorla anything more than a one year deal. Cazorla would be crazy to accept – knowing that a Spanish club would possibly offer him more.

So the love story of Arsenal and their cheeky chappy Spanish dwarf is over.

So where does this leave Arsenal’s midfield?

We only discussed a week ago about how much Arsenal were missing Santi Cazorla. With his career at the club now almost certainly over, it is time to look at the options.

Santi Cazorla is unique. His two footedness is only equalled by Ronnie O’Sullivan’s ambidextrous snooker playing.

He might be small, and not be physically capable for a heated midfield battle, but he always gave his all, and his control, dribbling and passing ability got him out of trouble when up against bigger men.

He was able to wriggle out of tight situations where he should really be getting overpowered with ease. A drop of the should, a quick pass off both feet. And it is the way he opened up both sides of the pitch that made him such a danger.

The fact is, there is no one in world football who is as gifted off both feet as Santi Cazorla. So a like for like replacement is unlikely.

You might see the likes of Isco get mentioned as a replacement, yet he is more lightweight and does not have Santi’s gifts.

Nice midfielder Vincent Koziello has had some comparisons to Cazorla. But this is more due to his size than his ability. Cazorla is far superior.

The only man who gets close to Cazorla’s attributes is Dimitri Payet. But he does not have the attitude of Cazorla. He would not be able to adapt to playing deeper.

If we can not get in a like for like replacement, we will have to look at getting the midfield pairing right. The strength of two being great than one (and the power of three setting us free).

Discounting Cazorla, Arsenal currently have 5 central midfielder’s on their books to chose from going forward (including 1 on loan). How would they match up, and how could they partner with each other?

Francis Coquelin: The legs of the midfield. He covers the ground. Arsenal’s Kante. It is he who when partnered with Cazorla, allowed Santi to stroll through a lot of games. He was Cazorla’s legs. Getting round the park, winning the ball, and laying it off to the Spaniard. It is unlikely that we will get in a player as gifted on the ball as Santi, so Coquelin’s lack of ability on the ball could see him drop down the pecking order.

Granit Xhaka: Once he gets up to speed (I am still baffled as to why Xhaka is not yet playing regulary), Xhaka will be a terrific ball playing holding midfielder. Very much in the Xabi Alonso / Michael Carrick role, he has a terrific passing range, but also has very good defensive awareness and a bit in the tackle. He is a bit more defensive than Cazorla, not as good in tight situations, and it just one footed. But his passing ability will be essential when it comes to replacing Cazorla.

Mohamed Elneny: Kind of a mix of Coquelin and Xhaka. He doesn’t cover as much defensively as Coquelin, but can get round the park more than Xhaka. He is a better passer than the Frenchman, but no where near as good as Granit. He has been exposed in a couple of recent games for not giving the defence enough cover, and not quite having enough creativity. He has a place in the Arsenal squad, but as cover, rather than first choice.

Jack Wilshere: By now he should be Arsenal captain. Instead he is on loan at Bournemouth. Some think, like Cazorla, he will not be seen at Arsenal again. If fit and firing, he would offer very similar to what Cazorla did. The passing ability, being able to take the ball in tight situations and wriggle out of them, he should be exceptional. He just lacks Cazorla’s ambidextrous. And then we have his injuries. Last year we planned to build the midfield around him, and he got injured. Can you really pencil a player into the 1st team if he can not be relied upon? I am not sure. Also, if Granit xhaka is behind him, Mesut Ozil ahead, we have a midfield 3 of left footers. Not much balance.

Aaron Ramsey: And that leaves everyones favourite, Aaron Ramsey. Who had a shocker mid week. But his class is undeniable (even if some do try and deny it). For me, his best position is as the ‘waterboy’ of the team. Doing the hard work between someone more defensive and someone more attacking. If we are under the cosh, he has the defensive awareness to sit in alongside the defensive midfielder. If we are on top, he is free to get forward and support the front 4. He just needs to be played in his right position.

One left footed, the other right, gives us balance not seen since Patrick Vieira and Emmanuel Petit. Xhaka has the defensive awareness and ability on the ball to sit in front of the back 4 and start the play, as Petit used too. Meanwhile Ramsey has the legs to get around the field, press a bit higher, a bit like Vieira did.

With Mesut Ozil ahead, it should give us plenty of creative fluidity, and plenty of defensive cover.

We would then have the options of Jack Wilshere, Mohamed Elneny and Francis Coquelin as cover depending on the opposition / injury situation.

Losing Cazorla will be tough. A popular player who offered so much on the pitch. But we now need to move on. Let’s get the Xhaka / Ramsey axis developed.

Who do you think should play central midfield (pick 2):

2 thoughts on “Santi Cazorla’s Arsenal career over – who will replace him?”