FC Vorskla Poltava (0) 0 Arsenal (3) 3
UEFA Europa League, Group E, Matchday 5 of 6
Olimpiyskiy Stadium, Kiev, Ukraine
Thursday, 29th November 2018. Kick-off time: 5.55pm
(4-2-3-1) Čech; Lichtsteiner, Jenkinson, Holding, Maitland-Niles; Guendouzi, Elneny; Ramsey, Willock, Nketiah; Smith-Rowe
Substitutes: Mkhitaryan, Martinez, Gilmour, Medley, Osei-Tutu, John-Jules, Saka
Scorers: Smith-Rowe, Ramsey, Willock
Yellow Cards: Holding
Referee: Bartosz Frankowski (Poland)
Attendance: circa 20,000
Tonight we travel to the Ukraine for the fifth match in the six game series of Group E in the Europa League. As we recall, on the last occasion that we met in August, Arsenal ran out 4-2 winners; we hope for a similar successful result tonight. Unfortunately, due to the worsening political situation in the Ukraine, this match cannot be played at the Oleksiy Butovsky Vorskla Stadium in Poltava, so it has been transferred to the 70,000 capacity Olimpiyskiy Stadium in Kiev, (home of Dynamo Kiev) for security reasons; logically, we should not expect a full house here tonight.
Mr. Emery’s choice of players travelling to the ancient city of Kiev tonight gave away his view of the opposition and much more than that, Arsenal’s dominance in the Europa League so far. In minus 12 degree conditions (and below that at times too), it was an inspired choice not only to leave several recognised first-team players back in London, but to give reserve and academy footballers a run-out in this competition, which is so often thought of as a poor relation to the high profile Champions League.
It became fairly obvious to all and sundry that early on in the match, Arsenal were not only playing in second gear, but felt that they were not going to be put under too much pressure overall. And so it was that on the eleventh minute, young Emile Smith-Rowe capitalised on a loose ball just outside the six-yard box (after some superb work by Joe Willock) and slotted the ball home with a coolness that belied his tender years. Although the home side had one or two tepid efforts on Petr Čech’s goal, Arsenal were now in the ascendancy and their grip on the game became absolute when fifteen mimutes after taking the lead, Aaron Ramsey was brought down in the penalty area; the same player who was the recipient of the foul then nonchalantly introduced the ball to the back of the Poltava net for Arsenal’s second of the evening. After this, the rest of the first half became fairly pedestrian with the Londoners hardly breaking into a sweat throughout. However, all was not done with this half. Just four minutes before the break, after a period of quite disturbing fouls on the Arsenal players, some superb pass-and-move play (orchestrated by the excellent Mattéo Guendouzi) was finished off by Joe Willock, in a dare I say it, Thierry Henry-like (remember him?) excellent low shot to make it three-nil to the vistors at the break. 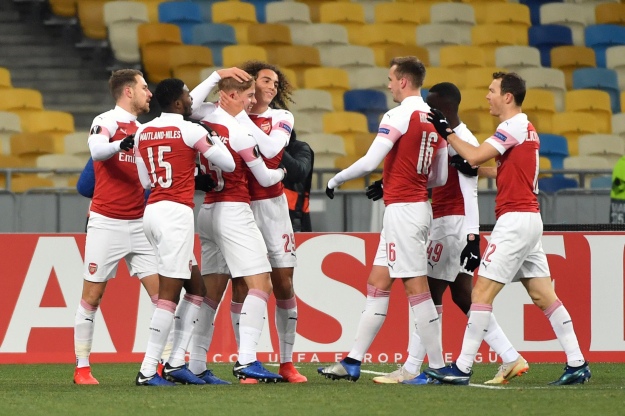 The second half saw FC Vorskla Poltava try to make a decent fist of things (they were the home side after all) with one or two fairly good attempts on the Arsenal goal, but overall, we were not threatened unduly. Sadly Emile Smith-Rowe’s goal was wrongly disallowed for offside after 67 minutes, but it really made no difference. They were comfortable, in command throughout and at no time could you really say that they were pressurised by the home side at all. At one time there were six academy teenagers playing for Arsenal on the pitch tonight, all of them did well, and they gave a great account of themselves too; our future looks bright with these young men who can only surely get better and more confident. Of the more experienced men, Carl Jenkinson looked solid tonight, as did Aaron Ramsey, who set a good example to our “Young Guns”. With only two accredited shots on the Arsenal goal, Petr Čech had little to do, but still showed to be an commanding figure between the sticks. Anyway, we have qualified as champions of Europa League Group E quite comfortably; eighteen matches without defeat across all competitions, who would have thought that of us this time last year?. Top of the group, having a laugh. Exactly that. Remember everyone, keep the faith, get behind the team and the manager, as these early days are going to be crucial for our future success in all competitions. Stick with the winners. Victoria Concordia Crescit.