After the debacle of the match at Anfield three days ago, a win today is imperative; nothing less will do. Hopefully Mr. Emery will have used the time wisely to speak to the players and stress to them that their performance in the last match is not acceptable for a club such as Arsenal – it is now obvious that the funds must be made available for the January transfer window in order to bring new blood into the club, and quickly too. Thirty days and counting.

Unfortunately Mesut Özil is missing from the squad today, due to a knee injury; it would be interesting to see how he would perform against Fulham, who at the moment look like relegation candidates, but he joins the ever-growing injury list that includes Nacho Monreal, Rob Holding, Henrikh Mkhitaryan and Danny Welbeck. By taking a quick glance at the line-up today, it is indeed rare that both Pierre-Emerick Aubameyang and Alexandre Lacazette take their respective places at the very start of the match, but desperate measures lead to a different throw of the dice somehow. We started the match quite nervously, but under the circumstnaces, it it to be understood these days. Ryan Sessegnon (for the visitors) came dangerously close to opening the scoring, but all doubts and nerves were dispelled on the 25th minute, when Granit Xhaka opened our account with a well-taken finish after some great work by Alex Iwobi, who is continually evolving into a fine professional footballer. What a difference a goal makes! Unlike the match at Anfield, we not only opened the scoring, but today we were determined to hold on to it as well. Our first half play was confident, and before the break, Granit Xhaka almost grabbed his second goal of the day, with Pierre-Emerick Aubameyang and Alexandre Lacazette also coming close to scoring as the minutes of the first half ebbed away.

Shkodran Mustafi was substituted for Lucas Torreira, and so the second half began again in earnest. Arsenal’s pressure was impressive, and as such they were rewarded with a goal ten minutes after the restart. Again, young Alex Iwobi was involved, and after some clever inter-play between Pierre-Emerick Aubameyang and Sead Kolašinac, Alexandre Lacazette moved into position and ensured that the ball found the back of the net. Amazingly, after referee Graham Scott denied a clear-cut penalty for the home side when Alexandre Lacazette was brought down inside the 18-yard box, Fulham counter-attacked and were indeed fortunate to grab one back when Aboubakar Kamara scored for the visitors. With fifteen minutes left on the clock, Alexandre Lacazette was substituted for Aaron Ramsey and within minutes had scored the third of the day after a shot from Pierre-Emerick Aubameyang had hit the post, but fortunately Aaron Ramsey capitalised on the rebound. Of course by now we were in total command, and as soon as Alex Iwobi was substituted for Bukayo Saka, Pierre-Emerick Aubameyang scored his 14th goal of the season, having collected an inch-perfect pass from Sokratis. Three points won, fifth place in the table attained, all in all a good New Year’s Day for everyone associated with the club. 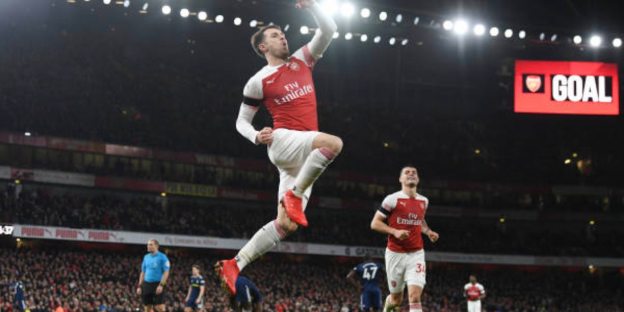 Okay, we got three points, but there were some pretty hairy moments along the way, particularly in the first half. The defence still looks wobbly and Mr. Emery desperately needs top class players to shore up the noticeable gaps at the back; since Rob Holding has been absent with his long-term injury, the defence is extremely porous indeed. Still, January is now here and let’s hope beyond hope that we can sign new players  at some point in the next thirty days. Remember everyone, keep the faith, get behind the team and the manager, as these early days are going to be crucial for our future success in all competitions. Stick with the winners. Victoria Concordia Crescit.