I hate the BBC’s Price of Football.

it does not give a fair reflection of the actual price of football, and is often used by lazy journalists to bash Arsenal for season ticket prices.

My biggest gripe is that it ignores that Arsenal fans get 26 matches for their season ticket cost, whilst every other Premier League club get just 19. That is 35% more games. It is unfair to compare them.

You would not expect Arsenal to have equal season ticket prices to Tottenham, Chelsea or Liverpool when they get 35% more games.

When you break it down per game, Arsenal cheapest season ticket is actually cheaper than those previously 2 mentioned clubs.

What is also ignored is that you can pay just £26 for tickets to Arsenal games.

A Fulham fan recently did a study on ticket prices.

A comparison between all Premier League clubs match ticket prices for cheapest to most expensive for 'behind the goal'.@Fulhamfc are 3rd behind Manchester City and Chelsea with the highest cheapest match ticket (£45). #FFC

At £26, Arsenal’s cheapest ticket behind the goal is half the price of one for Chelsea. It is something that the media would not talk about as it would not get the hits, clicks and advertising revenue.

I have always been a fan of the way Arsenal categorise games.

It suits those who are happy to go to any game just to watch The Arsenal no matter the opponent. Anyone who pays game by game for every match pays an average prices. The only fans who are “punished” are those who decide only to go to the big games – Manchester United, Tottenham, Chelsea, Liverpool, Manchester City.

I am always of the opinion that you can not really moan about Cat A prices if you do not want to go to Cat C games. Go to both and the prices average out. Go to just Cat A and it is clear you only have an interest in big games.

Of course, the argument is easily (and rightly) made that Cat A is too expensive.

I am all for reducing ticket prices. They are across the board, not only at Arsenal or in the Premier League but down through the leagues.

For example Arsenal’s £26 is just £4 more than it would cost to pay on the gate to stand behind the goal at a Colchester United game in League Two.

My personal opinion has always been that the Cat A ticket prices subsidise Cat C, the League Cup, etc. That without Cat A, you could then not have the cheap Cat C tickets. And if someone only wants to go to Cat A games; that is their problem.

Manchester United do not have category tickets. Prices are the same no matter the opponent – £36. An Arsenal fan, on average, would pay £40 a ticket behind the goal if they went to every Premier League game. A difference of just £4.

So you could (and many do) make the argument that Arsenal should scrap category pricing and just charge a stand price for all games – in this case $30 to sit behind the goal in the lower tier.

Personally I would rather keep our system, have Cat A, B & C and offer the cheapest adult tickets behind the goal in the Premier League.

After the debacle of the match at Anfield three days ago, a win today is imperative; nothing less will do. Hopefully Mr. Emery will have used the time wisely to speak to the players and stress to them that their performance in the last match is not acceptable for a club such as Arsenal – it is now obvious that the funds must be made available for the January transfer window in order to bring new blood into the club, and quickly too. Thirty days and counting.

Unfortunately Mesut Özil is missing from the squad today, due to a knee injury; it would be interesting to see how he would perform against Fulham, who at the moment look like relegation candidates, but he joins the ever-growing injury list that includes Nacho Monreal, Rob Holding, Henrikh Mkhitaryan and Danny Welbeck. By taking a quick glance at the line-up today, it is indeed rare that both Pierre-Emerick Aubameyang and Alexandre Lacazette take their respective places at the very start of the match, but desperate measures lead to a different throw of the dice somehow. We started the match quite nervously, but under the circumstnaces, it it to be understood these days. Ryan Sessegnon (for the visitors) came dangerously close to opening the scoring, but all doubts and nerves were dispelled on the 25th minute, when Granit Xhaka opened our account with a well-taken finish after some great work by Alex Iwobi, who is continually evolving into a fine professional footballer. What a difference a goal makes! Unlike the match at Anfield, we not only opened the scoring, but today we were determined to hold on to it as well. Our first half play was confident, and before the break, Granit Xhaka almost grabbed his second goal of the day, with Pierre-Emerick Aubameyang and Alexandre Lacazette also coming close to scoring as the minutes of the first half ebbed away.

Shkodran Mustafi was substituted for Lucas Torreira, and so the second half began again in earnest. Arsenal’s pressure was impressive, and as such they were rewarded with a goal ten minutes after the restart. Again, young Alex Iwobi was involved, and after some clever inter-play between Pierre-Emerick Aubameyang and Sead Kolašinac, Alexandre Lacazette moved into position and ensured that the ball found the back of the net. Amazingly, after referee Graham Scott denied a clear-cut penalty for the home side when Alexandre Lacazette was brought down inside the 18-yard box, Fulham counter-attacked and were indeed fortunate to grab one back when Aboubakar Kamara scored for the visitors. With fifteen minutes left on the clock, Alexandre Lacazette was substituted for Aaron Ramsey and within minutes had scored the third of the day after a shot from Pierre-Emerick Aubameyang had hit the post, but fortunately Aaron Ramsey capitalised on the rebound. Of course by now we were in total command, and as soon as Alex Iwobi was substituted for Bukayo Saka, Pierre-Emerick Aubameyang scored his 14th goal of the season, having collected an inch-perfect pass from Sokratis. Three points won, fifth place in the table attained, all in all a good New Year’s Day for everyone associated with the club.

Okay, we got three points, but there were some pretty hairy moments along the way, particularly in the first half. The defence still looks wobbly and Mr. Emery desperately needs top class players to shore up the noticeable gaps at the back; since Rob Holding has been absent with his long-term injury, the defence is extremely porous indeed. Still, January is now here and let’s hope beyond hope that we can sign new players  at some point in the next thirty days. Remember everyone, keep the faith, get behind the team and the manager, as these early days are going to be crucial for our future success in all competitions. Stick with the winners. Victoria Concordia Crescit.

“What an arrogant team selection” I saw someone comment just before kick off on Sunday.

No Mesut Ozil; Aaron Ramsey, Pierre-Emerick Aubameyang and Sokratis on the bench.

I can see why some were a little worried about a “weak” side prior to kick off, but it perhaps showed a lack of faith in the manager who has had a fabulous start to his Arsenal’s career.

I saw some people compare it to an Arsene Wenger-era line up. This baffled me. Wenger is gone. Support the new regime. The new team.

The reality of the starting XI was it only 3 or 4 players shy of its strongest line up (depending on if you think Ramsey is in the strongest XI).

Ozil was out with a back strain, and Aubameyang and Ramsey both also missed mid week (there has been a cold flying about). Sokratis has also been managing a slight knee injury that he picked up against Everton a couple of weeks ago.

So the XI that Emery put out was the strongest, fittest XI available. 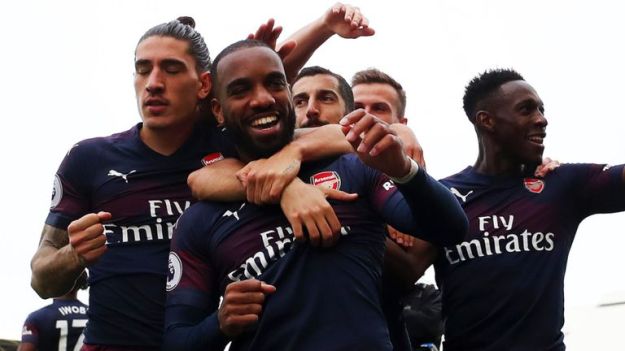 The fact that the side brushed away an albeit poor Fulham side without key players shows the confidence flowing through the side right now. And it is not just the first team that is riding high.

Arsenal's first team and academy teams have win 17 of their last 19 games between them. Looking good throughout the club.#Arsenal100 #FULARS #FULvARS pic.twitter.com/xKTmK7OMsn

Momentum is such a big thing in sport.

At the weekend Lewis Hamilton won the Japanese Grand Prix. It was his 4th win in a row. Meanwhile Sebastian Vettel finished 6th, and has failed to make the top 2 in the last 4 races. It puts the British driver in a position where he could win the title at next race at Austin.

Hamilton has all the momentum, Vettel has none of it.

Arsenal are similar at this moment in time. We are not particularly playing much better than last season, but the momentum is with the side, leading us to 9 wins in a row.

Last season, conceding just before half-time to go in at 1-1, we would have capitulated in the second half. Just like we would not have hung on against Cardiff, Newcastle and Everton to take the victory. But winning breeds confidence, and the momentum that go’s with that is as important as any tactics and motivational pre-game speeches.

8 games into the season and we sit in 4th place; just 2 points off top.

Up next is a two week international break. Hopefully this does not break our momentum. When we return on October the 22nd, it will be Leicester at home, a good opportunity to make it 10 wins in a row. Sporting, Crystal Palace and Blackpool in the League Cup follow that before a home game against Liverpool.

That Liverpool game will really show where we are this season and what we can expect. Win, and we can start looking higher than top 4. Perhaps not fully in the title race as Manchester City look fantastic, but certainly in the race to be “best of the rest”.

Lose and the media will jump on top of us. Point out that our 3 games against the top sides have ended in defeat. Our target then realistically is 4th.

If we can go into that Liverpool game still on the coat tails of Manchester City, we will still be brimming in confidence.

Remove the negativity of years gone past and jump aboard the new Arsenal train. We are a club going places.

It feels good being an Arsenal fan again.

1st batch of wooden coasters sold out, thank you everyone.
More arriving in 2 weeks and on pre-sale now.https://t.co/UU8goaMVBO pic.twitter.com/60OrlYa7Bw