I hate the BBC’s Price of Football.

it does not give a fair reflection of the actual price of football, and is often used by lazy journalists to bash Arsenal for season ticket prices.

My biggest gripe is that it ignores that Arsenal fans get 26 matches for their season ticket cost, whilst every other Premier League club get just 19. That is 35% more games. It is unfair to compare them.

You would not expect Arsenal to have equal season ticket prices to Tottenham, Chelsea or Liverpool when they get 35% more games.

When you break it down per game, Arsenal cheapest season ticket is actually cheaper than those previously 2 mentioned clubs.

What is also ignored is that you can pay just £26 for tickets to Arsenal games.

A Fulham fan recently did a study on ticket prices. 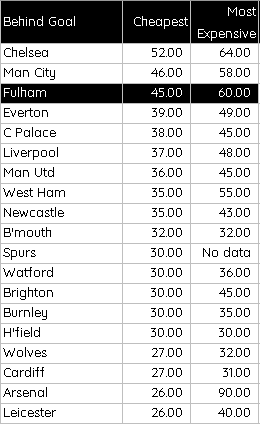 A comparison between all Premier League clubs match ticket prices for cheapest to most expensive for 'behind the goal'.@Fulhamfc are 3rd behind Manchester City and Chelsea with the highest cheapest match ticket (£45). #FFC

At £26, Arsenal’s cheapest ticket behind the goal is half the price of one for Chelsea. It is something that the media would not talk about as it would not get the hits, clicks and advertising revenue.

I have always been a fan of the way Arsenal categorise games.

It suits those who are happy to go to any game just to watch The Arsenal no matter the opponent. Anyone who pays game by game for every match pays an average prices. The only fans who are “punished” are those who decide only to go to the big games – Manchester United, Tottenham, Chelsea, Liverpool, Manchester City.

I am always of the opinion that you can not really moan about Cat A prices if you do not want to go to Cat C games. Go to both and the prices average out. Go to just Cat A and it is clear you only have an interest in big games.

Of course, the argument is easily (and rightly) made that Cat A is too expensive.

I am all for reducing ticket prices. They are across the board, not only at Arsenal or in the Premier League but down through the leagues.

For example Arsenal’s £26 is just £4 more than it would cost to pay on the gate to stand behind the goal at a Colchester United game in League Two.

My personal opinion has always been that the Cat A ticket prices subsidise Cat C, the League Cup, etc. That without Cat A, you could then not have the cheap Cat C tickets. And if someone only wants to go to Cat A games; that is their problem.

Manchester United do not have category tickets. Prices are the same no matter the opponent – £36. An Arsenal fan, on average, would pay £40 a ticket behind the goal if they went to every Premier League game. A difference of just £4.

So you could (and many do) make the argument that Arsenal should scrap category pricing and just charge a stand price for all games – in this case $30 to sit behind the goal in the lower tier.

Personally I would rather keep our system, have Cat A, B & C and offer the cheapest adult tickets behind the goal in the Premier League.