In The Big Lebowski, when the Dude meets the narrator, the latter says to the Dude that “a wiser fella once said, sometimes you eat the bear, and sometimes, well, the bear eats you”. In other words, win some, lose some. Today, at Goodson Park, the bear most definitely had a meal out on us from start to finish. Right from the moment Phil Jagielka’s goal settled the match as early as the tenth minute, we played as if our whole team were reinvented with two left feet.
Has there ever been a first half that we have played this season that has been so devoid of both inspiration and creativity? Highly unlikely. We just didn’t click, the midfield were nothing short of pathetic at times; God only knows why Mr. Emery didn’t play Aaron Ramsey from the start is a mystery. And where is Denis Suárez? The home team completely dominated the match in the first half, and to be fair, it looked as if we were lucky to go into the break only being 0-1 down.
The second half saw us wake up and smell the coffee, albeit rather briefly, which coincided with Aaron Ramsey replacing a tepid Mohamed Elneny and Sead Kolašinac being substituted for Pierre-Emerick Aubameyang (along with a change in formation) to try and zip proceedings up a bit, which looked okay for about a quarter of an hour or so. Somehow, we were unable to continue the momentum, and despite the speed of our strikers, we simply allowed Everton to regroup and dominate the match yet again. 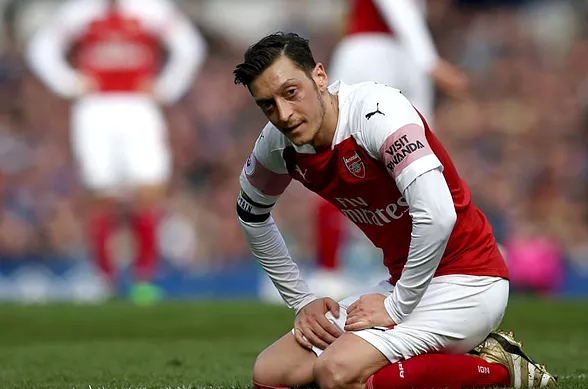 We did have our chances in the second half; Aaron Ramsey should have scored after Jordan Pickford’s disastrous save that never was, and Henrikh Mkhitaryan’s effort would have been easier to score than it was to miss, and with the shot going inches wide, our chances to equalise seemed to disappear with it. Frustration crept in like a winter snowstorm and again the home side appeared to take control with Gylfi Sigurdsson being denied by either excellent goalkeeping by Bernd Leno or poor shooting on his part with at least three efforts being blasted over the bar. Emotions spilled over with the two managers having words on the touchline that incredibly managed to involve players in their spat, with Mesut Özil petulantly throwing his jacket at the Everton manager after being substituted for Alex Iwobi with just fifteen minutes left of the match. Somehow we managed to keep the home team from scoring a second goal late in the game, and when Kevin Friend blew the whistle, it couldn’t be a moment too soon for Arsenal.

This was truly one of those matches that is best forgotten. We showed little character, poor defending and no decent midfield movement to mention in despatches, let alone efforts on the Toffees’ goal to be remembered. Arsenal may well have had 57% possession, but what use is that if we don’t convert this into goals? Points make prizes, not the proportional representation theory of a possession-based game. We can of course, still finish in the fabled top four at the end of the season, but it could be a close-run thing now, and we may have to be the servant of other team’s results, not the masters of our own. Arsenal have only recorded one away victory in the Premiership since November, and out of the remaining half dozen matches that remain, only two are in North London, which it has to be said, on our record is a sobering thought. Chelsea play West Ham on Monday evening, and if they are victorious, the West Londoners will propel themselves into third place, leapfrogging both ourselves and Tottenham Hotspur, which means that we will definitely have to win all of our games, nothing less will do. It seems that we need to sort ourselves out, and very quickly indeed; Napoli await in the Europa Cup on Thursday evening, and if they are watching this performance today (which they more than likely are) then they will surely fancy their chances at The Emirates. Let us hope that today was indeed a bad day at the office that won’t be repeated; like the man in the movie said all those years ago, today the bear eats you. Remember everyone, keep the faith, get behind the team and the manager, as these early days are going to be crucial for our future success in all competitions. Stick with the winners. Victoria Concordia Crescit.

My Tweets
Join 97,430 other followers