Crystal Palace (0) 1 Arsenal (1) 1
Premier League
Selhurst Park Stadium, Selhurst, London SE25
Saturday, 11th January 2020. Kick-off time: 12.30pm
(4-3-1-2) Bernd Leno; Ainsley Maitland-Niles, Sokratis Papastathopoulos, David Luiz, Sead Kolašinac; Lucas Torreira, Granit Xhaka, Nicolas Pépé; Mesut Özil; Pierre-Emerick Aubameyang, Alexandre Lacazette.
Substitutes: Emiliano Martínez; Rob Holding, Joe Willock, Reiss Nelson, Mattéo Guendouzi, Gabriel Martinelli, Bukayo Saka.
Scorers: Pierre-Emerick Aubameyang (12 mins)
Red Cards: Pierre-Emerick Aubameyang
Yellow Cards: Ainsley Maitland-Niles, Nicolas Pépé, Alexandre Lacazette
Arsenal Possession Percentage: 58%
Referee: Paul Tierney
Attendance: 25,468
After Monday’s disastrous start against Leeds United when Mikel Arteta began with three at the back, it was refreshing to see that he learned from his understandable error and reverted to the tried and trusted four man defence; all of which bore fruit in a satisfying first half that led the way as early as the twelfth minute with a well-executed goal from quick’n’slick Pierre-Emerick Aubameyang. Like all good things in our world recently, after receiving a clever pass from none other than David Luiz, ace midfielder Mesut Özil had an other worldly vision in which he slipped the ball through to Alexandre Lacazette, who, in the blink of an eye, placed it into the path of our number one bandit, who wasted no time in opening the scoring. Afterwards, domination was ours, and the match could have been there for the taking, as simple and cut and dried as that. We consistently and constantly applied pressure to The Eagles’ goal; although we were unable to score another one, we were clever and commanding in all areas of the pitch. In fact, the home side only threatened us on one notable occasion, which was when Cheikhou Kouyaté came close to equalising the scores; otherwise we quite rightly went into the hiatus feeling that the second half would bring us more opportunities to add on to our early lead.

Well, you know what the half time break can do to teams, don’t you? Firstly, young Mattéo Guendouzi replaced colleague Lucas Torreira, who never appeared again after the break, due to a painful collision with Nicolas Pépé at the end of the first half, and secondly, because of this injury, our natural midfield rhythm was disturbed, thus allowing Crystal Palace to make their mark on the match. We started to fall asleep at different times, which became disturbing to witness. Just nine minutes into the second half, we were punished badly for our lack of concentration. After giving away a pointless free-kick, Max Meyer crossed the ball from the right, Cheikhou Kouyaté stuck out a hopeful leg which merely pushed the ball to Jason Ayew; his left-foot gauche effort ricocheted off David Luiz and in a kind of bizarre slow motion (yet in real time, you understand) agonisingly went past Bernd Leno and into the net for the equaliser. All manner of disasters now unfolded, in which petulance and downright niggling behaviour from both teams became the order of the day from now on. With twenty-five minutes left on the clock, Pierre-Emerick Aubameyang completely lost his captain’s composure and launched into Max Meyer with a bone-crunching tackle that saw him sent off for his trouble (after the regulatory post-mortem VAR investigation, that is), an act that overturned his earlier yellow card incident. With a man down, Crystal Palace smelled blood from a wounded animal and so spent the rest of the match overtrying to score, but thankfully, to no avail; in fact, it was us that nearly grabbed the winner towards the end of the game with a superb strike from Nicolas Pépé that struck the post, only to fall back into goalkeeper Vincente Guaita’s arms. Thankfully, referee Paul Tierney drew proceedings to a close a little while later, and we came away from Selhurst Park with a point after a well-earned draw. 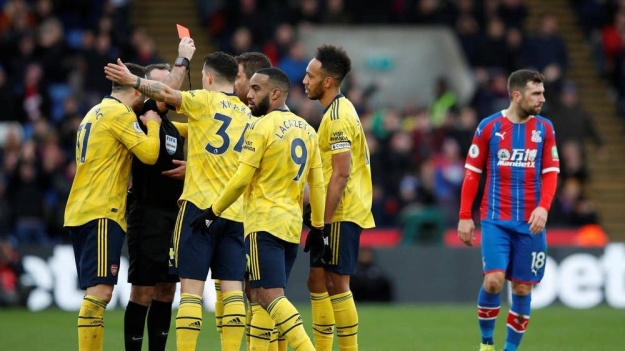 Despite the disappointing result, there were some good things out there in SE25. Ainsley Maitland-Niles superbly kept Wilfried Zaha at bay for most of the match, and Granit Xhaka certainly earned his money out there today, marshalling the midfield into a coherent unit. David Luiz and Nicolas Pépé played very well, but sadly Mesut Özil appeared to allow the match drift away from him, hence his substitution in favour of the excellent Gabriel Martinelli after seventy minutes. We are still deep in WIP (work in progress), and surely nobody is in any illusion that it will be a while for Mikel Arteta to stamp his marque on the team; he will, but patience is now the otder of the day, as mighty oaks from small acorns do indeed grow. Remember everyone, keep the faith, get behind the team and the manager, as this season is going to be crucial for our future success in all competitions. Stick with the winners. Our next match: Sheffield United at The Emirates on Saturday 18th January at 3.00pm (Premier League). Be there, if you can. Victoria Concordia Crescit.