Against Manchester City, Arsenal put in a predictable performance which led to a predictable result. Act II of the Return of Arsenal was equally as predictable.

The defeat against Brighton could have been a game from many over the last 5 years.

For all the technically or physically gifted players we have, the side is continually let down by players losing concentration, making mistakes and conceding goals.

Against Manchester City, it was individual errors in David Luiz that led to Arsenal demise. Against Brighton it was the lack of concentration of the collective.

Basics of defending a corner – if your opponent is setting up for a short corner, send two players out to it. This stops the opponents outnumbering you and having a free run at an easy cross.

Pierre-Emerick Aubameyang went out for the short corner; but Nicolas Pepe did not.

The Ivorian was close to the edge of the box, but for some reason decided to turn his back on play and run back to the middle of the box.

Had he stayed in position, he would have been a lot closer to be able to cut out the cross.

What the incident showed is the team has a lack of leaders. A lack of natural organisers. This is not anything new.

Where was the senior figures at the club screaming at Pepe to get out to the short corner. Shouting at him when he started making his way to the middle of the box. It was just poor. 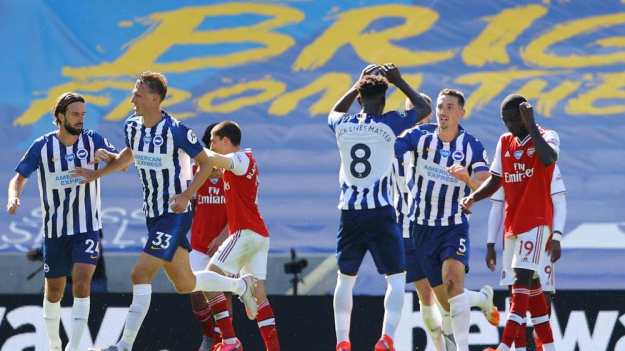 The second goal was well worked by Brighton, but again Arsenal turned off.

Some good one touch football from a throw on; but Arsenal players did not even get close to putting in a challenge.

At 4 minutes of 3 minutes injury time, were they expecting the final whistle to go? Did they completely switch off? Again; it as not good enough.

Losing concentration has long been a problem for Arsenal.

It has plagued the likes of Shkodran Mustafi and Granit Xhaka’s career.

How often have the pair been having a good game, only to make a lapse of judgement which leads to an error and in turn a goal?

From Arsene Wenger through to Unai Emery, our recruitment over the last 5 years has gone down hill.

In Wenger’s early days, recruitment was forensic. We would almost stalk a player to know everything about him, his life. Not only the type of footballer he is but also the type of character. What was between the ears.

Intelligence was key for Wenger, with many players enrolling in college and university courses at Arsenal.

That seems to have been discarded, and it has resulted in us having a collective of players that lack intelligence. Players that are unable to make decisions for themselves.

We have not had an organisers on the pitch since Per Mertesacker.

Arsenal need to ensure that leadership, organisation and intelligence is a key part of recruitment moving forward. It is why we are reportedly going to sign Pablo Mari – Arteta is highly impressed by his organisational skills on the pitch.

Like many defeats in recent years, we can point to poor referring decisions – a goal keeper injured from a challenge where the opponent had no intention of winning the ball, consistent fouling that what unpunished, an extra 90 seconds injury time found from 3 minutes.

But ultimately it was our own fault we lost. We switched off.

And you have to question why Arteta made 3 substitutions with 3 minutes to go that were for no reason whatsoever.

1 thought on “The Return of Arsenal Act II: As predictable and disappointing as Act I”