“Arsenal have 8 centre backs, we need to sell” has been written countless times over the summer.

As it stands, Arsenal have not sold a single one, with only Konstantinos Mavropanos leaving on loan to VfB Stuttgart in Germany – and he was not one of the “Magnificent Eight”.

So what is happening at the club with regards to our central defender situation?

Gabriel Magalhães was signed from Lille over the summer and William Saliba returned from his season long loan at Saint-Étienne, whilst David Luiz signed a new contract.

Arsenal also made the loan deal of Pablo Mari permanent.

A few people have questioned why Arsenal signed Pablo Mari, and then later went on to sign Gabriel, which pushed Mari down to 4th choice centre back – a role Rob Holding, Calum Chambers, Sokratis and Shkodran Mustafi could all have played.

Hindsight is a wonderful thing.

When Arsenal signed Mari, Gabriel was not on the radar as a transfer this summer.

Arsenal would have been scouting the Brazilian, but with a move likely next summer – so Arsenal agreed a deal for Mari back in January with Flamengo.

Gabriel then came available and Edu clearly felt the club could not afford to miss out on such a prestigious talent – even if it meant having one defender too many.

And that is how we came to sign both Gabriel and Mari.

Luiz, Gabriel, Saliba and Mari looked set to make up Arsenal’s defensive options with Rob Holding, Calum Chambers, Sokratis and Shkodran Mustafi all no longer required but none have yet exited stage left. The question is why?

A loan deal seemed to be agreed taking Holding to Newcastle, but the transfer quickly died and Holding found himself starting the first game of the season against Fulham.

Despite having 7 central defenders, Arsenal did not have a single one on the bench. This highlights why no one has left. They are all injured.

David Luiz picked up a knock prior to the Fulham game, but has now returned, whilst William Saliba was lacking in match sharpness having not played since March. A few games with the U23s might be needed for the Frenchman.

Those two joined Pablo Mari on the sidelines who is still recovering from damaging his ankle ligaments back in June. Mari is back in full training but it will be a couple of weeks before he is fully fit.

Without Luiz and Saliba in the short term, and Mari in the mid-term, Arsenal did the sensible thing and pulled the rug on the transfer of Holding to Newcastle. He was needed in Islington.

Holding still has a role to play at Arsenal albeit as 4th or 5th choice centre back.

If he remains at Arsenal this season, he will be back up to Luiz, Gabriel, Saliba and Mari; with the potential to replace Luiz as 4th choice next summer. It all comes down to whether he wants to be a bit-part player at Arsenal, or play week in week out at someone like Newcastle.

For now Arsenal can not afford to lose Holding. 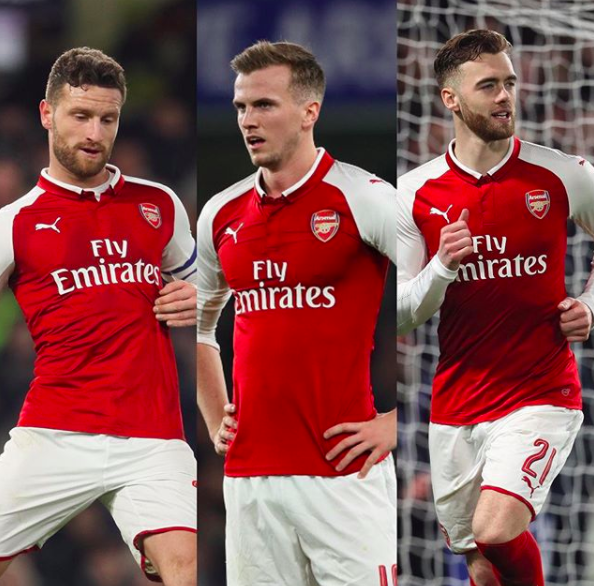 Keeping Holding means they can afford to lose Sokratis.

Sokratis is another who is currently injured.

The club said he sustained a “mild strain to right calf in training”, with an of returning to full training “within the next week”.

You feel once he has recovered, his deal to Napoli will go through.

The problem Arsenal face with the pair is they are both injured, with neither expected back in full training until October.

By the time they are “match fit” it will probably be November.

Injuries mean that they are not available to play (obviously) but also unlikely to be sold.

This puts Arsenal in a situation where we have 5 centre backs (Luiz, Gabriel, Saliba, Mari & Holding), and have an additional 2 that are not fully fit, who can not be sold.

So whilst selling Sokratis will take us down to 7 central defenders, only 3 are fit for selection for West Ham and 2 are not going to be full fit for at least another 6 weeks.

This will result in Arsenal not selling Chambers and Mustafi, and potentially not even registering the later.

Arsenal will then look to loan (or sell) the pair in January.

Mustafi, whose contract expires at the end of the season, could end up making a similar move to Cedric Soares.

A team might decide to pick him up on loan for 5 months, with the pre-contract agreement already in place to make the move permanent in June. A move like that would suit Arsenal, Mustafi and the club loaning him.

Likewise, we might see Chambers move out on loan in January, with an option to buy at the end of the season.

A similar deal could be done for Rob Holding if Pablo Mari has returned to full fitness, with Arsenal then having the option of Chambers, Holding or Mavropanos to return from loan and replace Luiz in 2021.

It might feel like Arsenal have a lot of centre backs at the club right now, but the reality is somewhat different.

Holding will stay, Sokratis will be sold, and not much else can realistically happen until January.