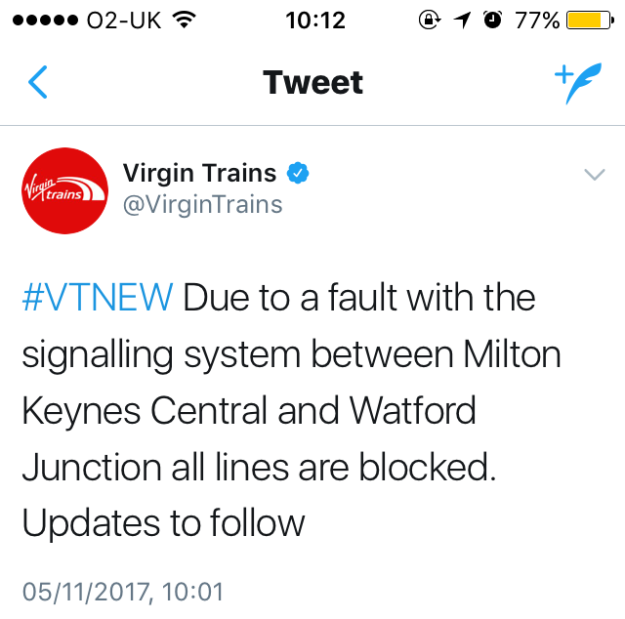 Over the years following Arsenal over land and sea, I have seen some brilliant results and some horrendous results. The later often turning into a massive drinking session resulting in the game being forgotten about. I have had some quality nights out after a defeat.

Yesterday, however, has to be up there with one of the worst games ever. And it has nothing to do with the.

Let me try and paint you a picture.

10 of us met at Euston. We were not hopeful of a win, but we would not let that get in the way of a day out to Manchester. Quick visit to the Sainsbury’s just outside the station to pick up a selection of lager and a bottle of vodka. Text comes through to my phone

Your 10:20 train to Manchester is nearly ready. Please head to the concourse and we will text you the platform shortly.

So there we are, 10 of us, waiting just infront of Upper Crust looking out the board. Or train says preparing Not long now until the platform is up.

5 minutes later, we are still waiting. And another 5 minutes. Then it turns to DELAYED, so I look at Twitter;

Having been to a training course in Manchester the week before, when the exact same signalling problem occurred and we were delayed by 2 hours, I feared the worst. We were already cutting it fine(ish) by getting into Manchester at 13:05, no time for a pint in the Mayfield, head straight to the ground. Any delay would risk us missing the start.

About 15 minutes after the delay came up, it flashed up CANCELLED. Great. At the same time, the next train, the 11:20 that would get us in at 13:55 also flashed up cancelled.

So here we were, with a few beers each, at 10:40 in the morning. The sensible bloke would head home, stick the beers in the fridge, and get them out for when the game starts. But we are not sensible.

Instead we went outside the station, took over one of the benches, and decided to drink the beer until we had decided what to do.

1 and a half cans in, one of the lads looked at the board. The 11:20 is boarding he shouted. Sod it, lets jib on – knowing that our tickets would be valid. So we jumped on, headed straight to first class, and took up our seats.

Train left on time. Result. Be in Manchester by 13:55. Taxi to the ground, we will be in by kick off.

Just as we went through Coventry, and announcement came over the tannoy. Please note this train will be diverted due to problems between Rugby and Stafford. This will add an additional 15 minutes to our journey. Great.

That would have us in at 2:10. We were going to miss the start of the game. But at least we would be there.

Train arrives at 2:10, get in the cab at 2.15, get to the ground. As we were walking round the ground, we heard Manchester City’s first goal go in. Great. Already 1 nil down and we have not even got in yet. Brilliant.

The game is for another day, another blog, if I can be bothered. A predictable result.

Out the ground, hiked it the station, time for a quick pint.

Well it would have been easy had Virgin Trains not then cancelled the 17:35 due to lack of train station. Not a problem, there is a 17:55, lets jump on that, head to 1st class again, only 20 minutes late.

The train was busy, people standing in the aisles throughout, but we had seats. If ever trains are delayed or cancelled, just head to 1st class, the guards will rarely move you.

Making good time, through Crewe, Stoke, Milton Keynes, then we hit Watford, and the train stops. No announcement, radio silence. 30 minutes we sat there just inside of Watford, train not moving. We checked out Twitter and noted people saying that they had been were on a 3pm train from Manchester and were still not at Euston, they had been waiting outside Euston for 3 hours.

Great, we thought. Another delay. As a traffic jam of trains was outside Euston, all slowly making their way in, unloading the passengers before moving off, we knew we would be in for a long night.

We wondered why we had not been allowed off at Watford Junction to jump on the unaffected London Overground or London Midland. That would have made sense. Instead we were in a queue, with no beer, in an overcrowded train.

If it was a Saturday, we would not have cared. We would have got on it at the George just outside Euston and by midnight would have no longer cared. But it was Sunday. A blasted Sunday. And we all had work this morning.

Thanks to the train companies, we ended up with nearly 4 and a half hours worth of delays. That is longer than a train journey to Manchester and back.

What a horrible trip.