Yesterday morning’s hit gathering headline comes from the Daily Telegraph, who reporting that the new Arsenal manager will be “restricted to a £50m summer transfer budget”. As with anything Arsenal, fans have thrown their toys out of the pram.

The reaction from Arsenal fans, the bitching and moaning, is not to be unexpected. When even the most average player like Granit Xhaka now costs £35m, £50m is just not enough.

“We need to spend £150m this summer” one said to me on the news. And yes, this is true, we do need to spend big. But we also need to look at the bigger picture. Because the fans moaning about having just £50m to spend are complaining without having the full knowledge.

To quote one of the Arsenal Fan TV lot, it is about “net spend” not total spend. So Arsenal might have a transfer budget of just £50m, but this is actually a big chunk of cash. In fact, only twice in the clubs history, have we spent more than £50m. 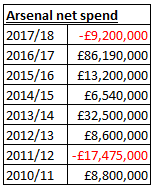 So it pretty much is a non-story that Arsenal “only” have £50m to spend this summer, as over the last 8 years, we have a net spend averaging just £16m. So the real story could be New Arsenal Manager Has 3 Times As Much Money To Spend.

And now this is where it gets interesting…

So if we spend £50m net this summer, it will actually be twice as much as we have spent on average over the last 5 years. I will also be superior to Tottenham, Chelsea and Liverpool.

It still leaves us massively behind the likes of Manchester United and Manchester City, but this shows the gulf in finances.

Can we expect to be spending the same as Man U when they have a turnover of nearly £200m more than us? Or the same as Man City who are unlimited funds through their owners?

Now we could all moan that Stan Kroenke should put his hand in his own pocket, but I prefer the Manchester United or Liverpool model of being self sufficient, not a rich mans play thing.

For Arsenal to spend more, they need to make more.

I have been a long term critic of Ivan Gazidis and the commercial revenue team.

We have behind Manchester United, Manchester City, Chelsea and Liverpool in terms of commercial income. The boost we get from stadium income is lost through poor shirt deals, no sleeve deals, and not getting enough money from Puma.

Some new deals are in progress. Our sleeve deal is expected to bring in £15m, and the new deal with Adidas/Puma/Nike will add an additional £25m in revenue. But more needs to be done to bridge that gap between ourselves and those above us.

We showed a half yearly profit before player trading of £20m in our accounts. It is from your profit that your transfer budget comes from. So how can we expect to have a £200m transfer budget if the club only makes £40m? That would leave us losing £160m.

Football is a business, at the end of the day. Unless you want to put the club in massive debt, you should only spend what you bring in.

So we have established that £50m for incoming transfers is OK, about level with other sides above us (excluding the Manchester 2). To allow us to spend more, we have to maximise player sales.

Selling the likes of Davis Ospina, Calum Chambers, Shkdoran Mustafi, Joel Campbell, Lucas Perez, Chuba Akpom, Carl Jenkinson would raise up to about £80m. If all that money is made available for the new manager, suddenly we are looking at having well over £100m to spend on new players.

As I wrote earlier, we have at least 10 players that are expected to leave. These will both raise additional funds and save on salaries.

Understand how things work, rather than just read the headline.

On a final note, lets be honest, any talk about budget is just made up rubbish.

We are in April. A budget will not be set until the new manager is appointed, until we have (or have not ) secured Champions League football, and until season ticket sales come in.

And then you need to take into account the amortisation of the transfer fees, wages, signing on fees, agents fees and much more. Any head line about transfer budget is literally made up.

Have a good evening