I am writing the first half of this blog before a ball has been kicked. Despite what the result might be, Arsene Wenger is right in his team selection today.

The Premier League is pointless. We are unlikely to finish higher than 6th and need just 3 points from 4 games to ensure we finish no lower than that position.

With a key Europa League game ahead on Thursday, I would actually argue that playing the likes of Granit Xhaka and Hector Bellerin is a mistake, not failing to play other top players.

I’ve seen countless people “defend” George Graham finishing 10th in 1993 because we “rested people for the cups”. Now those same people are complaining that Arsene Wenger is resting players for league games so that they are ready for Cup.

It is a good example of people changing their narrative to suit the agenda. Which is odd as the only agenda we as fan and a club should have is ensuring that we have the bear chance of beating Atlético Madrid in Thursday.

I’d rather Arsenal play the entire U23 team (plus Aubameyang) for the last 4 games of the season. A group of players who are top of the Premier League 2 (U23 league). Stick some of our FA Youth Cup finalists on the bench.

Let’s give Holding, Chambers, Movraponas, AMN, Nelson, Willock and Nketiah some PL starts. See if any are going to be good enough.

I would pretty much play this for the rest of the season:

We have all moaned that Wenger has never really given young English kids a chance. Now we moan that he is playing them in a “meaningless” match.

I saw one say “I’m all for giving youth a chance I’m not sure united away is the best fixture for it”. The same bloke would probably complain if we played our strongest XI today and Jack Wilshere, Aaron Ramsey, Mesut Ozil or Alexandre Lacazette went off injured.

We might lose 4-0, but the team selection is right. 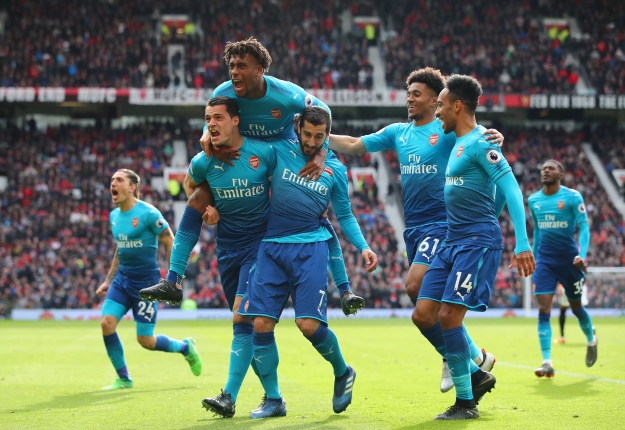 The game certainly felt like a pre-season friendly rather than a match between two rivals at the business end of the season.

If it was a pre-season game, you would be delighted by the performance of some of the Arsenal players, despite the result.

Man of the match for me was Ainsley Maitland-Niles. At just 20 years old, he showed class and ability. Of all the youngsters in the field, he shone the most. You could see that he has played more than any of the others last season.

When we sold Francis Coquelin in January, some questioned the decision. But in Maitland-Niles we have a defensive midfielder who is better technically and can also replicate the Frenchman covering full back.

The conversation he had with Paul Pogba at the final whistle was interesting. They were chatting for some time, and Pogba clearly had gained some respect for the Arsenal youngster.

I expect him to play every Premier League game before the end of the season, and be pushing for the first team next season.

Konstantinos Mavropanos looked solid at the back and will cause the new manager a selection headache next season.

You can not give all of Mavroponas, Chambers and Holding the game time to develop. Next season we will have to pick one. The Greek lad did his chances no harm.

It is easy, however to go OTT with the performance of Mavroponas. We saw similar with Holding and Chambers. Maybe a loan deal to another Premier League club would be ideal?

Let Mavroponas play 38 games elsewhere, have Rob holding as 4th choice centre back, and Chambers as back up for Hector Bellerin.

Reiss Nelson looked a little lightweight, but it is important to remember that he only turned 18 in January. He is already staring for the club at U23 level. The fact he has already outgrown the U18s – who are in the FA Youth Cup final highlights his talent.

Another who could do with playing the last 3 Premier League games of the season.

It was a frustratingly predictable result. Manchester United getting a late winner despite Arsenal playing very well.

Thierry Henry called it right, Arsenal are brilliant between the boxes, but not good enough in both boxes.

What is for sure is that there is some talent at the club, and we need to keep giving some of this talent a run out between now and the end of the season.

In the new season, let’s change our default setting of moaning about everything to being a little bit more positive and backing the lads.

Please RT…even if this isnt for you it maybe for your followers. pic.twitter.com/48PIJykA99

4 thoughts on “Arsene Wenger vindicated with team selection – despite defeat”