After the joy of watching England over the summer, the national team has reverted to type since.

Gareth Southgate has lost almost all of the good will gained due to the decision to pick Wayne Rooney for a goodbye cap, make Fabian Delph captain, and select some horrendously average players – the likes of Delph, Michael Keane, Lewis Dunk and Harry Winks.

I did not watch last night games. I could not care less for it. Mainly due to the Rooney fiasco, but also due to what Southgate is doing to the national team at the moment.

Anyway, it has been the dullest of dull interlulls, but yesterday we had a bit of breaking news as Aaron Ramsey was close to agreeing a deal to join Bayern Munich next summer on a free transfer.

These things do have to be taken with a pinch of salt. Ramsey is not actually allowed to discuss anything with a foreign club until January 1st. Although I am not naive enough to think that his people have not spoken to top clubs around Europe.

Moving to Munich would (and would not) make sense for him. I would be very surprised if he moves abroad with such a young family – his wife gave birth to twins a month ago.

However Munich seems like a good fit, and I can see him doing very well in Germany.

They are one of the few clubs that would pay him what he wants, and with James Rodriguez likely to leave and Thomas Muller seemingly shot, you can see Ramsey starting in the advanced midfield position he thrives in.

There are a couple of bellends at games who seem to laugh at booing him. Whilst he wears an Arsenal shirt, we should be backing him. And remember it is Arsenal’s decision to let him go, not his decision to leave.

I wish him luck if he joins Munich. 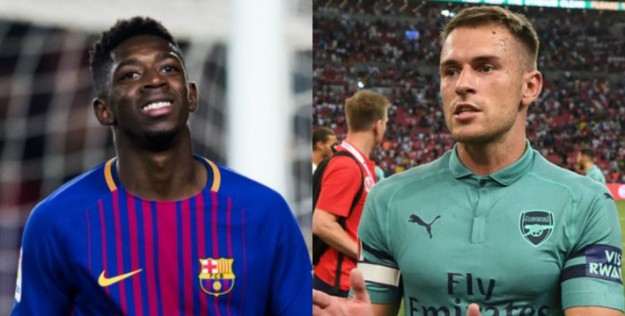 A few days ago he was heavily linked with Liverpool. I posed the question on Twitter as to whether Arsenal should be in for him at a similar price in January.

At this price, should Arsenal make a move?

The result was close, but the majority would take him.

At £85m, he would take up almost all of our summer 2019 transfer funds, especially when you take into account that he is rumoured to be on £220k a week at Barcelona.

Despite this, I would still move for him.

Next season we need two wingers, a left back and a centre back. If we assume Reiss Nelson is going to continue his fine form and development in Germany, we can assume that between him and Alex Iwobi we have the right hand side locked down. Nelson will save us £30+.

What that means is we could double up on the left hand side. use the funds we would have assigned to signing a right winger and put them towards the left winger.

attempted to do some back of the fag packet maths yesterday to show how we can sign Dembele and still have enough in the pot to secure the centre back and left back we need:

We will be able to add about £50m in costs to the squad next year (amortised transfer fees, salaries, agents fees)

Losing those will free up about £25m. This excludes any incoming transfer fees

By the time you add other costs (agent fees, signing on fees, other bonuses, etc) that’ll be pretty much the transfer budget done

Any fees from selling Mustafi / Chambers is then a Brucie

Before people get hung up on the left back, I have since changed my opinion, that we should offer Nacho Monreal one more year, cash in on Kolasinac, and buy a left back who has the potential to be long term first choice. But that is a debate for another day.

I might attempt to expand on what Arsenal can and can not buy another day.

Whilst we are talking about wingers, I encourage you to read this excellent blog by Jorge Bird detailing the talented young wingers in Arsenal’s youth teams.

I have seen our youth play a few times recently, certainly not as much as Jorge (or JW who blogs here), and we do seem to have a lot of the same type of players coming through.

We have an abundance of rapid wide men throughout our youth system, but they are also technically excellent.

Nelson aside, the two I am most excited by Xavier Amaechi and Bukayo Saka.

Amaechi is a left winger and some have claimed that he is the quickest player at the club. Currently injured, he has a big future and next year would be knocking on the door of the first team squad for the summer tour and League Cup games.

Still just 17, he has a bright future. Will we follow the same route as Nelson with him? Send him abroad a year where his sort of talent does not get kicked out of him (unlike in the Championship), before he returns to Arsenal for 2020/21 to compete for a place on Arsenal’s left hand side.

Coming up behind Amaechi is Saka, who has only just turned 16. The youngster has taken advantage of his older team mates injury to cement a a place in Arsenal’s U23s. He has also appeared for England U19s.

Saka is perhaps a year behind Amaechi in terms of development. Despite both being born in 2001 (how old does that make you feel?), they fall into different English school years. That does have an affect on development and when they could start playing more competitive football.

I expect Saka to continue his development and we will see more of him in the summer of 2020, before he pushes into the first team in 2021.

What is exciting is underneath Alex Iwobi, we have 3 very talented wingers in Nelson, Amaechi and Saka, all of whom will be given time to develop and make an impact over the next 2 or 3 years.

That’s all from me today, the cricket is on and I have some cleaning to do. Enjoy your day!