Our next opponents in the UEFA Europa League tonight, are FC BATE Borisov, who hail from the city of Barysaw in Belorus. Their name is an acronym of Borisov Automobile and Tractor Electronics and they are by far the most successful Belorussian team with 15 league titles, three Belarussian Cups and four Belarussian Super Cups; in fact they are in yet another final of the latter, against Dinamo Brest on 2nd March. Of course, we played them last season in the same competition, beating them 10-2 on aggregate; let’s hope that we can emulate this score again this year.

Some chance of that. The way in which Stanislav Dragun’s headed goal for FC BATE Borisov at the end of the first half, after a pin-point cross from a free-kick by Igor Stasevich rather summed up Arsenal’s game management here in Belarus tonight. Despite a bobbly pitch, cold weather, and our domination of the first fifteen minutes of the match, we simply allowed the home side to define their personalities in front of their own crowd, and at times it was hard to work out just who was the away side here. Arsenal did have chances, with Henrik Mkhitaryan and Alexandre Lacazette’s efforts being amongst the best we could muster, but with the midfield unable to impose their will on the game, along with a bizarre back three defensive formation, it seemed as if the Londoners found it impossible to take their game up that extra notch when required. Every time we lost the ball, the players of FC BATE Borisov capitalised on our errors, and above all this, managed to keep their heads whilst it looked at times during the first half, as if we may be losing ours. 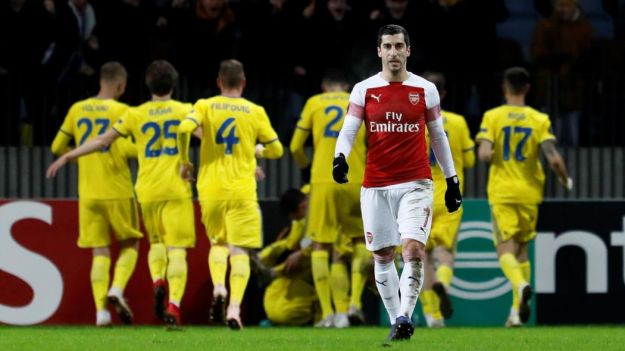 New half, same problems. But having said that, we did get the ball into the net after fifty-six minutes, but unfortunately it was cancelled out, as Alexandre Lacazette was offside when he put Sead Kolašinac’s cross away with a sweet side-footed volley. Back to the drawing board. Pierre-Emerick Aubameyang and Lucas Torreira replaced Ainsley Maitland-Niles and Granit Xhaka after 68 minutes; just five minutes later, our final substitution happened, with the appearance of Denis Suárez for Sead Kolašinac, who to be fair, did try to supply our strikers with goalscoring chances throughout the match. If this wasn’t bad enough, Alexandre Lacazette was given a red card for violent conduct five minutes before the end of the match when he caught Aleksandar Filipovic with an elbow in retaliation which in hindsight was a very stupid thing to do; heat of the moment it may be, but in the long run it has cost both him and the club dear.

What has happened to us? Talk about a St. Valentine’s Day Massacre in Belarus! The last occasion that we played FC BATE Borisov in their ground, we ran out 4-2 victors, but tonight we looked anything but winners. We looked like an above average middle of the table side who was totally out of their depth in this competition. Mr. Emery needs to find out exactly who wants to play for both himself and Arsenal Football Club and get rid of those who don’t. The problem is that many of them are still Mr. Wenger’s men and Mr. Emery needs to impose his ways and methods on this club very quickly indeed otherwise these players will drag Arsenal down into the middle of the table within a short space of time. Over the next few weeks we are playing some very important Premiership matches, and to be honest, this squad doesn’t exactly fill me with confidence at this present time. God forbid it should happen, but if Mr. Emery simply decides that he can’t change things and walks away in the summer, we will be in big, big trouble, as I don’t believe that we can attract any other top class European coaches (or players, for that matter) of this calibre unless we are Champions League participants. Part two of this tragic tale unfolds at The Emirates next Thursday; we should win, but then again we should be doing a lot of things, shouldn’t we? Remember everyone, keep the faith, get behind the team and the manager, as these early days are going to be crucial for our future success in all competitions. Stick with the winners. Victoria Concordia Crescit.