Rennes (1) 3 Arsenal (1) 1
UEFA Europa League, Round of 16, First Leg
Roazhon Park, 111 Rue de Lorient, 35000 Rennes, France
Thursday, 7th March 2019. Kick-off time: 5.55pm
(4-2-3-1) Čech; Mustafi, Sokratis, Koscielny, Monreal; Torreira, Xhaka; Mkhitaryan, Özil, Iwobi; Aubameyang.
Substitutes: Ramsey, Maitland-Niles, Leno, Suárez, Guendouzi, Kolašinac, Nketiah.
Scorers: Iwobi
Red Card: Sokratis
Yellow Card: Xhaka
Referee: Ivan Kruzliak (Slovakia)
Attendance: 29,778
Our opponents tomight are (to give them their full title) Stade Rennais Football Club, commonly referred to as Stade Rennais, SRFC or simply Rennes; they are currently sitting at ninth position in Ligue 1. This famous old football club has won the Coupe de France twice, but are better known in recent times as having one of the best youth academies in France; indeed, one of their alumni is our own Sylvain Wiltord, who of course played for us from 2000 to 2004, winning two Premier League titles, two FA Cup winners medals, and a 2002 Community Shield plaque as well as scoring 49 goals in 175 matches. Their manager is Julien Stéphan, son of the assistant team manager for the French national team, and has forged a reputation for playing good, open football in a modern, yet classic European style.
What a shambles. And yet, it all started so well for us with a superb Alex Iwobi goal after just three minutes, when he curled a ball from the outside of the Rennes box into the net. In reality, it may well have been a low cross, but either way it was a welcome memory to take away with us before things fell apart. And fall apart they certainly did. To be fair, for twenty minutes or so after the goal, Arsenal were creating chances although they were squandering some good efforts in front of goal with both Lucas Torreira and Shkodran Mustafi being desperately unlucky not to add to Alex Iwobi’s earlier strike. 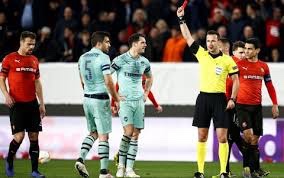 Arsenal just simply caved in across the midfield and found it more and more difficult to hold back Rennes as they grew in confidence. Petr Čech was simply immense in goal throughout and it has to be said that his sterling performance at Roazhon Park tonight stopped the home side from scoring more goals than they eventually did. Sokratis just appeared to lose all semblance of common sense tonight with some crazy tacking and ridiculous off-the-ball antics which only made matters worse. Just before the break, he got his marching orders from the referee for a truly amateurish ham-fisted tackle outside the Arsenal penalty area. We paid dearly for this dismissal; the ball bounced back off the Arsenal wall to the initial taker of the free kick, Benjamin Bourigeaud, who unceremoniously smashed it past the outstretched Petr Čech and into the net to equalise the scores.
The second half was just truly appalling from our point of view. We looked tired, dejected and very, very sloppy indeed with amateurish mistakes being made across the pitch by players who really should know and do better at this level. It was merely a matter of time before a second Rennes goal happened, and it arrived after 65 minutes when Mehdi Zeffane crossed from the right that deflected into the net off of a helpless Nacho Monreal that gave Petr Čech little chance to stop the shot. Although Mesut Özil had a weak shot saved by the Rennes goalkeeper Tomáš Koubek, fairly easily towards the end of the match, Arsenal were truly not at the races tonight. Just twominutes before the end, Ismaila Sarr brought proceedings to a close with a superb diving header to make the final score 3-1 to Rennes.
We are going to have to a whole lot better than this in the return leg next week; it is clear that Rennes are no FC BATE Borisov, and unlike them, they are organised, well drilled and certainly no pushovers. After the Spurs match last Saturday, it is hard to believe that this is the same team; and with Manchester United lying in wait on Sunday afternoon, we can only pray for some kind of miracle based on these events. Is also not time that we saw more of Dennis Suárez now? Sunday afternoon could be a good time for his full debut, and after this appalling disintegration, he may well be the tonic our troops truly need. Something needs to be addressed; we have no leaders on the pitch, no organisation and our away form is poor. What is to be done? Remember everyone, keep the faith, get behind the team and the manager, as these early days are going to be crucial for our future success in all competitions. Stick with the winners. Victoria Concordia Crescit.