And so it was said a little while ago that Arsenal had the easier run-in to the end of the season and that a top four position was bolted on, no problem. Really? Tonight here at Molineux Stadium, they looked anything but a top four Premiership team. In the first half, we were overrun consistently and constantly by a very compact, yet confident Wolverhampton Wanderers side, who to be fair, never looked as if they were troubled by Arsenal at all.
Premiership football has suddenly become a game of statistics, which in the wake of tonight’s match suddenly means nothing at all; especially when you consider that Arsenal had 70 per cent possession; even more damning when you see that out of eleven shots on the Wolves goal, only one was on target, and that was the solitary headed goal which was scored by Sokratis from a Granit Xhaka corner just ten minutes from time which cosmetically made the result better than the appalling performance that it truly was. 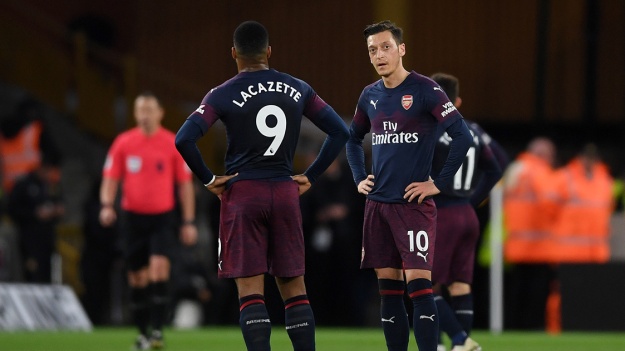 The Arsenal defence was in total disarray almost right from the start; Wolves were unrelenting in their attack, ruthless in delivery. Nacho Monreal brought down Jonny Castro Otto 25 yards out from goal. Ruben Neves sensed an opportunity, took a chance, struck the ball perfectly and we were one-down. Sadly, from this moment until the end of the first half we looked rather like a punch-drunk fighter that had done far too many rounds. The home side were so dominant, that it almost seemed as if they had an extra man or two on the pitch; nine minutes later Matt Doherty scored with a looping header over Bernd Leno’s head and by now things were looking dreadful for us. By half time Diogo Jota had put the home side three up with no reply from us; the worst crime was that we didn’t even look like replying either.

The second half saw us start as the first half finished, and despite replacing Henrikh Mkhitaryan and Lucas Torreira with Sead Kolašinac and Mattéo Guendouzi on the hour we struggled badly. To be fair, going into the second half three goals down was always going to be a huge mountain to climb for any club, but by the time Mr. Emery replaced Alex Iwobi with Eddie Nketiah with twenty minutes left on the clock, it looked exactly what it was, a last-ditch attempt to breathe some life into a lacklustre team performance. Incredibly, Alexandre Lacazette nearly scored, and would have done but for an excellent Ryan Bennett block just a minute or two before our solitary goal, scored (and taken well too, it has to be said) by Sokratis. Our players looked mightily relieved when Stuart Attwell blew the final whistle, but all in all it was a poor performance which could easily have major ramifications when the final league positions are determined in a few weeks’ time.

Another poor away performance in the Premiership by us again, and again the frail and brittle defence, like in the Crystal Palace match last Sunday were exposed and punished heavily by the opposition. Many supporters blamed Shkrodan Mustafi for the defeat in the last match, but tonight he wasn’t playing, and we still managed to lose, and this time put in an even worse performance than then. Where was Mesut Özil tonight? Or Alex Iwobi? Or Lucas Torreira? We simply cannot carry on like this, and in this manner too. It’s becoming obvious that the Europa League is our only chance of glory now, and surely Mr. Emery has to throw everything he can at this match on Thursday now, otherwise the disappointment around the club will be almost toxic. Leicester City at the King Power Stadium lie in wait on Sunday morning for us; these players must get it together now and realise that surely nothing less than a victory will suffice. Remember everyone, keep the faith, get behind the team and the manager, as these early days are going to be crucial for our future success in all competitions. Stick with the winners. Victoria Concordia Crescit.