With 13 minutes to go and the score at 0-0, Leeds manger Marcelo Bielsa beckoned over his young striker on loan from Arsenal.

“Go win us the match Eddie” he probably said. 3 minutes later he did that scoring the only goal against Brentford to send Leeds top of the league.

That made it 2 from 2 for the England U21 international, who scored on his debut against Salford City in the EFL Cup. 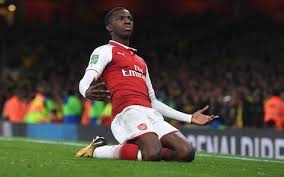 This loan move to Leeds is going to be important for his development.

With Pierre-Emerick Aubameyang and Alexandre Lacazette ahead of him, Nketiah would not have seen much game time at The Arsenal had he stayed this year.

His only starts would have been in the EFL Cup and Europa League. He would not have even been guaranteed a place on the bench in Premier League games.

Arsenal reportedly made clubs looking to loan Nketiah do a presentation to the player and club. A lesson learnt following Serge Gnabry’s disastrous move to WBA a few years ago.

At Leeds, Nketiah has found himself behind Patrick Bamford.

Whilst this might be frustrating for Arsenal fans, and Nketiah himself, it will be good for him to have to battle to get into the 1st team.

Bamford scored a brace against Wigan at the weekend and, with 3 goals in 4 league games this season, deserves to be starting ahead of Nketiah.

Competing for a 1st team spot will push Nketiah even more, and I am confident sooner rather than later the 20-year-old will be starting regularly for Leeds.

The Championship is a tough league. From day one you are pretty much playing twice a week. Add in the cups and that is over 50 games a season.

Top end Premier League clubs regularly play 50 games a season, but they have the squads to cope. Down in the Championship sides have to continually shuffle the pack; and that leads to game time.

Nketiah will end up with 30+ starts for Leeds this season across all competition, and will play over 40 games. It would not be a surprise to see him get close to 30 goals in all competitions.

That is important development game time that he would not have got at Arsenal.

Nketiah will return to the club in a year fitter, stronger and hungrier, ready to compete.

Taking into account the age of Aubameyang and Lacazette, he has a future at Arsenal.