I am usually reluctant to jump on the bandwagon of a young player after a handful of good games.

Often you will end up disappointed, as the player becomes overhyped without really having performed consistently.

Take Kostantinos Mavropanos as an example. After 1 OK game against Manchester United, people were putting him in their first team. He has barely been seen since and is now on loan in Germany somewhere.

Over time you get to recognise players that might just be a flash in a pan. But then someone comes along who performs consistently to a high level, and you know you have a player on your hands.

Cesc Fabregas was such a player. At 16-years-old it was clear and obvious he was going to be a superstar. Dominating midfields week in, week out as a teenager. Jack Wilshere was similar, but sadly injury got the better of him.

In similar eras we had Fran Merida and Henri Lansbury. Both were hyped up, neither made it at Arsenal. You could tell when they were playing that they did not quite have what it took. Something was missing.

In Gabriel Martinelli Arsenal have something special. 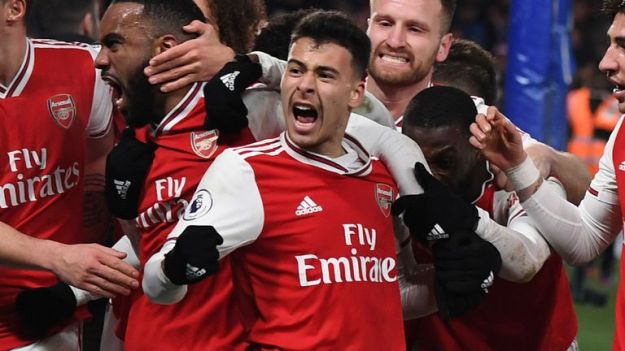 Just 18-years-old, Martinelli is in double figures for the season. 10 goals in 21 games. He has impressed everyone with both his ability and attitude.

He reminds me a lot of a young Luis Suarez.

When Suarez burst on the scene firstly with Ajax and then with Liverpool you could see that he was a level above other strikers in world football.

Suarez had remarkable technical ability, capable of scoring all sorts of goals. Was a threat when both running at players and in the 6-yard box. He could be your number 9, your second striker or play out wide. His work rate was also impressive and something that elevated him above other goal scorers.

Martinelli is showing similar abilities at Arsenal. He has multiple dimensions to his game.

We have already seen him play upfront and out wide. He has proved himself as a goal scorer. But he has also shown he is equally as comfortable on the wing – the skill and vision he showed against Crystal Palace nearly set up Nicolas Pepe to go close to a late winner.

When it comes to the goals he scores, he has variety to his game.

On top of his ability, he also has a fantastic work ethic. Whether that is closing down centre backs when down the middle or tracking back full backs when on the wing. It is rare you get a player with his ability who also works hard for the team.

With the modern game being about pressing from the front, you need a striker who is more than a goal scorer. You need someone who will work hard for the team, run the channels, put pressure on the defenders.

Seven years ago Arsenal tried and failed to sign Luis Suarez. In Martinelli we have a player on our hands with very similar attributes.

If Martinelli continues to work hard and develop his game, we could have a complete forward on our hands. Someone who could lead the line for the next 10-years.

1 thought on “Do Arsenal finally have their Luis Suarez?”