And so, back to The Europa League for the first time in this calendar year, which has now become a crucial fixture in a soon-to-be-important competition for us. Mesut Özil has not travelled with the players for the match, due to personal reasons; however, we welcome the return of Mattéo Guendouzi to the team tonight, after having being dropped for the 4-0 drubbing of Newcastle United at The Emirates last Sunday afternoon.

Right from the get-go, we absolutely dominated the match with superb on and off the ball play, and for the first twenty minutes, our chances were many and the accuracy of the shots were few; however, having said that, both Alexandre Lacazette and Gabriel Martinelli were desperately unlucky not to open the scoring with golden chances, which looking at them from afar, should have had Malheiro de Sá, the Olympiakos goalie picking the balls out from the back of the net. The criminal thing was not only did we not score, but we also started to lose our grip on the match, thus allowing the home side through with several chances, in which Bernd Leno worked extremely hard in order to keep a clean sheet; the best save he made in the first period came when Youssef El-Arabi’s shot was parried at close range just after the half-hour mark. The game now became pedestrian and slow, and the half-time whistle came as a relief for everyone in the stadium. 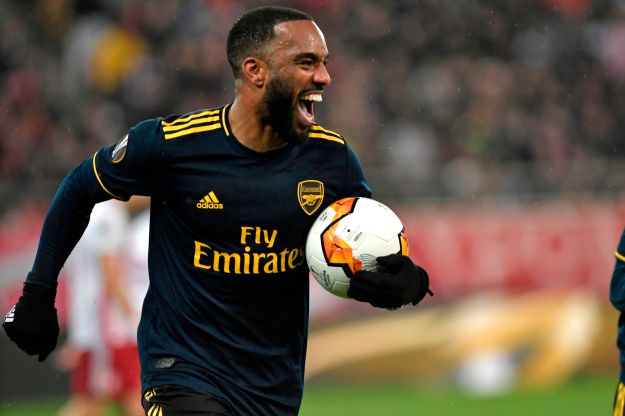 Bearing in mind that the second half of our matches this season regularly shows a resurgence, the team did not disappoint anyone here tonight. When the tiring Gabriel Martinelli was replaced by Dani Ceballos after the hour mark, we sensed things would change for the better, starting with a David Luiz free kick, in which he was unlucky not to open the scoring. The match started to show some spark now, with both sides showing a desire to score, and in doing so, quite a few hefty tackles started to fly in here and there, so much so, that five bookings were taken by Felix Zwayer, two of them being Arsenal players, Granit Xhaka and Shkodran Mustafi, both of which seemed minor and pointless in the greater scheme of things. Mikel Arteta must have felt that enough was enough when Mathieu Valbuena’s shot went narrowly past Bernd Leno’s post, that he made his second substitution of the night, and this one turned the fortune of the game in our favour. When Nicolas Pépé replaced the ineffective Joe Willock with a quarter of an hour left on the clock, his mere presence lifted the by-now fatigued and frustrated Arsenal team. Suddenly we played faster, speeding up through the gears, and on the eighty-first minute, the trap was sprung. Pierre-Emerick Aubameyang received the ball and quickly flicked it into the channel for Bukayo Saka to run onto; slipping away from his man, he passed the ball into the six-yard box for the predatory Alexandre Lacazette to score easily from close range. In the remaining minutes, Sokratis Papastathopoulos hit the bar and Alexandre Lacazette was desperately unlucky not to score again, but it was not to be, and we return to North London satisfied with a job well done, even though it looked a different proposition in the latter stages of the first half.

Yes, it was a dull match at times, and yes, we were lucky not to concede a goal early on the match, but the ends justify the means, and we go into next week’s return leg in the ascendancy, which is always a very good and warm feeling. Bukayo Saka was again the star of the night with his intelligent play and his pinpoint passing into our opponents’ box in order for the strikers to run onto, and Bernd Leno played superbly in preventing Olympiakos from scoring. Okay, it wasn’t pretty, but we won, and let’s enjoy this moment. Remember everyone, keep the faith, get behind the team and the manager, as this season is going to be crucial for our future success in all competitions. Stick with the winners. Our next match: Everton at The Emirates on Sunday, 23rd February at 4.30pm (Premier League). Be there, if you can. Victoria Concordia Crescit.