Of course, having played for The Toffees for six years, they surely hold a special place in Mikel Arteta’s heart, and he will be just as keen (if not, more so) as anyone here on the red side at The Emirates today to capture a must-needed three points for us from this match. For the game, we see the return of Mesut Özil, along with a well-deserved start for Eddie Nketiah, whose style of play is a real breath of fresh air for us all. In the back four, a place is found again for Sead Kolašinac, whose physical presence could be crucial this afternoon, in this highly-charged contest against the Merseysiders.

And sure enough, within a minute of the start a terrible lapse of judgement in the back four between David Luiz and Shkodran Mustafi that led to Dominic Calvert-Lewin opening the scoring with an overhead kick, one that left our defenders completely flat-footed so early on in the game. Everton now had the bit between their teeth, and despite one or two attempts by us on the visitors’ goal, they controlled the midfield areas, so much so, that had it not been for some quick thinking by Shkodran Mustafi, goalscorer Dominic Calvert-Lewin may well have scored a second one after twelve minutes. Tragedy struck when the newly-returned Sead Kolašinac was substituted by Bukayo Saka due to a possible dislocated shoulder, and despite some excellent play by our midfielders, we were unable to penetrate the Everton defence; at least that was indeed the case until the twenty-sixth minute, when an amazing top-class cross from, who else, but the revelatory Bukayo Saka somehow got a superb ball over into the Everton penalty area for young Eddie Nketiah to leap into the air to connect and claim the equaliser. Six minutes later, running onto a pinpoint pass from David Luiz (inside the full-back Djibril Sidibe), Pierre-Emerick Aubameyang coolly slotted the ball past a helpless Jordan Pickford to score our second goal of the afternoon. Suddenly, we had shape, purpose and desire; despite one or two forays into our penalty area by the visitors (and a nasty challenge by Richarlison on Dani Ceballos which earned the former a yellow card for his trouble), it looked like we were heading into the break in the ascendancy, but during injury time, the wheels came off again. Richarlison made capital of some sloppy defensive play, along with some horrible indecisiveness from Bernd Leno via a header from Yerry Mina to grab Everton’s second goal of the afternoon. 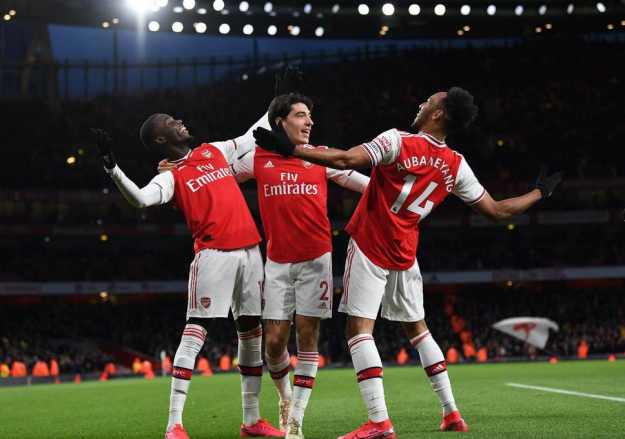 Just thirty-three seconds from the restart, our questions were answered. Out on the right wing, Nicolas Pépé turned the Everton defender and quickly crossed the ball for Pierre-Emerick Aubameyang to head home his second goal of the match, and Arsenal’s third of the afternoon. Now it was Everton’s turn to be under pressure, as time and time again we pushed forward looking for another goal to add to our tally. Overall, we started to look comfortable now, and although we were aware of possible problems from the visitors, we appeared to be in the driving seat somewhat. Having said that, the enemy is always complacency; Bernd Leno made a point-black save from Dominic Calvert-Lewin, and with fifteen minutes of the match remaining, Dani Ceballos was substituted for Lucas Torreira in order to bring a bit of steel to the proceedings. Everton still managed to sneak in, and twice in five minutes they were unlucky not to score, so with ten minutes remaining, we needed to stop the flow of play from the visitors urgently. Mattéo Guendouzi was brought on for Mesut Özil, who was anonymous in the second half. Hearts in our mouths, hope in our hearts, as the visitors asserted themselves and applied pressure to our defence. At the other end, Eddie Nketiah hit the crossbar with a fantastic, deceiving shot, and in the subsequent counter-attack Bernd Leno strongly stopped Richarlison from scoring in a heart-stopping one-on-one situation. In injury time, Dominic Calvert-Lewin’s header narrowly went by Bernd Leno’s right-hand post, and despite all this and more, we held on to take the winner’s garland.

Overall, in summary, it was a bit of a see-saw game, with fortunes oscillating between the two sides throughout, but in the end we did enough to hold on and win the match, although there were a few hairy moments here and there. We still have problems in defence, and concentration is a huge issue here. But looking forward, in the last two Premiership matches we have scored seven and conceded three, which is almost top four performance in anyone’s book. It’s looking like were are on the right path, but it certainly is going to take some time, this time. Remember everyone, keep the faith, get behind the team and the manager, as this season is going to be crucial for our future success in all competitions. Stick with the winners. Our next match: Olympiakos FC at The Emirates on Thursday 27th February at 8.00pm (Europa League). Be there, if you can. Victoria Concordia Crescit.

My Tweets
Join 98,808 other followers