So UEFA have apparently informed leagues that “null and void” is off the table. That a final league table must be produced to satisfy European placing.

What are the options?

The Premier League are pushing to complete the season behind closed doors. This is the best way to keep the integrity of the game.

Premier League rules are clear on what a season is:

Any other way of completing the season goes directly against the Premier League’s own rules. Rules which every club agrees to before each season begins.

The problem the Premier League faces is if they finish the season without every team playing every other team home and away, they will face legal challenges.

But completing the season will not be easy.

For a start, it must be completed by the 30th of June.

June 30th is important as this is when players contracts expire; and on July 1st, players that have agreed to join a new club become official players.

A resolution would not be simple. These players have contracts. UEFA (or the Premier League) could not simply say “we are extending every players contract by 1 month”.

For a contract to be valid their must be an offer and an agreement. A player would be in their right to turn down the contract.

There is also a problem for those players who have agreed to join a new club.

They would have signed contracts with that new club beginning of 1st July. So after 30th June, their contract with their current club would not be valid.

Why would a player agree to a temporary contract to remain at his current club if his new contract is at double the salary?

Then you have incoming players. Hakim Ziyech for Example.

Ziyech has agreed to join Chelsea from 1st July. If the season goes beyond July, would he be eligible to play?

The answer is yes (at the moment).

From 1st July, the player will be contracted with Chelsea, and the club would have submitted a valid registration to UEFA (or FIFA?).

The only rule that would stop him playing would be if he has already played for 2 different clubs in the same season. Ziyech would fall outside of this as he has only have played for Ajax. Chelsea would be his second club.

Any move by UEFA to bloke him from playing would see a legal challenge similar to that of the Bosman ruling. It would be a restriction of trade.

So we could be in a scenario where games played beyond June  involve sides that have different squads to what we have now.

Imagine the scenario where Arsenal complete a deal for Thomas Partey and he drives the club forward into the Champions League. Would that be fair?

Health is also a major issue.

Government on self-isolation will remain for some time.

Players and staff will be tested daily. This will mean positive tests for COVD19 even when there are no symptoms. In turn this will result in the individual player, and those who they have been in close contact with being self-isolated.

Remember Arsenal’s game against Manchester City was postponed due to Arsenal players being in self-isolation.

So let’s say Arsenal play Watford on a Saturday. On Sunday Pierre-Emerick Aubameyang tests positive for Covid19. That would mean most Arsenal players would have to self-isolate for 7 days.

With the Premier League hoping to play 3 games a week, that would be 3 games Arsenal would be without key players for.

Do the Premier League suspend the game (the match v Man City set a precedent), or do they treat the virus like any other illness and instruct Arsenal fulfil the fixture with players who are not self-isolating.

Watford players would also likely have to self-isolate for 7 days, as they all would have been in close contact with Aubameyang.

And we have not even begun players having to return to training to get fit for the remaining games – the earliest this could be is the 11th May.

Players will need a couple of weeks to get fully fit. So it is likely all games would have to be played in June to complete the season. A logistical nightmare.

Completing all games is the only way fair way to get final league table. But there are so many factors to be taken into account.

From players contracts through to how the league reacts to an outbreak in a club. Can they really fit 9 games into June?

If the season can not be completed, the Premier League ‘s 2nd choice is points per game.

This would see Arsenal move above Tottenham into 8th, Sheffield United move above Wolves into 5th.

If they also used it for relegation, it would see no change in the bottom 3.

But is this fair?

You could have a scenario at the top where Chelsea, in 4th, have a tough last 9 games of the season, whilst Arsenal in 10th have a relatively easy run in.

Arsenal finishing 4th is not impossible.

Likewise at the bottom Aston Villa have a game in hand on those teams above them. Win that and they would be 16th.

Arsenal also have a game in hand on many of those above them. A 3-0 win could see Arsenal move up into 6th place.

How can you have a league table based on current average points when 1 win either way could have big changes in the final league?

Points per game would go completely against the integrity of the competition.

UEFA’s preferred option is to have play-offs for European places.

You could take the league table as it is now and take the bottom 6 and have them play off for relegation.

Brighton in 15th are only 2 points ahead o Bournemouth in 18th, whilst they are 5 points behind Southampton in 14th.

It would be fair to assume that those from Brighton down are in the relegation battle. 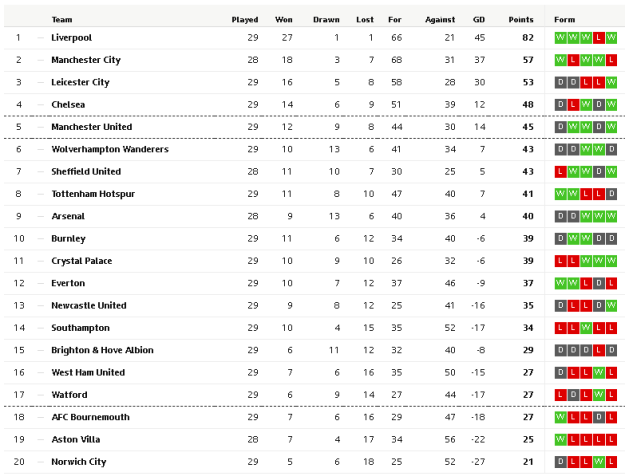 Have one off games – no home and away – with the team higher playing at home. Whoever wins stays up. Whoever loses go down.

That leaves the top 14 in the league. There are 7 European places (4 Champions League, 3 Europa League).

You repeat the process with Liverpool (1st) at home to Southampton (14th), Manchester City (2nd) at home to Newcastle (13th) and so on with Sheffield United (7th) at home to Tottenham the final fixture).

A one off fixture then establishes who is in Europe next season.

At this point you will know the 7 teams that will be in Europe next season.

The best way to then work out who should be in the Champions League and who in the Europa League would be a 2nd round of play-off games.

The highest ranked team in the league that has won their play off gets a bye into the Champions League – with the remaining 6 teams playing a one-off game to decide the other 3 Champions League teams.

The remaining 6 teams would play each other in the same way the original play-offs where scheduled. The highest ranking team left would play the lowest, with the highest playing at home.

The winners would be in the Champions League, the losers in the Europa League.

This is probably the fairest way to assign European positions as

It would also mean that clubs would only need to full fill 2 fixtures to complete the season.

The Football League could also follow a similar format to decide promotion and relegation down to League 2.

The problem with a play off is it could result with Liverpool, who have already qualified for the Champions League, not making Europe.

Imagine the scenario where Liverpool are beaten at home by Southampton. Would it be fair for them to not be in Europe? Likewise Manchester City and Leicester City are 12 and 8 points ahead of Manchester United in 5th place.

Burnley (10th) are not in a race for a Champions League place. But then Arsenal (9th) up are.

Is it really fair that teams who do not even have a hope of a Europa League spot with 9 games to go then enter a play off where 2 victories would see them in the Champions League?

If Southampton won their next 2 games, they would be 10th at best, not 4th.

Reducing a 38 game season to 2 games does not feel right, especially for the likes of Leicester City, Sheffield United and Wolves who have battled so well this season to be 3rd, 6th and 7th.

Play-offs would not give a “final league table” but would resolve, promotion, relegation and who is in Europe

UEFA and domestic leagues face head aches. No matter how they decide to finish the season, someone will lose out, and there will be legal challenges = and that includes even if the season is made null and void.

2 thoughts on “What is the fairest way to finish the Premier League season?”