During the weekly conference call between all employees of Arsenal, Raul Sanllehi reportedly informed staff that this summer will not see the big spending on transfers that precious summers have.

Whilst this is entirely predictable, some fans have used this information to bash the club, Raul, Edu and Stan Kroenke. These fans are deluded.

Having agreed a 12.5% pay cut with current players that will make Arsenal an annual saving of £30m, it would then be ludicrous to think that the club would then go out and spend big on new players.

If Arsenal did go out and spend £100m on new players, adding an extra £15-20m to the current wage bill, players would be in their right mind to question why they have been asked to sacrifice their own wage.

Before the wage bill increases from its current position of 12.5% below what it prior to the outbreak, Arsenal should firstly restore players wages to 100%.

If they can find £20m in wages for new players, it will not sit well with current players who have taken the hit.

Things do change if players are sold. That frees up salary to be used on new players – as long as those players come in with a contractual agreement to take a 12.5% pay cut.

Selling before investing will ensure the wage bill does not rise above what it is after the 12.5% pay cut has been factored in.

Those moaning that Arsenal will not go out into the transfer market and spend £100m really need to give their head a wobble and realise what is happening in the word.

The ArsenaL Supporters Trust estimate that a season behind closed doors will cost the club around £144m.

All members now have our latest financial analysis showing impact of COVID-19 on Arsenal. Playing Behind Closed Doors for a full season could lead to Club making a loss of £144m next yr – and that under positive assumption of qualifying for Europe & no loss of broadcast revenues

That figure is made up of £100m in match day revenue (gate receipts, merchandise, food and drink) and £40m in commercial deals (match day sponsors).

That is a huge chunk of change Arsenal are set to miss out on. And that is without factoring in any loss in European broadcasting revenue.

And it is not just Arsenal facing these issues, but every club in the Premier League – even Manchester City.

The worldwide economic fall out from Covid19 is going be as bad, if not worse, than the global recession that started in 2008. 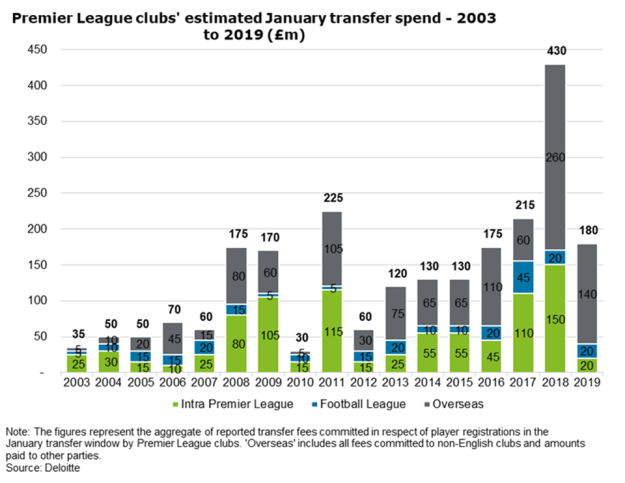 Across summer and January transfer windows, Premier League transfer spending increased by 252% in the space of 5 years.

From Roman Abramovich buying Chelsea in the summer 2003 through to the January 2009 transfer window, Premier League transfer spending increased at an unprecedented rate – and it was not only due to the Russian firing cash from his tank.

Increasing domestic broadcasting throughout the 00s and the explosion of overseas revenue meant Premier League clubs had more to spend than ever before. Than it came to a sudden stop.

It would take 5 years for the Premier League to return to their pre-recession spending: in 2013/14 £760m was spent across the 2 transfer windows.

What is more incredible about these figures is that it was 2008 when Sheikh Mansour bought Manchester City.

Were it not for Manchester City spending £125m in 2009/10, Premier League spending would have dropped by 50% from the season previous season.

The price of oil has plummeted during the Covid19 pandemic due to people driving and flying less. This will mean that even Manchester City will have to be careful with what they spend.

It is also unlikely that Newcastle will prop up the transfer market with their new Saudi owners like Manchester City did post-2008.

You see, the financial crisis football is facing isn’t just Stan Kroenke. It is Raul Sanllehi trying to do things on the cheap. It is real. And it is going to affect every club across the world.

Teams are going to have to work with reduced revenues. That will result in less money for transfers, less for wages.

If the world follows a similar path now to the recession, expect Arsenal’s spending to drop from the £153m we spent in 2019/20 to something closer to £50m a year for the foreseeable.

2019/20 has seen clubs spend £1.6bn on players. It saw newly promoted Aston Villa spend £143m, and 8 clubs spend over £95m. And that excludes Chelsea on a transfer ban and a Liverpool spending less than £10m.

Do not expect to see a return to these eye watering figures for a few years. At Arsenal or anywhere else.