So The Athletic ran an article this morning about how a fan has set up an “Arsenal phoenix club” with the aim of participating in next season’s Combined Counties Football League – the ninth tier of English football.

In the past we have discussed the possibility of an Arsenal phoenix team similar to that of  FC United of Manchester and AFC Wimbledon.

On the face of it, a phoenix club should be of interest to a few fans. But then you look deeper into the plans of Dial Square FC and you wonder just how it is associated with Arsenal bar the name.

Dial Square FC has been set up by Stuart Morgan.

Morgan told the Athletic  “The club has lost its identity in so many different ways. This Arsenal team, the club, the set-up, the stadium, is nothing like it was in its heyday.” It is a statement that we can all get behind.

He goes on “It’s so commercialised, I sit in club level. It’s soulless, it’s lifeless, it’s not Arsenal Football Club.”

And this is where it starts to fall apart.

He is complained that the club has changed too much, that is too commercialised, soulless, lifeless but then he talks about sitting in Club Level.

For those that don’t know, Club Level is the ring of seats above the bottom tier, and below the boxes. It was created by the club for commercial reasons – allowing richer fans to jump the season ticket waiting list if they were willing to pay double the season ticket cost.

So Morgan is moaning about the club not being what it was, without realising that every time he takes his seat in Club Level, he is part of the problem.

“The reason I wanted to do this project is to go back to beginning, to try and get back to that original Arsenal.”

There is not much green space in Islington. Not many football pitches. And to my knowledge there is no Kingsmeadow size ground (where AFC Wimbledon moved to). A phoenix club was always going to have to move out of the borough. Look at Haringey, Barnet or Camden. A move back down to Woolwich would also make sense.

But Morgan has not picked a borough near Islington, or Woolwich. He has not even decided to start start his phoenix club in London. He has decided to ground share with a side called Abbey Rangers who are based in Addlestone, Surrey.

So here is a Club Level season ticket holder moaning about how the club has lost it’s identity, and yet he is starting his phoenix club outside of London.

The intentions of Morgan need to be questioned.

Back in 2014, he set up Addlestone United FC. Their website shows them playing at the same Abbey Rangers ground that has been picked for Dial Square to play at.

Morgan claims that “we tried to find a suitable ground within our targeted location, but there was no option.” So the only suitable ground he could find was not in London, and one which he has previously hired for the previous club he set up?

Dial Square are not the first club which he has attempted to piggy back off Arsenal for. The Addlestone United crest contain a cannon and the motto “Victory Through Effort”. What has happened to this club? Is he still involved? 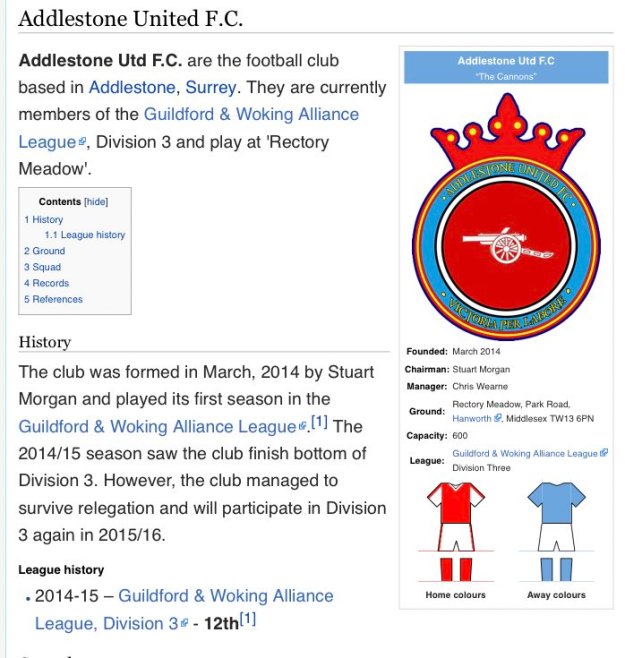 Why is he using Go Fund Me to raise funds? Surely if he is doing this for the love of Arsenal, he should be raising money through an equity release share scheme? Offer 200,000 shares for sale at £1 each, with all revenue raised going into the clubs funds? It would quadruple what he is after and give fans across the globe a share in this new “peoples club”.

When FCUM started, those driving it held public meetings to get fans agreements. The 3 founders of AFC Wimbledon involved the Wimbledon Independent Supporters’ Association before doing anything official. Where is AST, RedAction or ASIA’s involvement? Have they been asked? If so why are they not involved? At the moment it is just one man, using Arsenal’s demise, to raise £50,000 for his starter club.

This is not him going “back to the beginning”, this is an individual who has decided to start a football club near his home in Surrey and decided to piggy back on Arsenal’s problems for publicity.

Dial Square is not an Arsenal phoenix club. It is a team set up by an entitled man that sits in club level, moans about the club becoming too corporate, that it has lost its identity. A team set up outside of London.

Thanks Stuart. Good luck setting up your team. Your vanity project. But do not pretend it is an Arsenal phoenix club.