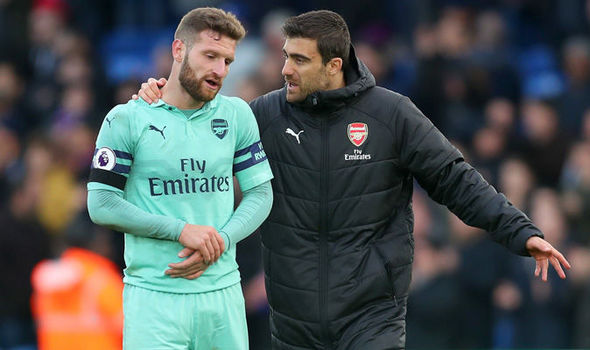 Social media is a strange place. A horrid place at times.

People think that because they are online, under a cloak of anonymity, that they can say vile things that they would not say in the real world.

The way some behave is a disgrace; whether it be making threats, abusing women, sexual harassment or just general poor taste and vileness.

Sadly Arsenal Twitter at times is a cesspit of disgusting behaviour.

We often see people tweeting abuse to other users, threatening them, childish name calling. All stuff that they would not do in the real world. The majority of those behaving this way are cowards. You do not see them at The Arsenal. You do not see them in the pubs before and after games.

They are faceless individuals – often foreign fans or children. They think it is big and brave, funny even, to put their hatred up on social media.

After the Leicester catastrophe, Arsenal centre back Shdoran Mustafi, like many players and clubs, tweeted his condolences

Saddened to hear of the 5 deaths in the helicopter crash. My thoughts and love are with everyone affected by the tragedy and all at @Lcfc 🙏🏼

Some of the responses are downright disgraceful.

At time when people are morning, and Mustafi is showing his respect to the dead, some so called Arsenal fans are replying to him, abusing him.

Some saying he should not be an Arsenal player, begging him to leave the club. Others going as far as saying they wish he was on the helicopter, wish he was dead.

Arsenal used to be a club of class. Remember who you are and what you represent. Sadly it seems the globalisation of football and rise of social media has meant that we have attracted some disgraceful individuals who have no class. They are simply not Arsenal.

We wonder why there is a disconnection between players and fans.

Gone are the days when players would walk into a pub in Islington after the game. Socialise with fans. These days they are in and out of the car park of the Emirates, trying to avoid meeting fans for fear of the abuse they would get.

At the end of the 89 DVD, the final story is about how the players all bundled into a pub in London, and how they were treated like kings.

I know players have changed, they no longer drink as much as they did during the Tuesday Club days, but they would not go into a pub, bar or restaurant due to the abuse.

They could win the Premier League and you would get a bellend having a go at Aaron Ramsey or Mesut Ozil. Probably with a camera in their hand so that they can record their “banter” and become Twitter famous for 2 minutes.

The abuse of Mustafi  in reply to his condolences tweet about Leicester is shameful. Those replying should be named and shamed.

Sadly they are faceless idiots. Going through the tweets, many are from foreign lands. Kenya, Nigeria, America.

These people are not Arsenal. They are just a load of people who like the club and think it’s funny to abuse a player paying his respects. The Arsenal has class these cling ons who think they have a affiliation with the club lack what The Arsenal is all about. 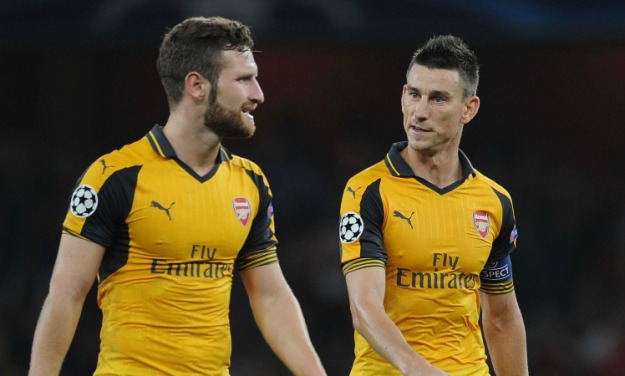 Arsenal have not conceded a clean sheet for 10 games. You have to go back to the League Cup home win against Reading on the 25th of October for our last one. Arsenal clearly have problems at the back.

Much of our defensive “problems” were supposed to have been sorted by the signing of Shkodran Mustafi for big money from Valencia. And whilst he has been a terrific signing, and he is yet to lose a game in an Arsenal shirt, he has certainly not solved Arsenal’s defensive problems:

In the last two years, or lack of success has been firmly blamed on our defence, and on one defender in particular, Per Mertesacker. But this ignores the facts.

In 205/16 Petr Cech kept more clean sheets than any other goal keeper, Arsenal conceded as many goals as Leicester, and just 1 more than the leagues two stingiest defences, Man U and Spurs.

The year before was not too much different. Arsenal were once again 3rd in the league when it came to ‘goals conceded’ Only Southampton and Champions Chelsea conceding less.

So what has happened at Arsenal? If Mustafi has so obviously (to many fans eyes) improved out defence, why has it seemingly gone backwards?

The first problem is our eyes often deceive us.

Per Mertesacker was often labelled a weak link as when he was beaten, our made an error, he would rarely be in the picture when a goal was scored. Where as when Mustafi and Laurent Koscielny make errors, it is not as obvious.

This year Arsenal have given their opponents a lot of chances. And a lot of these come from Mustafi and Koscielny’s lack of positional awareness.

Neither are as good positionally as Mertesacker, nor are they as good at organising the defence. What this leads to is a massive gap between the two defenders, leaving a lot of space for strikers to slip in between and get a chance. From Cavani in the Champions League, to lowly Ludogorets, our defence gives opponents very clear chances.

Even when we beat Ludogorets 6-0, the chicken farmers still had 10 shots and it was only poor finishing that stopped them scoring.

The weakness with Per Mertesacker was when a ball went in behind Hector Bellerin, Mertesacker would not have the pace to get across him. So Koscielny at left sided centre back would have to undercut the big German to get across to the opponent. This would then leave Mertesacker labouring to get back in the middle to cover whoever had run through from the away team. Koscielny wouldn’t get to the right quick enough, Mertesacker would be nowhere near anyone, Nacho Monreal would fail to drop inside to cover, and our opponents would be left with a simple tap in if the squared ball was right.

Signing Mustafi has meant that Koscielny no longer needs to undercut, but it has created another problem.

Mustafi go’s right, and Koscielny is not covering his centre back partner, leaving a big gap between the two centre backs that a striker is exploiting.

A major reason why Koscielny is not covering is he is so concerned about Monreal. He is trying to cover his right back when he should be covering his centre back. It does not help when Alex Iwobi is also not covering his full back, so Monreal can not fully commit to covering the middle.

I do think Mustafi and Koscielny could develop into a decent defensive partnership, but it is clear that at the moment Arsenal’s defence is not keeping enough clean sheets.

Koscielny’s positioning has always been his weakness. I have got a lot of abuse for saying this before. But this probably highlights who knows football and who doesn’t. Koscielny has been caught out a lot inf the past. Too high up the field, too far left, diving in when a player is not a danger.

There is a reason why Koscielny has conceded more penalties than any other Premier League player since 2010. Because he is always out of position and having to lunge in to win the ball.

Koscielny has always performed better when he has a leader next to him. Someone who can organise him, direct him. Mustafi looks a classy player, better than Mertesacker, but at the moment the defence is struggling with positional organisation. I am a big believer of the effect games such as FIFA has on people. Many did not rate Mertesacker purely because they could not defend with him on computer games.

Good defences always work on partnerships. You have a leader. Tony Adams, John Terry, Laurent Blanc, Nemanja Vidic. Arsenal currently do not have this out and out defensive leader. Manchester City have spent £150m trying to find one.

Mustafi could grow into the leader of the defence over the next 6 months, but at the moment he is the junior partner to Koscielny.

Arsenal defensive frailties have become worse this season. Mustafi has solved one problem but created another.