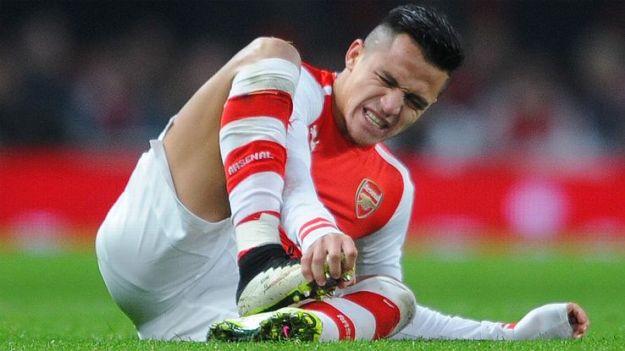 Why the hell has Alexis Sanchez gone to Switzerland?

The game is pretty much a dead rubber, with Arsenal relying on PSG to lose at home to a bunch of Bulgarian goat farmers to be within a chance of topping the group. And with the way other groups are, it pretty much makes no difference this year if we finish 1st or 2nd in the group, with regards as to who we play in the next round.

Yes, I understand those flying out today have spent good money, so deserve to see a good team. And I imagine their is pressure from sponsors for Arsene Wenger to play the big players on the big stage, but in the grand scheme of a season, tonight’s game is pretty much meaningless.

So why is Alexis Sanchez on the plane?

Between the game against Manchester United and the FA Cup tie against Preston in January, Arsenal have 13 games in 50 days. That is 1 game every 3.8 days. A hectic schedule. To ensure we have the best chance in the Premier League, we need to rest and rotate when we can, and today is an ideal opportunity.

It is not just the 90 minutes, but what go’s on around that 90 minutes. The mental and physical preparation required. The travelling. The flights. The hotels.

Arsene Wenger could, and should, have given all first team players the week off.

On Sunday they should have all been in for a rehabilitation session. Stretching. Yoga. Ice baths. Get the muscles repairing after the West Ham tie. Then give them Monday off. Unless they want to see the physio, they should not be seen at the training ground. A day playing golf, a bit of Christmas shopping. A day to rest their body and minds.

Then today, they should all be at the training ground participating in a light training session. Nothing to strenuous. Just some more stretching, yoga, some light gym work. Let the bodies fully recover.

Tomorrow, back to full training, preparing for Stoke City on Saturday.

In the past we have seen players pick up minor injuries – which at Arsenal always seem to turn into major injuries – due to being over played. Due to being in their red zone. Due to not getting a little break.

Taking into account that Alexis Sanchez has been flying around the globe for the last 2 years representing Chile, as well as his non-stop performances for Arsenal, he needs to be given a rest.

Sanchez might not be happy about being told to rest. He comes across as the type of character who wants to play all the time. He will probably sulk. But that is where Wenger needs to manage him. Explain why he isn’t playing him. Tell him to go and chill with his dogs for a few days.

It just seems silly that Sanchez is in Switzerland.

3 thoughts on “Silly Sanchez in Switzerland”