Arsene Wenger was a silly boy on Sunday. He made a mistake pushing referee Anthony Taylor in those tense closing minutes having been given his marching orders by Jon Moss. But the fall out in the media has been hilarious, with journalists far and wide calling for all sorts of punishments, from having to manage Sunday league football, through to a 10 game touchline ban.

Below are a collection of our favourites so far:

First up is Tony Evans in the Evening Standard. Now before I start, a little rant.

Why does the Evening Standard, a London based paper which reports on what is happening in London, employ a Scouser who supports Liverpool to give his view on the weekend’s game? The man is a scab who is still happy to get a pay day from News International when working on TalkSport. 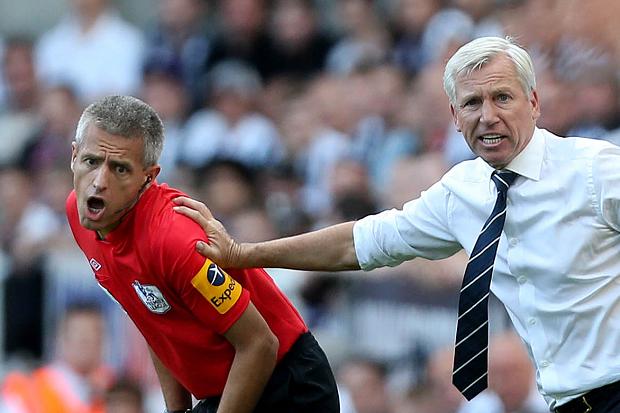 Evans calls for Wenger to be hit with a 10-game ban. Now back in 2012, Alan Pardew shoved an assistant referee. I have looked through the archives of all the papers Evans has worked (and subsequently been let go) for and at no point did he write anything on Alan Pardew. Let alone call for a 10-game ban.

Pardew got a 2-game ban and a £20,000 fine. Surely a precedent set by the FA that they will have to stick with – anymore and Arsenal will win any sort of appeal. But Evans, like every other journalist, seems to be ignoring the Pardew incident.

Why is Evans so demanding, vocal, about Wenger, but was so silent about Pardew? Is it because he is still bitter about 1989 – like so many Liverpool journalists; or still upset Arsenal fans cheered when it was announced that trains back to Liverpool for Everton fans had been cancelled?

Most likely, he knows that a story about Pardew pushing a referee is not of public interest. A call for him to get a 10-game ban will not get the hits. Meanwhile he knows that by beating Wenger with the shitty-stick, the hits will role in.

Instead of a limp fine or weak touchline ban, make managers ref 10 Sunday league games. Community service – and a lesson in how hard it is https://t.co/2D4MXVAoYF

The Times Chief Sports Writer, Matt Dickinson, suggests an alternative punishment. A community service order. He claims that Arsene Wenger should be forced to manage a Sunday League game for 10 games so that he can learn “a lesson in how hard it is”.

Firstly Wenger knows how hard it is, he manages at the highest level of the game, where the stresses and strains are felt the most. If his side loses a game, he suffers abuse and questions about his future. He has to live football, 24 hours a day, 7 days a week. Of course, he is rewarded handsomely for it.

Without wishing to demean a Sunday League manager, if they lose, they do not dwell on it, they head straight down the boozer and have a beer with their players. On Monday they go to work at their office job, or on a building site, and forget about football.

Managing in the Sunday league would be a cake walk for Wenger.

As for the demand that it is community service, lightly pushing an assistant in a moment of madness is not exactly up there with Eric Cantona karate kicking a fan.

Clearly Matt Dickinson is after some attention, realising that an outlandish, random suggestion of a punishment will get him that attention and build is profile. Afterall, it is an online profile that all journalists need now to become successful, it is no longer about the quality of their writing.

Maybe the next time a journalist is found to have written a fake story, or exaggerated the facts, they should be forced to go and write for a local free paper for 10-weeks. That way they can learn a lesson of how hard real journalism is.

Following in the footsteps of Tony Evans, we have James Olley, The Evening Standard’s Chief Football Correspondent.

Now some of you might not know this, but James Olley is an Arsenal fan. In his article in last nights Evening Standard, he claims that he has been informed by a source that Arsene Wenger called Jon Moss a “cheat”. I have a feeling he has made this up.

And why would an Arsenal fan in the media make something up that harms the club and its management? For clicks! We have it again, another journalist with a sensationalist view point, making things up, for hits and attention. To repeat, in the current world of journalism, it is all about how far your articles reach and how many hits they garner, rather than the quality and truthfulness of your story.

It is why we are seeing the rise of fake news. It is all about the advertising revenue, driven by how many people click your links. Better to have a poor journalist who gets hundreds of thousands of hits due to 10s of thousands of followers on Twitter, than a good journalist who has little online presence, but is a bloody good writer.

At no point does Olley indicate who his source is. It could be just a bloke in the crowd. It could be the magical leprechaun that sits on his shoulder, or maybe he went on a bit of a session with Tony Evans after the game, and between them they concocted the stories that they both created to ensure a big pay day for the Evening Standard. Well that is what my source told me anyway. Can’t reveal them though.

Penultimately we come onto Keith Hackett.

Former Premier League referee. Former referees’ assessor. General manager of the Professional Game Match Officials Board. A man who in 2009, had to apologise to Arsene Wenger when the Frenchman was sent off in a game against Manchester United by Mike Dean for that horrendous crime of kicking over a water bottle.

Hackett says that a 1 or 2 game ban for Wenger “will not cut it on this occasion”. Hackett is another one who said nothing about Alan Pardew’s incident in 2012. Why is it that he was silent then, but so noisy now?

He go’s on to say Wenger should receive a 6 game, full stadium ban, going against the precedent that the FA set with Alan Pardew.

In his article, it is interesting that Hackett writes a good few hundred words on Wenger’s behaviour and assault on Anthony Taylor, but does not at any point mention Sean Dyche’s 90 minute verbal assault on Taylor.

Whilst what Wenger did was wrong, and Hackett is right that it does send out the wrong message to the wider football world, what Dyche did was equally wrong. 90 minutes of shouting and screaming at the referee.

Why has Hackett decided to only put across what Wenger did, rather than do the fair thing and also mention that Dyche’s behaviour over 90 minutes was also despicable? Of course, its because Dyche is a nobody who manages a tiny club up North. An article calling for a ban for him due to verbally assaulting a referee for 90 minutes just won’t get the hits.

English FA finally charge Arsene Wenger with misconduct.
Only had to attack a referee for them to take action… #AFC

The less said about Deluded Duncan the better.

I imagine throughout today, other journalists will realise that a ludicrous article calling for all sorted of weird punishments for Arsene Wenger will get them hits. I imagine this is not the end of the matter.

Also if you want to read the response from some but hurt Burnley fans, have a look at our comments page from the morning blog.

And how they will all moan, write more articles, and complain, when the FA are forced to follow their own precedent and give Wenger just a 2 game ban.

Arsene Wenger should be given a  2-match ban, a fine, and a warning about his future behaviour. No more, no less. End of debate.

1 thought on “The Ludicrous Response to Arsene Wenger’s Push”