By now you all would have seen the Big Dave Ornstein news from a few last night.

That Arsenal are in talks to sign Uruguayan defensive midfielder Lucas Torriera.

Torreira often presented as a Verratti-type and there is some justification for that given shared background at Pescara and switch of position. Less sexy but as important IMO is his overlooked ability as a ball winner. Helluva shot on him too when he ventures forward

Usually when Ornstein tweets, the deal is not too far from being done, so we can afford ourselves to consider just how the Sampdoria midfielder will fit in at Arsenal.

Signing Lucas Torriera would support my view that we will play 3 in the middle next year;

Ahead of them will be a narrow two of Mesut Ozil and Henrik Mkhitaryan, with Pierre-Emerick Aubameyang up top.

The midfield 3 will give us a lot more balance and defensive stability than we had last season when we often played two.

It will give Aaron Ramsey the licence to get forward and attack the opponents box. It will also free him to press high up the field, putting pressure on the opponents deep lying midfielders. 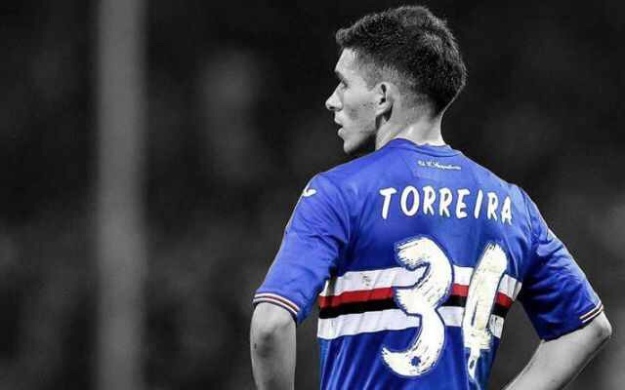 With Ramsey getting forward alongside Ozil and Mkhitaryan, it will over load the opponents who will struggle to defend against all 3 – probably forcing them to bring a centre back out of shape create space for Aubameyang behind.

Ramsey will be free to press forward knowing that he has Granit Xhaka and Torriera sitting behind him, in front of the back 4

With both men having the ability to play from deep, it will give the defenders two options when passing the ball out.

Opponents will not as easily be able to pick off us transitioning the ball from defence to attack with both Torriera and Xhaka. Last season, if they stuck a man on Xhaka, it forced us long, or into mistakes.

Torreira will move Xhaka forward one, allowing him to press higher and be more influential on the ball.

Last year he was often caught out trying to press high, leaving too much of a gap between defence and midfield.

He will be free to do a similar job next season, but know that there is an extra player behind the him to sweep up to mistakes (instead of opponents being straight at the back 4 when he gives the ball away).

Xhaka has always been at his best for club and country when he has had another midfielder behind him. He has never really been the deepest of the midfielders.

Xhaka will also have to be the muscle in the midfield.

Torriera is tiny so Xhaka will have to ensure he does not get bullied. A similar role to what Matic used to do alongside Kante when Chelsea won the title.

I would be a liar if I pretended to know anything about Torriera, but in the little bit of research I have done, he will bring balance to a midfield.

It will also leave us with a second string trio of:

We now just need to get the deal over the line.

1 thought on “How does Lucas Torriera fit into Arsenal?”