The first block of pre-season games are over as Arsenal fly from Singapore to Dublin to continue their preparation in Europe.

For those of us not lucky enough to be in Singapore, the JW Diaries is a great read.

Whilst it is just pre-season, and therefore the usual disclaimer of not reading too much into it, there are some very clear positives to be had.

The first is the togetherness of the squad.

Everyone seems to be enjoying themselves, getting on with each other, having a bit of fun. In the middle of it all is Pierre-Emerick Aubameyang. 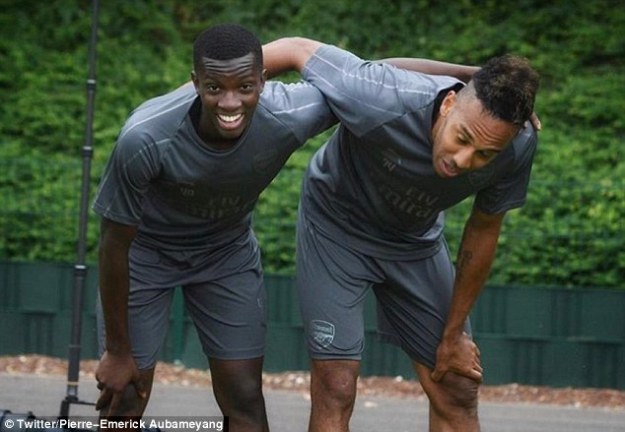 The Gabon strikers attitude has stuck two fingers up at the press who labelled him a flashy arrogant party boy when he signed. Clearly talented, and clearly humorous, he is bringing the squad together.

There will always be cliques in every squad. Arsenal have 3 big ones – the English lads, the French lads and the German / Bundesliga lads.

Aubameyang was born in France, lived in Italy for 4 years, and Germany for 5. He is multi-lingual, speaking English, French and Germany. He is able cross over all 3 groups, bringing them together with his personality and positive attitude. He is the centre of attention.

The players seem to be freer, and hopefully this continues when the players turn out in front of the home fans at the Emirates.

We also saw Mesut Ozil captain the side against PSG.

Whilst I do not expect him to be club captain this season, he is a senior professional, a leader, and making him captain against PSG was a masterstroke after everything he has been through.

Ozil is, and always will be, a player who needs an arm put round him. He needs to feel loved. Arsenal and Emery have gone on the charm offensive since the Germany fall-out, making it clear that Arsenal is his home, that the players are his family.

These people are not Arsenal fans. They never say anything positive about the players or the club. They are a minority, probably actually just a dozen or so idiots, but their energy is not wanted at the club these days. Any real Arsenal fan will be getting behind the club, getting behind Ozil.

The performances by some of our youngsters is also something to get a little bit excited about.

New boy Matteo Guendouzi put in a mature performance in central midfield against PSG, where he was Man of the Match.

He dominated the play, breaking it up and moving the ball on.

He only turned 19 in April and at 6ft 1in still has some filling out to do. It is way to early to be calling for him to start against Manchester City, but it is going to be exciting to watch his development in the Europa League and League Cup.

At £7million, Guendouzi could be one of the signings of the summer, and just shows the benefit of having Sven “diamond eye” Mislintat in change of recruitment.

With Lucas Torreira at 22 and Ainsley Maitland-Niles turning 21 in August, we have an abundance of talented young central midfielders – of all who bring something completely different to the side.

The progress of some of the young English players has also been enjoyable to watch.

Emile Smith Rowe and Eddie Nketiah have both looked good pre-season. Reiss Nelson has also shown flashes of his talent, and the aforementioned Maitland-Niles has continued his progress.

These guys will be important for Arsenal’s future due to restrictions on home grown players.

Whilst it is perhaps 12 months to early to be talking about them taking over from Alex Iwobi and Danny Welbeck, Smith Rowe, Nketiah and Nelson will know that there are regular first team squad places up for grabs in 2019.

All in all, a good start to pre-season. It is Chelsea in Dublin on Wednesday before Lazio in Stockholm on Saturday.

I expect that we will have news about both Aaron Ramsey and Ivan Gazidis this week, as both the transfer deadline day and start of the season hurtle towards us.

The Championship starts this weekend!!!!