Tonight we play the defending champions of the Azerbaijan Premier League, who sadly didn’t manage to qualify for the UEFA Champions League in the summer; after a process of elimination they now find themselves playing us in Group E of the UEFA Europa League. The team known as “The Horsemen” are currently occupying third position in their league, and normally play their matches at the 5,800 capacity Azersun Arena, but for the purposes of European competition travel to the 68,700 capacity Baku Olympic Stadium where we will be meeting them on the field of battle tonight. Qarabağ FK are 66th in the UEFA club rankings table (Arsenal are in ninth position), and have played 86 matches in various European competitions; their playing history of 32 wins, 22 draws and 32 defeats must surely speak for itself, 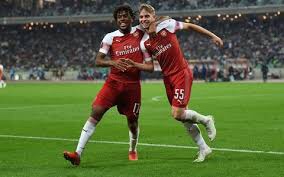 With some of our top players missing (Pierre-Emerick Aubameyang through illness, Aaron Ramsey because his wife is about to give birth to twins and Henrikh Mkhitaryan due to political shenanigans between his home country and Azerbaijan), we started the match in the best possible way, despite sporting a highly unusual and contrversial 3-4-3 formation. After just four minutes, a Mattéo Guendouzi corner was headed goalwards by Nacho Monreal; somehow Sokratis got in the way and clumsily guided the ball into the back of the net. Not ones to look a gift goal in the mouth, Arsenal kept going and for the next ten minutes or so, looked as if we were going to increase our goal tally. Not so. Qarabağ stepped up to the plate and not only ran at us, but their strikers were finding gaps in the midfield to break through, which caused a problematic situation in our defence. Emile Smith-Rowe was desperately unlucky not to score with a chance from a fluid movement that he initially started, but all in all we were mighty glad when the half-time whistle blew.

On our return for the second half, Nacho Monreal was substituted for Lucas Torreira and things started to step up a bit. Mr. Emery dispensed with this ridiculous 3-4-3 idea and went back to a more familiar formation which oscillated somewhere between 4-2-3-1 and 5-3-2 depending on the danger. Anyway, three minutes afer the restart, Emile Smith-Rowe scored his first goal for the club, and a well-taken finish it was too, with a tasteful flick from Danny Welbeck into the path of Alex Iwobi who glided the ball into space for Emile Smith-Rowe to tuck it away for the second Arsenal goal of the night. A few minutes later, the Arsenal Academy graduate made way for Mesut Özil, and on seventy minutes Alexandre Lacazette replaced Alex Iwobi as well. Although Qarabağ had some interesting ideas with regards to the interraction of the ball between their midfield players, all their clever play was in vain, when Mattéo Guendouzi put the match beyond doubt eleven minutes from time, to not only seal our victory but also ensure that we sit comfortably at the pinnacle of Group E in the Europa League, equal on points with our next opponents, Sporting Club of Lisbon, who we meet in the away fixture on 25th October.

Despite a very good and satisfying win, we have an extremely annoying habit (that doesn’t go away) of losing concentration at vital points in the match and simply gifting opportunities to the opposition, which if not addressed will come back to haunt us one day soon, probably against Liverpool in November, unfortuntely. Bernd Leno was exposed at times in the first half, and his skill plus agility managed to keep out Qarabağ adequately. Despite all this, the lads played well (particularly the Academy boys, Alex Iwobi and Emile Smith-Rowe), and our inspired substitutes from an ever-confident bench are starting to look just as strong as the starting eleven. After all, eight wins in a row across all competitions at the highest level in this day and age is nothing to be sneezed at, and the chaps must surely feel confident going into the London derby against Fulham on Sunday lunchtime. Can’t wait! Remember everyone, keep the faith, get behind the team and the manager, as these early days are going to be crucial for our future success in all competitions. Stick with the winners.

My Tweets
Join 96,547 other followers