Last night it was announced that Arsenal had promoted Sven Mislintat from Head of Recruitment to Technical Director.

By promoting a scout whose vision of the game is about unearthing stars of the the future gives you a peak into Arsenal’s future.

The club will look to recruit young, exciting talent, and develop that talent into global superstars.

A return to Arsene Wenger’s early philosophy of making, not buying superstars

Earlier this week I had a little discussion with someone over the N’Golo Kante deal.

It was reported by Football Leaks that his agents had pocketed £10.6m from the deal, which would go some way to explaining why Arsenal did not follow up their interest.

Under Arsene Wenger, rightly or wrongly, we often pulled out of deals that saw a huge chunk of money going to agents.

Wenger was a ”purist” and detested agents taking money out of the game. He hated the likes of the Anelka’s who would unsettle their own client and move them from club to club, making millions of pounds in the process.

Sadly to compete for the best players, you have to be willing to deal with the likes of Jorge Mendes and Mino Raiola. Dealing with these individuals is a huge reason why Raul Sanllehi was bought in.

The conversation went beyond agents fees and also discussed that Arsenal are still a way behind the likes of Manchester United in terms of wages paid.

Whilst that is a huge amount, it is €100m less than United, whilst Barcelona pay out more than twice in wages than Arsenal.

Wages are often the key to success. The rule of thumb is the more you spend in wages, the more higher you finish up the table. This is obviously on average, so there will always be exceptions to the rule such as Leicester.

What is clear is that Arsenal are still not eating from the top table. We are still unable to pay the top wages to attract the best players. We are still a 2nd tier club behind the likes of Barcelona, Real Madrid and Manchester United.

But we were told we moved from Highbury to enable us to compete.

And that was the plan.

The gate receipts from the emirates were meant to bring us back level with the likes of Manchester United and Barcelona – who at the time were doubling our gate receipt income.

Back in the early 00s, gate receipts were king. They were the main source of income.

But the game moved on. TV money and commercial deals are now more important than what comes through the gate. 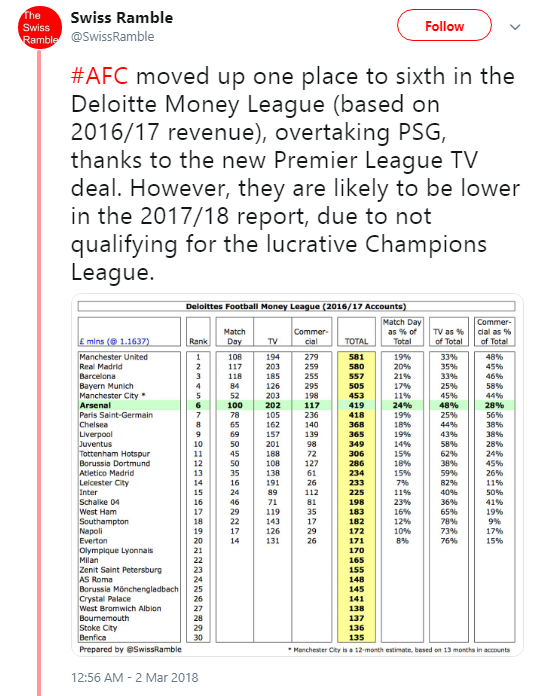 Moving to the Emirates means that Arsenal have the 4th highest gate receipts in world football – behind the big 3 of Man U, Barcelona and Real Madrid. There is not that much in it. TV deals are also fairly neutral – although the figures above are prior to Arsenal failing to qualify for the Champions League.

What is clear is how far Arsenal fall behind when it comes to commercial revenue.

4th in gate receipts but just 10th in commercial revenue – and £162m less than Manchester United.

When we moved, we could not have predicted that the world would change to the extent it has, and that commercial profits would be king.

The thing with commercial income is it is slightly beyond our control. Manchester United, Barcelona and Real Madrid are bigger brands than Arsenal, so will naturally command more from Nike, Adidas, Emirates, AON, etc, for deals.

We are over €100m behind Manchester United in salaries paid and €162m a year behind in commercial revenue. We are still at the 2nd tier. Not at the top table.

Well we should not have moved then you cry.

We would have a similar total revenue as Liverpool – who have won just a single trophy in 10 years. We would be even more reliant on selling players to generate income (Liverpool have sold over £400m worth of players in 5 years, Arsenal just £200m).

The move to the Emirates was supposed to close the gap between Arsenal and those on the top table. The explosion of commercial deals (and Billionaire Boys Clubs) have meant that the move has basically allowed us to maintain our place as a second tier club in European club football.

Hopefully with the new Adidas deal, the Rwanada deal, and other new commercial deals, we will see that gap close up, allowing us to be more competitive.

By promoting Mislintat, Arsenal have shown great self awareness.

We do not have an owner who will pump in £2.7bn of his own, and neither should we expect him to do so.

In European football at the moment, it is only PSG and Man City who have owners bankrolling them. Roman has turned the tap off. Every other club is (attempting at least) to run a self sufficient model. You spend what you bring in.

With a great coach like Unai Emery, and the promotion of Mislintat, Arsenal will continue buying the next global superstars. Lucas Torreira and Matteo Guendouzi rather than N’Golo Kante and Paul Pogba.

Some might see this as the wrong route. That we should be spending hundreds of millions a year on transfers, but this not realistic.

Arsenal are not going to suddenly magic up another £100-150m a year to fund the big transfers.

As Dortmund, Monaco, Atlético Madrid, Liverpool & Napoli have shown, you can build a competitive team through sensible recruitment rather than big money signings.

It is about how you buy, not what you spend.

And Mislintat is key to the future of the club.