Arsenal are exactly where they should be. 5th in the table.

Fifth for Arsenal is par. They are not over achieving, and not underachieving. Some fans might scoff at this comment, but that is the truth.

Why is 5th our par? Well because we currently have the 5th highest wage bill in the Premier League. 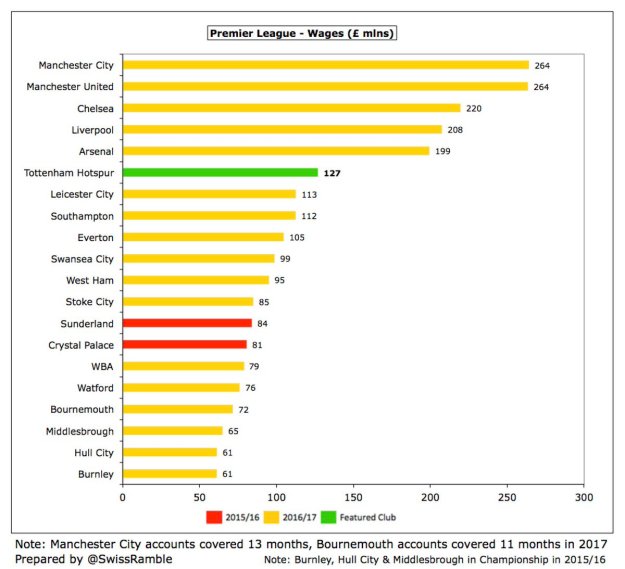 * 2016/17 are the most up to date accounts for all clubs. Arsenal’s wage bill would have risen since then, but so would every other side

Statics show that success and wage bill are directly linked in the Premier League. The more you spend on wages, the higher you finish in the league. The best predictor of success is the squad’s total wage bill

This was highlighted in the brilliant book “Soccernomics”, written by Simon Kuper and Stefan Szymanski.

High wages attract good players. The higher the wage bill, the better the team typically performs. Averaged over 10 seasons, correlation between wage bill and final league position is about 90 per cent, said Stefan Szymanski, an economist at the University of Michigan.

The results of their 10 year study are clear and obvious.

For every Leicester (and once in a generation thing) who win the league, you have a QPR who got relegated with the 8th highest wage bill in the Premier League.

The majority of the time, the over and under performance against wage are not that extreme. Look at Leicester City now. They have the 7th highest wage bill in the league, and currently sit 8th.

At the top of the league we see a couple of examples of over and under performances.

Arsenal’s period of success from 1998 – 2004 came when they have the second highest wage bill in the league. Manchester United had the highest, and won more league titles over the period. Finishing top for Arsenal during that time was not a huge over achievement. In fact, if Arsenal finished 3rd this season, it will be a bigger jump from wage predicted finish to actual finish than that was.

The easiest and quickest way to move up the league table would be to sign better players, and those better players will command higher wages.

Manchester City and Manchester United both spend £65 million more on wages than Arsenal. That is £1.25 million a week. Or the equivalent of 6 players on £200,000 a week.

Imagine how much better Arsenal would be if they had an additional 6 players on £200,000 a week. That is an extra 6 World Class players to go alongside Lucas Torreira and Pierre-Emerick Aubameyang.

Often when you look at Manchester City’s bench, every player is earning over £100,000 a week. They are able to accommodate Kevin de Bruyne, David Silva, Bernardo Silva, Riyad Mahrez, Leroy Sane & Raheem Sterling because of what they pay them all.

According to reports, Arsenal have 8 players who earn above £100,000 a week. Manchester City have 13.

The problem Arsenal then face is as a self-sufficient club, we are pretty much at our breaking point when it comes to salary. With our current revenue, we do not have much space to increase our total wage.

Before we increase wages, spending more money on better players, we need to increase our revenue.

An increase in TV money will increase the clubs revenue. However it also increases the revenue of all clubs. So we would get an extra £20 million, but so would Manchester City, Chelsea and Liverpool. The revenue we need to increase is our own commercial revenue.

It is through commercial revenue that Manchester United are able to sustain such a high wage bill whilst their owners do not put any money in (the Glazier’s actually take out over £18 million a year).

Week has already been done on this. Visit Rwanda is a £10 million a year deal. The Adidas deal is worth £60 million a year (up £30 million from what we received from Puma). The Rwanda deal is a huge reason we could afford to pay Pierre-Emerick Aubameyang and Mesut Ozil what they wanted.

If all of the Adidas deal is plunged into wages, we could sign 4 players on £150,000 a week – and that is without taking into account the wages saved on the players departing.

One limiting factor is no Champions League.

In total it cost Arsenal closer to £30 million not being in the Champions League, as match day revenue and gate receipts would have been higher as well.

The thing with Champions League football is no club can rely on it as an income. with 6 teams gunning for 4 positions, it is a toss up every year who qualifies.

In the last 5 years, every team in the “big 6” bar Manchester City have failed to qualify for the Champions League.

Manchester United are a very good example of a team who is spending poorly.

They have the 2nd highest wage bill, not much difference from Manchester City, but there is a huge gulf between squads. Manchester United have given big wages to the likes of Ashley Young and Antonio Valencia; whilst Paul Pogba is the highest paid player in both squads.

Arsenal could spend their £200 million better.

The big wages paid to Mesut Ozil, in hindsight, was a poor deal.

That is just shy of £20 million in salary that is set to drop off the wage bill this summer. Arsenal need to spend this money smarter than we currently do.

Look at Laurent Koscielny and Calum Chambers. On a reported combined £125,000 a week. We could use that £125,000 and spend it on a single, top class central defender replacing the pair.

Carl Jenkinson and Krystian Bielek earn £50,000 a week. That is reportedly the same as what Lucas Torreira earns.

Torreira is a brilliant example of spending smart.

With intelligent recruitment, we can purchase better players than what we have,without seeing as spike in the wage bill. This would then lead us to outperforming the wage prediction matrix.

So ultimately, arsenal are where they should be taking into account the resource available. we are neither under performing or over performing.

For us to move forward, it comes down to the two usual factors:

The new regime have been operating for less than a year. Their first job has been to clear the decks. By this summer, we would have seen 40% of Arsene Wenger’s final squad leave the club since Sven Mislintat joined the club.

Once the decks are cleared, we can then recruit what we need to take us forward.

1 thought on “Arsenal in “par position””